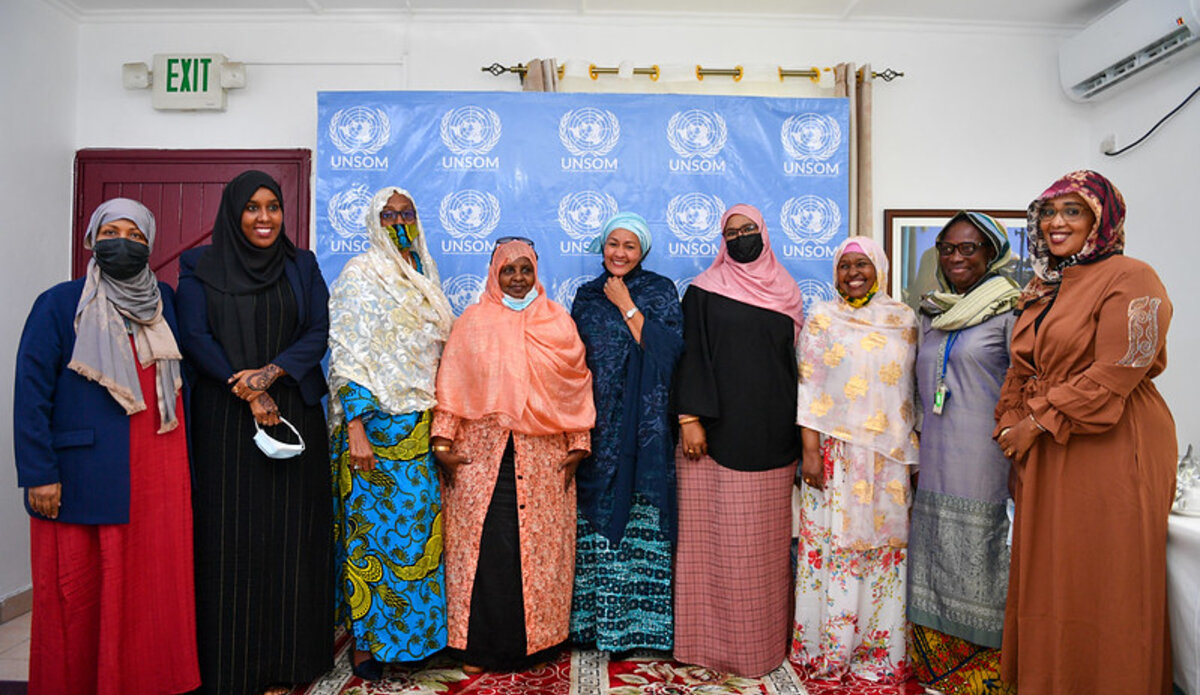 Advancing gender equality and the Women, Peace and Security (WPS) Agenda is an integral part of the work of the United Nations Assistance Mission in Somalia (UNSOM).

It is one of UNSOM’s mandated obligations to ensure that gender and WPS issues are addressed in and advanced through the overall Mission mandate delivery, including in its political work, policy advocacy, assistance to peacebuilding and state-building, governance, security and justice sector reform.

Gender equality and empowerment of women are fundamental in ensuring that peace and progress are equitable, and that they benefit women and men equally while protecting human rights of all without discrimination, biases and prejudice. Somali women’s political empowerment is critical in establishing an inclusive, fair and just Somalia. This includes their participation in decision-making and leadership roles, in conflict prevention, peace and political processes as well as in public institutions and elected positions.

Through its work on political and electoral support, human rights, rule of law and justice promotion, UNSOM makes conscious and deliberate efforts to ensure that women’s rights, political participation and gender equality as an agenda is fully integrated and promoted.

Implementation of the Women, Peace and Security Agenda

The landmark UN Security Council Resolution 1325 on Women, Peace and Security (UNSCR 1325), and all subsequent resolutions on WPS, form the main framework of the WPS agenda.

Guided by the principles of non-discrimination – as outlined in the Convention on the Elimination of All Forms of Discrimination Against Women (CEDAW) – and promotion of women’s participation and protection, UNSOM’s gender work is focused on improving and increasing women’s role, voice, access, representation, and participation in politics, decision-making and leadership.

In addition to providing support to the federal government of Somalia, UNSOM works with a range of civil society leaders, organizations and networks. Promoting and strengthening civil society’s voice and participation, particularly of women leaders, is a key strategy to strengthen Somali women’s political participation.

The UNSOM Gender Office, located within the Office of the Secretary-General’s Special Representative for Somalia, ensures critical policy advice and strategic guidance are available, internally, to improve policies across the Mission. The Office also strengthens gender mainstreaming externally by ensuring the provision of advice to national entities, particularly the Ministry of Women and Human Rights Development, Women Parliamentary Caucuses at the Federal Parliament, civil society actors, women leaders in Mogadishu and in the Federal Member States. The UNSOM Gender Office also has a network of Gender Focal Points and Gender Affairs Officers based in UNSOM offices in Mogadishu and across Somalia.

Being a political mission, UNSOM strives to be a champion in promoting Somali women’s participation in peace and political processes, in decision-making and in leadership roles. The Mission’s work in this regard ranges from advocacy on policy and legal provisions, to the inclusion and participation of women in policy fora, public debates, ad-hoc and specialized bodies, committees and commissions, and in peace/political dialogues and processes. It also includes promoting women’s participation and gender perspectives in the Constitutional Review Process, federalization processes, and promoting support for gender-inclusive elections.

However, despite weak legal and policy environments and institutional mechanisms, Somalia is catching up with the rest of the world in certain indicators for women’s political representation and participation, particularly at the federal level. The 10th Federal Parliament saw an impressive increase in women’s representation: from 14 per cent in 2012 to 24 per cent in 2016.

Achieving 24 per cent representation of women in the Somali Federal Parliament was a huge milestone in advancing women’s political representation and participation. Women’s participation in the 2016 electoral process was characterized by massive advocacy, mobilization and campaigning for 30 per cent of the seats being reserved for women; the establishment of a Committee of Goodwill Ambassadors to promote women’s reserved seats; as well as women’s 30 per cent representation in all electoral management structures, committees and processes, including Federal and State level indirect elections implementation teams and electoral colleges.

UNSOM was actively engaged in supporting national efforts for achieving the 30 per cent quota for women in parliamentary representation.

To support women’s representation and participation in the on-going 2022 federal indirect elections, the UN has devised a joint strategy and established a Gender and Elections Task Team (GETT), made up of various elements of the UN system in Somalia.

GETT is advocating for a minimum of 30 per cent representation of women in the process as well as in the results of the indirect elections. High-level advocacy, keeping the 30 per cent quota on the national leadership’s political agenda at the federal as well as Federal Member States (FMS) level, enabling women leaders to run advocacy campaigns, mobilizing financial resources to support women’s advocacy and providing visibility to women’s campaigns, concerns, challenges and achievements form the main pillars of the GETT strategy.

Spearheaded by the Political Affairs and Mediation Group (PAMG) and in partnership with the UN Development Programme (UNDP), UNSOM provides policy advice, technical guidance and strategic support to the Constitutional Review Process.

The UNSOM Gender Office, in close collaboration with PAMG, UNDP and UN Women, ensures that women are included as stakeholders in the process. In partnership with Sweden, UNSOM has supported women civil society leaders and organizations to establish a critical mass to lobby for the inclusion of gender provisions in the federal constitution. Women’s groups established a forum – the Somali Women’s Leadership Forum – to ensure their engagement and timely intervention to raise critical issues and provide inputs to the process. UNSOM will continue to support the process and ensure women, as agents and stakeholders, are represented in the process and are able to influence it.

Gender and Justice, Rule of Law and Security Sector Reform

The UNSOM Gender Office works hand-in-hand with the Rule of Law and Security Institutions Group (ROLSIG) to ensure the availability of gender technical advice and guidance in this field, and that Somali women are counted in security sector reform processes.

Increased participation and representation of women in formal institutions, the promotion of women’s voices through civil society engagement, and a systematic approach to gender mainstreaming in all rule of law and security institutions are among the priority advocacy areas.

Some notable contributions, achievements, and progress

The UNSOM Gender Office works closely with various components of the Mission and through the existing inter-agency coordination mechanisms, including the UN-Gender Theme Group (GTG), to promote and ensure the integration of gender and WPS in the Mission/UN policy provisions and mechanisms.

Some of the outcomes of such internal advocacy and advisory services and collaboration with UN agencies, funds, programmes and mechanisms, include:

The UNSOM Gender Office plays a lead role in coordinating, planning and supporting annual commemorative events relevant to the Mission mandate and the GTG, including the International Women’s Day, the 16-Days of Activism against Gender-Based Violence campaign, and the UN Global Open Day on Women, Peace and Security.

The International Women’s Day is observed annually on 8 March to celebrate women’s achievements and progress made by and for women and women’s rights across the globe. The Day is also commemorated to remind leaders, policy planners, and women themselves, of the unfinished tasks. It serves as a stock-taking of progress and gaps, and is an occasion to call for renewed commitments and increased investment in women’s rights and gender equality.

The 16 Days of Activism against Gender-Based Violence is an annual global campaign aimed at raising awareness on the need to end violence against women and girls. The campaign connects two vitally important dates for women’s rights and protection: the International Day for the Elimination of Violence against Women on 25 November, and the Human Rights Day on 10 December.

For both International women’s Day and 16 Days of Activism against GBV, UNSOM’s Gender Office coordinates internally with Mission-relevant components and at the inter-agency level in planning commemorative activities as well as extending financial support to government and civil society partners across Somalia.

The UN Global Open Day on Women, Peace and Security was established in October 2010 to commemorate the tenth anniversary of UN Security Council Resolution 1325 (SCR 1325), with the aim of reviewing its implementation.

The occasion provides an opportunity for women to highlight their experiences, challenges, contributions and efforts to promote peace and security in conflict and post-conflict settings. The celebrations also give women the opportunity to directly engage with leaders and policy planners and be actors for change, to take ownership, as well as to strengthen the implementation to SCR 1325 and subsequent resolutions.

In Somalia, the UNSOM Gender Office organizes and coordinates the Open Day celebration. Women leaders, civil society actors, women’s groups and organizations, women parliamentarians and ministers, and other strategic partners and stakeholders, are invited to the event, which involves discussions and dialogues with senior UN officials to reflect on women’s participation, protection and empowerment.