Prevention and Countering of Violent Extremism

After years of instability, Somalia is still in conflict, burdened by threats and attacks carried out by armed groups including violent extremism and terrorist groups. Somalia’s most infamous violent extremist group, Al-Shabaab, continues to control and influence territory and communities in large parts of the country, particularly in the south and central parts, despite territory gains made in recent years by the Somali National Army (SNA) and the African Union Mission in Somalia (AMISOM) in the implementation of the Somali Transition Plan. In the north, a small fraction of the Islamic State of Iraq and the Levant terrorist group – (ISIL or Daesh) has taken ground.

Particularly in an environment of volatile politics and localized security vacuums, violent extremism and non-state armed groups have space to thrive and can fill the void left behind by fragile and untrusted institutions, the absence of a functioning state and still very unequal society. Violent extremist groups continue to influence communities via complex gendered narratives and clan influenced tactics, reinforced by propaganda, indoctrination via radical curricula for young children, “justice” provision and a particular administration, including an elaborate taxation system.

Until today, conditions conducive to terrorism and violent extremism are a reality in urban areas as well as communities in newly recovered areas, where – without efforts for local reconciliation and political inclusion, employment opportunities, particularly for young people, and rebuilding the trust between the people and the state – groups like Al-Shabaab have the tactical potential to retake territory and strengthen credibility as provider of social services.

In January 2016, the UN Secretary-General launched the Plan of Action to Prevent Violent Extremism, which emphasizes how violent extremism undermines peace and security, human rights and sustainable development. The Plan acknowledges that violent extremism does not arise in a vacuum, and how narratives of grievance, actual or perceived injustice, promised empowerment and sweeping change become attractive perspectives where good governance is being ignored and aspirations are being crushed.

To address that broad spectrum of factors, the Plan is based on seven priority areas: 1) dialogue and conflict prevention; 2) good governance, Rule of Law and human rights; 3) engaging communities; 4) empowering youth; 5) gender equality and empowering women; 6) education, skills development and employment facilitation; and 7) strategic communications, the Internet and social media.

The Plan for Action recommends greater coordination and integration of efforts to prevent violent extremism into activities of UN peacekeeping operations, special political missions and United Nations Country Teams, wherever relevant and in accordance with their respective mandates.

It is precisely here where the United Nation’s approach to Prevention and Countering of Violent Extremism (P/CVE) plays a critical role in building capacity to support the coordination, prioritisation, sequencing, and regular review of Somalia’s efforts at the higher governmental level-upstream. Additionally, it links up with downstream efforts – reaching out to local communities and civil society to bring them in as partners for continued analysis, advocacy, and joint implementation, additional to monitoring and evaluating progress.

In September 2016, the Federal Government of Somalia took initial steps to implement its obligations under United Nations Security Council and General Assembly Resolutions by adopting a National Strategy and Action Plan on Prevention and Countering of Violent Extremism.

Somalia requested further support and assistance of the United Nations in Somalia to fully implement its obligations pursuant to relevant UN Resolutions on Countering Terrorism and Prevention and Countering of Violent Extremism, including Security Council Resolution 1373 (2001), 1624 (2005), 2178 (2014) and the Secretary-General’s Plan of Action.

Ever since Security Council Resolution 2358 (2017), UNSOM has a mandate to advise and assist Somalia in the implementation of the National Strategy and Action Plan to Prevent and Counter Violent Extremism. This mandate includes the support to coordinate PCVE activities, advise on specific thematic issues, share good practices and enable information exchange with other partners.

In 2017, in the broader security context, the Government of Somalia, the United Nations, international partners and AMISOM have endorsed the Comprehensive Approach to Security (CAS) integrating PCVE with military and law enforcement efforts, aiming to enable Somali authorities at the federal and state levels to provide security for their own citizens.

Under strand 4, Somalia and its partners take efforts towards an end state where conflicts are addressed politically as opposed to through violence. The strand is divided into two components:

There is no agreed international definition of violent extremism itself or what its prevention entails. The concept of “Prevention of Violent Extremism” is to limit the traction of terrorist groups on individuals, communities and society at large. Solid analysis and evidence-based assessment of specific, settings-based factors that lead to affiliation with violent organizations is needed. This requires a bottom-up approach to identify root causes, push and pull factors, recruitment strategies and drivers of violent extremism. It is crucial to link those efforts up with a top-down approach that addresses progress required and led by the Government on the policy and programmatic level to enable national and sub-national authorities and international actors to effectively take on root causes and drivers of violent extremism.

Somali federal and state authorities have identified P/CVE coordinators and focal points in the relevant line ministries, which form the basis of a mechanism that allow for top down and bottom-up communication flow and implementation scheme contributing to relevant intervention and confidence building. In addition, this provide for evidence base research and actions that if relevant and efficient can then be integrated into policies.  Eventually the support to the Somali efforts by the international community is coordinated by the PCVE Coordination Unit in the Prime Minister Office through the CAS strand 4. 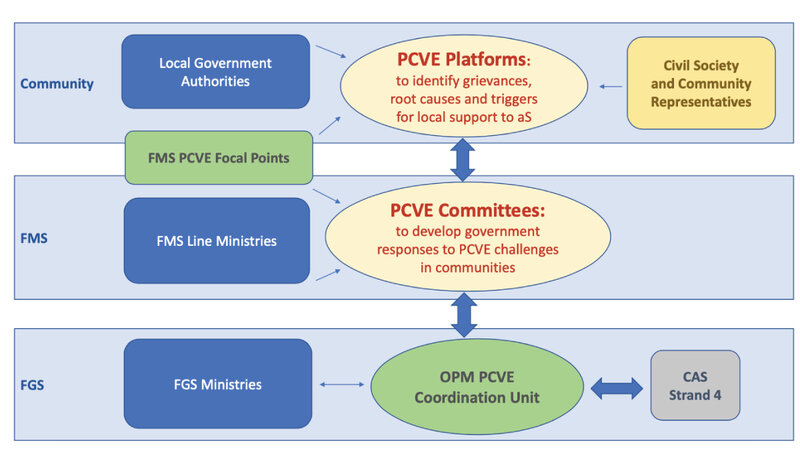 The UN in Somalia collectively, as well as the International Community are supporting the implementation of the National PCVE strategy through targeted and relevant interventions align with the National Development Plan (NDP) 9, such as programs promoting inclusive politics (including Women Peace and Security, Youth Peace and Security agenda), the Rule of law – security and justice, non-violent alternative, reintegration and rehabilitation of former Al Shabab fighters, deradicalization risk reduction intervention in prisons, security sector good governance, Islam as a religion of peace and tolerance, community resilience, civic education and national identity, economic empowerment and employability as well as counter-narrative through strategic communications including in the framework of the COVID 19 pandemic.

The joint PCVE UN Program has supported the institutionalization of the PCVE coordination mechanism as well as the implementation of the National Strategy. The second generation of PCVE joint program will support the revision of the National Strategy towards Tolerance and Dialogue. Efforts will increasingly focus on promoting dialogue as a valued tool for coexistence and social accepted means to address differences of opinions; encouraging non-violent alternatives of conflict resolution; cultivating common ground between conflict parties to create condition conducive to peace; and addressing intolerance of a deeply hierarchical, clan-based, patriarchal Somali society, leading to social, economic and political exclusion, discrimination of minority clans, and of minority sub-clans within the dominant clans.