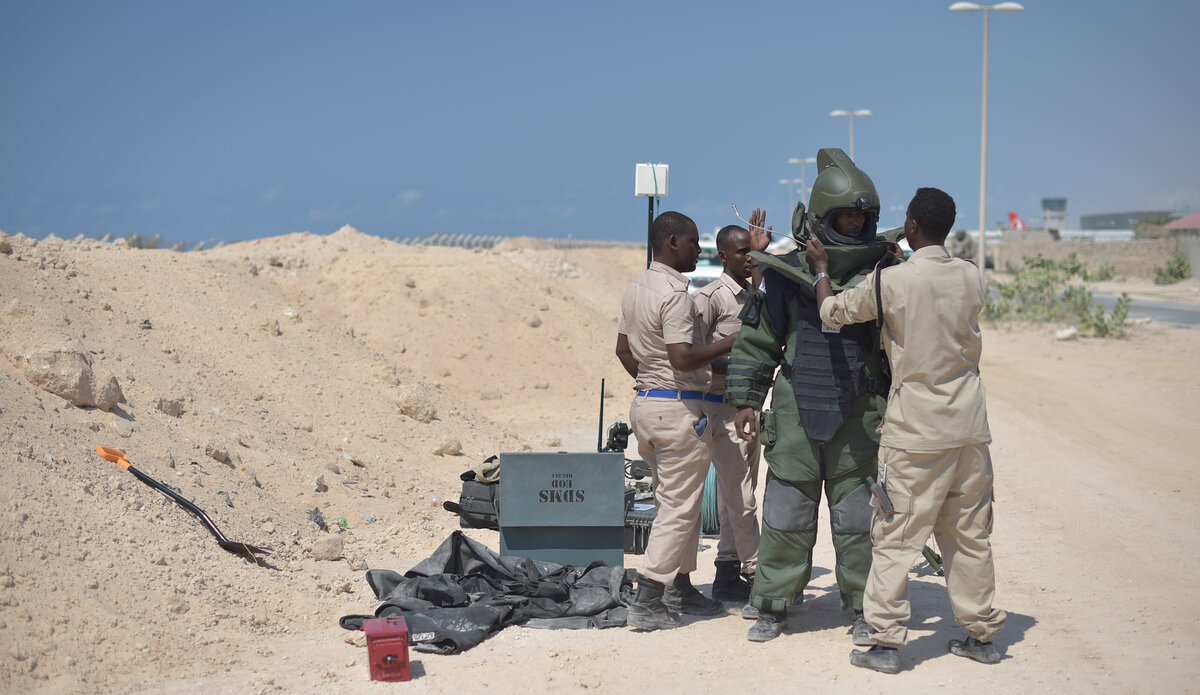 Established in 1997, the United Nations Mine Action Service (UNMAS) works to eliminate the threat posed by mines, explosive remnants of war and improvised explosive devices by coordinating United Nations mine action, leading operational responses at the country level, and in support of peace operations, as well as through the development of standards, policies and norms. As a specialized service of the United Nations located within the Department of Peace Operations, UNMAS operates under UN legislative mandates of both the General Assembly and the Security Council. UNMAS also responds to specific requests for support from the UN Secretary-General or designated officials.

In Somalia, UNMAS ensures that people are safer and more secure due to the increased ability of Somali national authorities and security services to reduce the threat posed by explosive ordnance (EO), including improvised explosive devices (IEDs).

Over the past years, IEDs have been the weapon of choice of armed groups, used against Somali Security Forces (SSF) and the African Union Transition Mission in Somalia (ATMIS). However, while the SSF and ATMIS continue to be the most frequently targeted by IEDs, the IED threat disproportionately impacts civilians who made up 42% of all IED related casualties in 2021. Additionally, decades of armed conflict left behind a legacy of explosive ordnance, including landmines and explosive remnants of war, as well as a proliferation of small arms and light weapons. Both pose a significant risk to local populations and have a detrimental impact on peacebuilding and statebuilding activities.

UNMAS is an integrated component of UNSOM, within the Rule of Law and Security Institutions Group (ROLSIG), and of UNSOS providing IED threat mitigation initiatives critical to the successful transition of security responsibilities from ATMIS to the SSF. UNMAS provides policy and technical advice to the Federal Government of Somalia (FGS) and the Federal Member States on explosive ordnance threat reduction, Weapons and Ammunition Management (WAM), and obligations under Article 5 of the Mine Ban Convention, pursuant to the UNSOM mandate. UNMAS also oversees operational explosive ordnance threat mitigation support to ATMIS and the SSF under the UNSOS mandate, which supports the implementation of the Somalia Transition Plan and ensures the freedom of movement and resilience of ATMIS and SSF, the safety and security of critical infrastructure such as airports and major routes, UN personnel and assets, and the local populations.