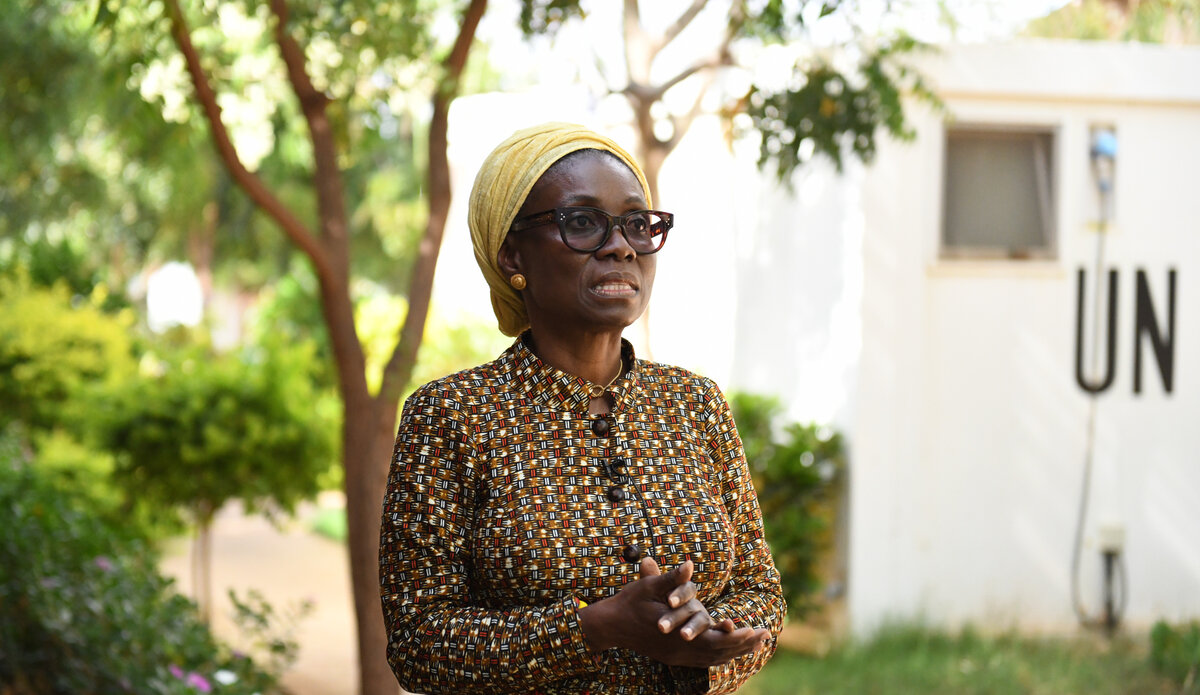 Since its establishment on 3 June 2013, UNSOM has engaged the Federal Government of Somalia (FGS), the Federal Parliament, the Federal Member States as well as traditional leaders, civil society organizations and women’s groups on the processes related to Somalia’s peacebuilding and state-building objectives.

Under the Somali New Deal Compact, the Federal Government of Somalia identified five peacebuilding and state-building goals (PSGs). The focus of the UNSOM Political Affairs and Mediation Group (PAMG) is on PSG 1 (inclusive politics). The strategic objective of PSG 1 is to achieve a peaceful and stable federal Somalia through inclusive political processes.

The priorities of PSG 1

To support these priorities, PAMG activities include:

During the first eight years of UNSOM’s mandate, Somalia has made significant progress on the political process, with the formation and initial consolidation of five Federal Member States in the regions of South and Central Somalia. The Special Representatives of the UN Secretary-General for Somalia undertook wide-ranging consultations with local, regional and international stakeholders to build and consolidate the necessary relationships and to strengthen the partnership between the United Nations and the African Union, reflected on the ground in the working relationship between UNSOM and the African Union Mission in Somalia (AMISOM).

The current Special Representative of the UN Secretary-General, James Swan, has been leading UNSOM since 30 May 2019. This critical period has included the support for a peaceful political transition at the end of the constitutionally mandated terms of the legislature and the executive and the finalisation of outstanding foundational elements for Somalia’s state-building undertaking, including the completion of the constitutional review and electoral law.

Limited institutional capacity remains a challenge in both federal and sub-federal levels of government. The need remains to support the emergence of a coherent federal system and political process across the entire range of engagement. Long-standing grievances and an evident need for repeated reconciliation are issues to be addressed to ensure that state-building is rooted in a bottom-up exercise of societal reconciliation, convergence and inclusion, ultimately to be reflected in a country-wide social contract that finds expression in a revised constitution.

In all these endeavours, PAMG provides strategic policy advice and coordination and works closely with national, regional and international partners, fulfilling its mandated role of monitoring, analysing and reporting on political developments within Somalia and its region, that have implications for peacebuilding and state-building.

The protracted political stalemate centring on disagreement over the electoral process has adversely affected the stability of Somalia. Collectively, the United Nations has played and continues to play an important role in politically and technically supporting the Federal Government and Federal Member States in dialogue to reach an agreement on the electoral mode and promote an electoral process to facilitate a political transition at the end of the constitutionally mandated term limits of the legislature and the executive in 2020.

UNSOM, working in close cooperation with international partners, assisted the Federal Government of Somalia and the Federal Member State leaderships to restore functioning cooperation between the levels of government and to reach a consensus-based model for the conduct of national elections. This dialogue resulted in the electoral agreement of 17 September 2020. The mission has intensified the coordinated efforts to assist the Federal Government and Federal Member State leaderships to overcome the protracted political stalemate regarding the implementation of the 17 September 2020 Agreement.

PAMG supports the mission leadership to provide good offices support to rebuild trust among the political principals and promote dialogue rather than confrontation and to pursue the path of compromise and cooperation to seek solutions to issues of disagreement. PAMG has assisted the technical committee comprised of representatives from the Federal Government and Federal Members States that developed proposals to resolve the three contentious issues related to the implementation of the 17 September electoral agreement, namely the composition of the federal electoral management bodies, the mechanism for selection of the Somaliland representatives and the management of elections in the Gedo region of Jubaland State. International partners, including UNSOM, provided technical support for the summit between the Federal Government of Somalia and Federal Member States, held in March and again in May 2021, with the objective of endorsing the 17 September agreement and to deliver indirect elections without further delay.

Despite the delay in electoral implementation, the United Nations has continued to assess the plans and operational requirements of the Federal Elections Implementation Team and the Electoral Dispute Resolution Committee. This assessment aims to ensure coherence between current electoral planning and the electoral budget developed in January 2021. PAMG works closely with the Integrated Electoral Support Group (IESG) — a joint team comprising UNSOM and UNDP expertise — in this respect.

An underlying driver of political instability in Somalia is the absence of an agreed Federal Constitution which would define the nature of state and assign and define authorities, competencies and shared resource management among the different levels of government. Somalia currently operates under the 2012 Provisional Federal Constitution, which all parties accept to be an imperfect legal framework.

UNSOM and UNDP jointly engage the Federal Parliament of Somalia, the Ministry of Constitutional Affairs (MOCA), and the Independent Constitutional Review and Implementation Commission (ICRIC) to promote and guide constitutional reform. This support involves daily contact with these institutions as well as financial, logistical and advisory assistance to implement specific events and processes. As example, at the request of the Prime Minister and the Speaker of the Federal Parliament, UNSOM and UNDP organized visits by leading international constitutional experts to Mogadishu, to assist with assessment and to provide the government and the parliament with an informed but impartial overview of the current contentious issues in the Provisional Constitution, and recommendation options for corrective measures.

The UNSOM constitutional team continues to work closely with Somali stakeholders in advancing the constitutional review. By the summer of 2021 convergence on a number of technical issues had emerged between the Federal Government and the Federal Member States of Hirshabelle, Southwest and Galmudug. UNSOM’s efforts focus upon support for the reactivation of the review process after the national elections and encouragement to the parties to reach agreement on outstanding technical and political issues of contention.

PAMG maintains close contact with the Federal Parliament and has a dedicated Parliament Liaison Officer whose responsibility includes supporting the legislative processes pertaining to inclusive politics, mainly on state formation and state-building, constitutional review and elections as well as liaising between members of the Parliament and UNSOM on parliamentary related matters.

Under the joint program, “Reconciliation and Federalism Support (REFS)”, the UN supports the Federal Government of Somalia and the Federal Member States to implement their chosen method of state administration and federalism process through needs-based political settlement, boundary delimitation and mutually supporting reconciliation processes. These support systems and processes are aimed to consolidate state-formation efforts towards building and harmonizing the emerging federal system in the country and its federal and state institutions, ensuring alignment with the objectives of the NDP 9. Most importantly, the UN initiatives are aimed to support the different levels of government to establish the requisite administrative machinery to improve service delivery to the Somali people.

The UN is facilitating the involved line ministries and departments of both Federal and Federal Member State governments, civil society and thinktanks to develop and operationalise appropriate programmatic interventions, institutional and regulatory mechanisms, technical tools and executive instruments to effectively translate the political/policy decisions/directions on federalism and reconciliation into demonstrable and functional governance framework(s), regulations and procedures.

The UN project supporting the implementation of the National Reconciliation Framework (NRF) and National Reconciliation Plan (NRP) has contributed to expanding outreach of the NRP to the grassroots level by mobilising, engaging and facilitating the active participation of Federal Member States and Banadir Regional Administration (BRA), resulting in a broadened ownership of the NRF/NRP.

Conflict mapping and regional reconciliation planning has provided training and technical assistance on conflict mapping methodology (explaining the background, process and mechanism of conflict-related data collections) is helping to produce and update baseline data to inform/update the formulation and implementation of Regional Reconciliation Plans at the Federal Member State level. The project has strengthened community-based reconciliation mechanisms and peacebuilding initiatives by providing strategic, technical and operational support to our counterparts to achieve reconciliation and peace agreements in a number of inter-clan and intra-clan conflicts in Galmudug, Puntland and Jubaland States.

The Project’s technical support to the Independent Commission for Boundaries and Federalism (ICBF) has resulted in : (a) finalization of the Formalization Report2 (English and Somali versions), (b) finalizing delimitation of the administrative boundary between Southwest and Hirshabelle; (c) commencement of the boundary consultation between Galmudug and Puntland that should contribute to peacebuilding and stability in the Mudug region (including Galkacyo Town); and (d) boundary consultations between Hirshabelle and Galmudug states. The institutional capacity of counterparts was enhanced through the project interventions and activities by embedding diverse and specialised technical, assistance with the eight Federal Government and Federal Member State counterparts.

The relationship between the authorities of Somalia and those of the self-declared independent entity of “Somaliland” remains an important area of focus. The latter continue to maintain that “Somaliland” is sovereign and rejects the emerging federation. Against this background, UNSOM engages in contacts with all relevant sides to foster dialogue and a spirit of continued communication and cooperation towards a negotiated relationship between the administrations.

Civil society organisations in Somalia continue to play a crucial role since the civil war. That role has encompassed assisting in outreach programmes at the grass-root level, fostering confidence in the peace processes and promoting good governance and greater accountability to facilitate the task of building peace and democratic institutions.

UNSOM PAMG works with a range of Somali civil society organisations to ensure their participation in the peacebuilding and state-building processes. In this regard, PAMG has maintained a “Somali Opinion Leadership Forum” since October 2014 as a platform for Somali intellectuals, academics, religious leaders, clan elders, business leaders, unions, students, women and youth to meet on a regular basis to discuss issues and concerns, exchange ideas on political, reconciliation, economic and other priorities are important building blocks in the promotion and maintenance of peace in the country, based on inclusive process and representative outcomes.

PAMG’s commitment is to mobilise civil society organisations as partners whose voices and views on issues affecting the country will be heard by Somali and international policy makers. PAMG works with and supports civil society organisations through the provision of advice, regular consultations and collaboration on outreach programmes, communications, civic education, reconciliation, mediation efforts, information-sharing, and capacity-building.