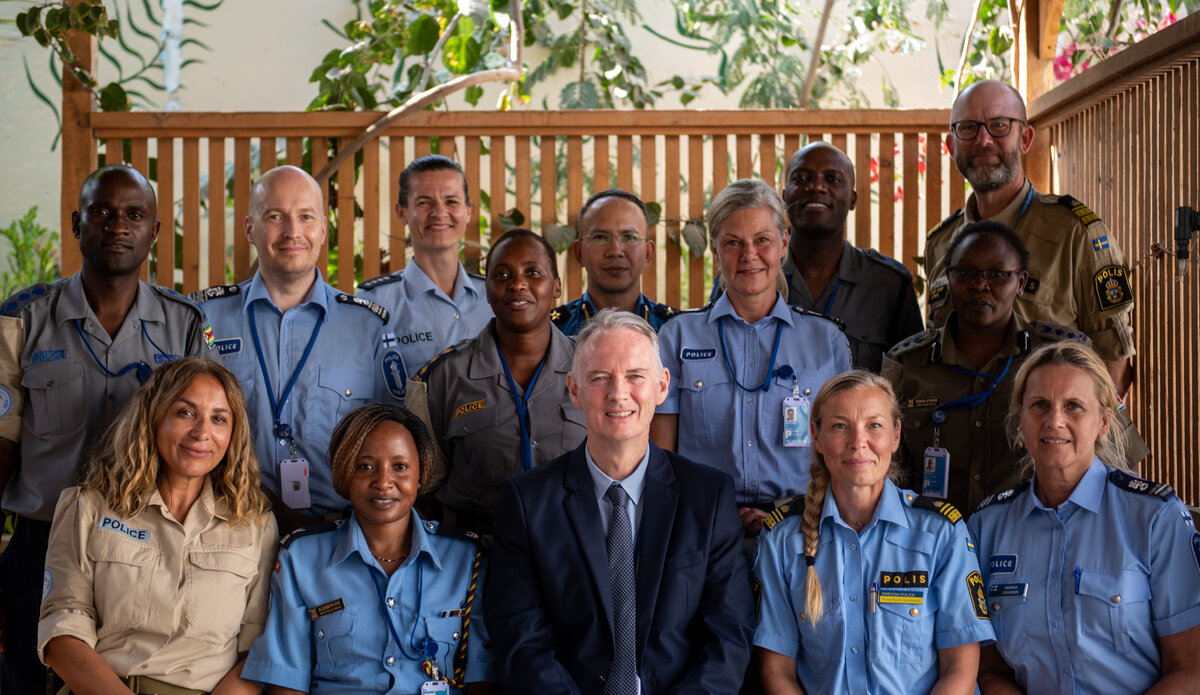 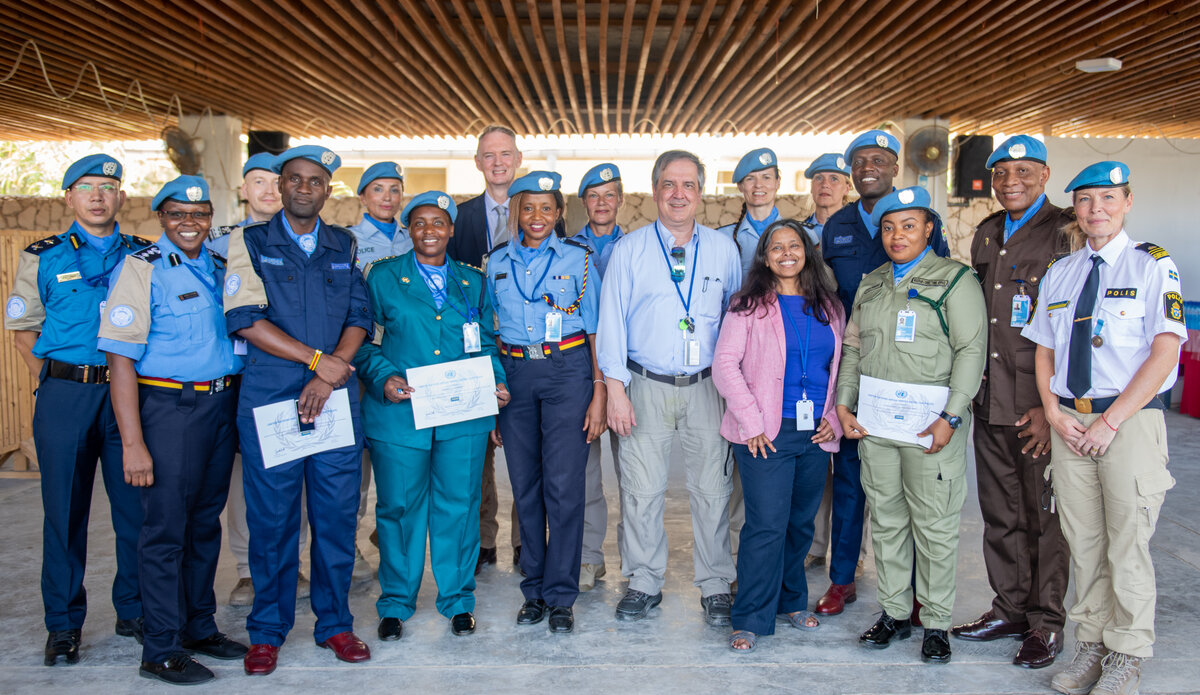 The UNSOM Police Section is a component of UNSOM’s Rule of Law and Security Institutions Group (ROLSIG). UNSOM Police is mandated to provide strategic policy advice to the Somali Government at the federal and state levels to uphold the rule of law and establish and strengthen capable, accountable, and rights-based federal police services. Among its other mandated functions, UNSOM Police is supporting the Federal Government’s to implement the federated policing system, to promote respect for human rights and women’s empowerment, promote child protection, and prevent conflict-related sexual and gender-based violence (SGBV). 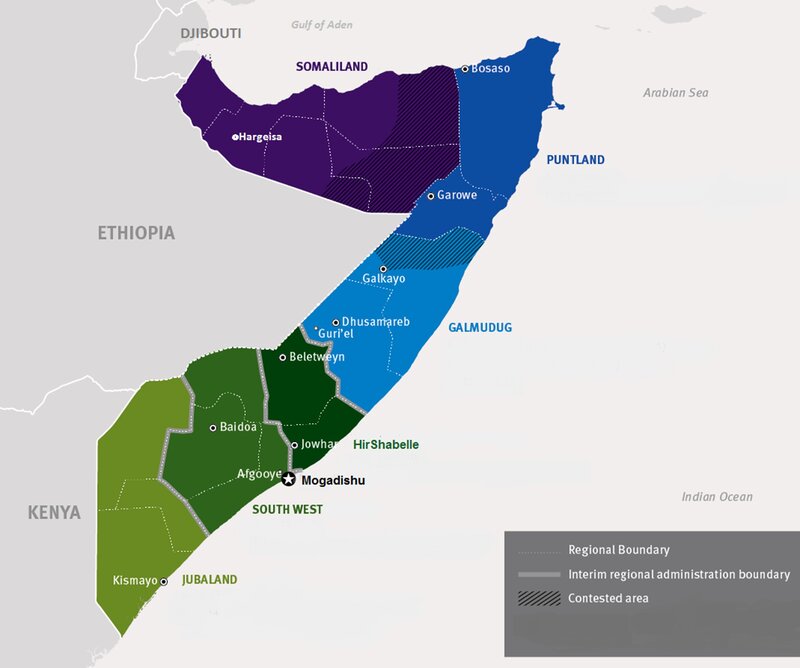 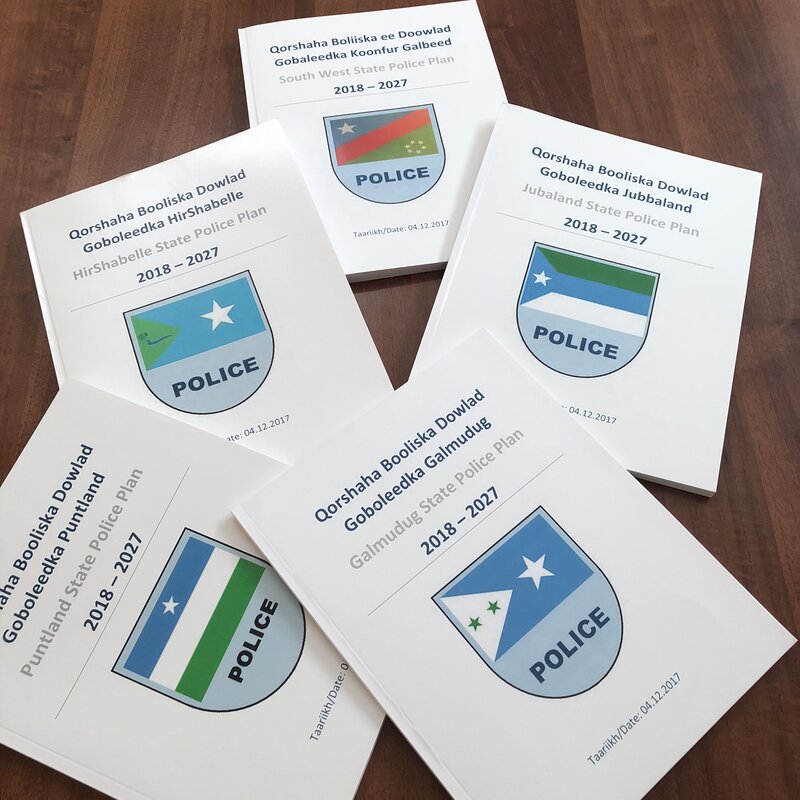 UNSOM Police support the Federal Government of Somalia (FGS) and the Federal Member States (FMS) in implementing the New Policing Model based on the political agreement at the 2016 National Leadership Forum. The agreement was reinforced by its inclusion in the National Security Architecture in 2017 and endorsed by the Security Pact at the London Conference on Somalia in 2017. The New Policing Model provides the framework for a federal system of policing at the federal and state levels.

Technical Committees which oversee the implementation of the New Policing Model are operating in Galmudug, Hirshabelle, Jubaland, Puntland, and South West State. The Technical Committees include representatives from the respective ministry responsible for policing, its State Police Command, and other relevant representatives to the specific jurisdictions. The Committees developed State Police Plans endorsed by the National Security Council on 3 December 2017. Prioritised projects emerging from these plans are presented to the Joint Police Programme for consideration.

Support for the Joint Police Programme 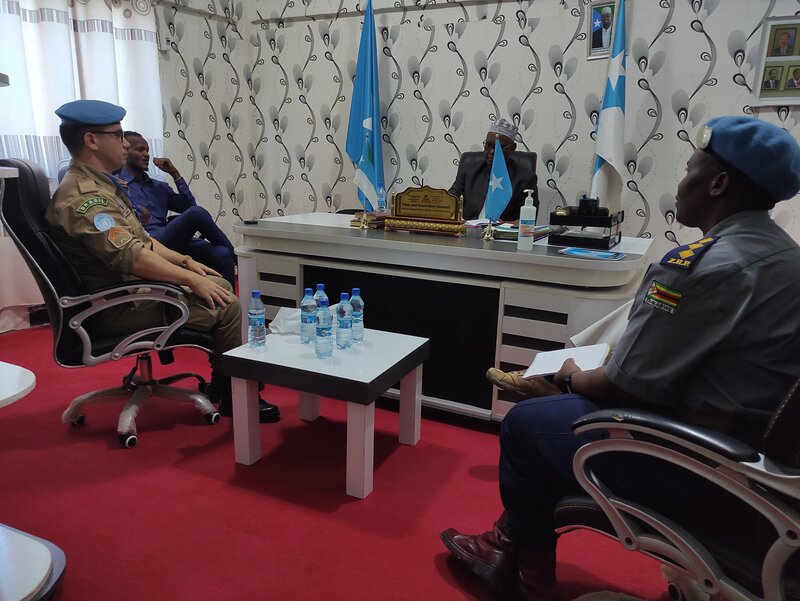 The Joint Policing Programme (JPP) Phase 1 is a $54m programme that operates from 2018 to 2023 and supports the Federal and FMS Police in implementing the country’s two-tier federated New Policing Model (NPM). The JPP enables the efficient and effective allocation of resources and fosters stronger strategic partnerships between Somali and international actors by bringing donor funding from Germany, European Union and the United Kingdom for the police into one programme. UNSOM Police advise the JPP’s Executive Board on issues relevant to the implementation of the New Policing Model through the JPP’s programmatic support including non-lethal support equipment and infrastructure; police stipend payments; police training; legal framework development; civilian oversight and governance of policing; and Darwish police. 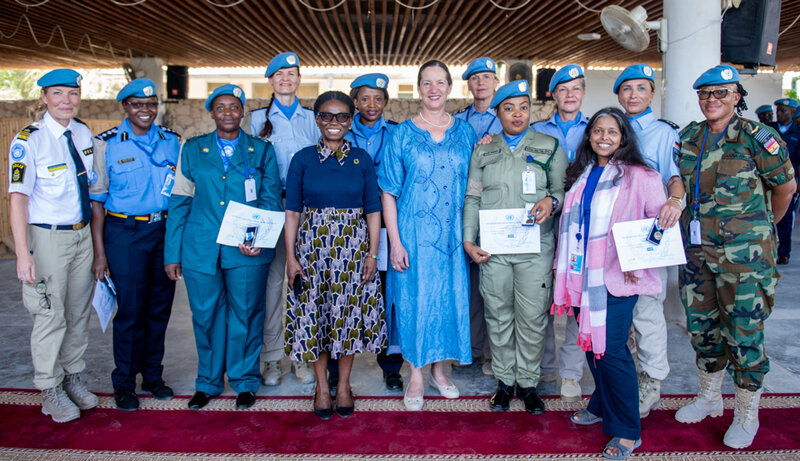 UNSOM Police cooperate with UNSOM’s women and child protection unit, the UN Country Team, and the Somali Police to provide a coordinated multi-sectoral approach to prevent and investigate sexual and gender-based violence and conflict-related sexual violence and violence against children. This cooperation aims to enhance and improve the protection and support of women and children. Measures like awareness raising and supporting women to be recruited in the Somali Police continue. UNSOM Police, with other UN entities, ATMIS, Sweden and the United Kingdom, also supported the establishment of Women Situation Desks in eleven locations in Somalia.

Cooperation with ATMIS and EUCAP 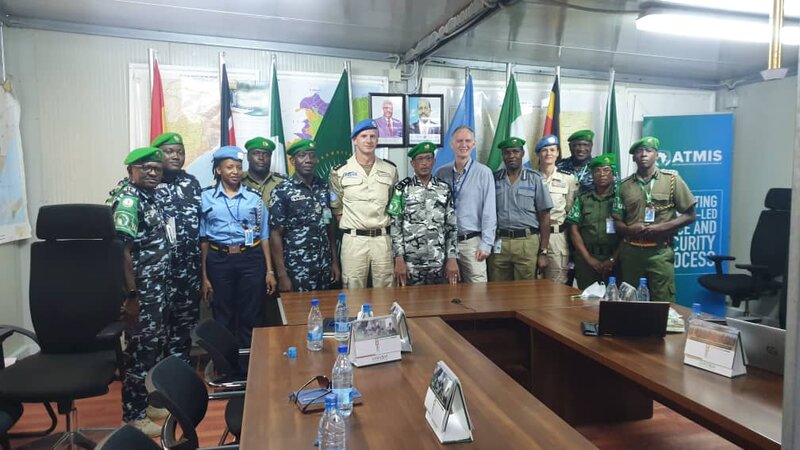 UNSOM Police are working with the African Union Transition Mission in Somalia (ATMIS) and the EU Capacity Building Mission in Somalia (EUCAP) police component to provide coordinated support to the Somali Police.  UNSOM Police has an appointed adviser to liaise with ATMIS and EUCAP to align policing initiatives. UNSOM Police are also collocated within the ATMIS Police in Mogadishu to strengthen the police cooperation and support between ATMIS and UNSOM.  The coordination at the headquarters level is mirrored in Kismayo, Baidoa, and Beletweyne, where both organisations deploy international police advisers. 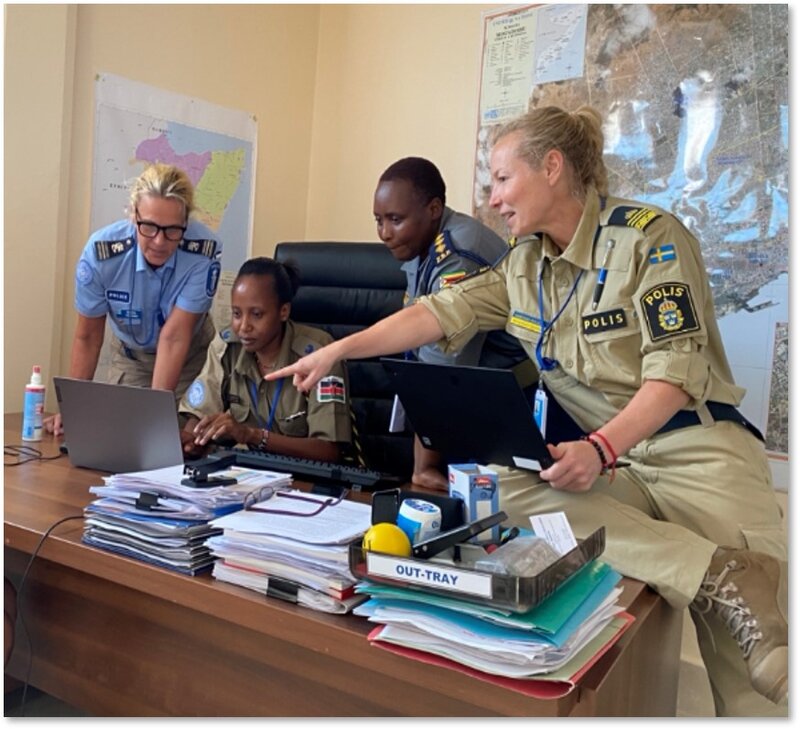 The Sub-Working Group on Police (SWGP) under the security coordination mechanism known as the Comprehensive Approach to Security (CAS) Strand 2B is a strategic coordination platform involving the Somali Police Services and the international community. UNSOM Police are the secretariat for the SWGP and support the co-chairs from the Federal Ministry of Internal Security and the German Embassy. 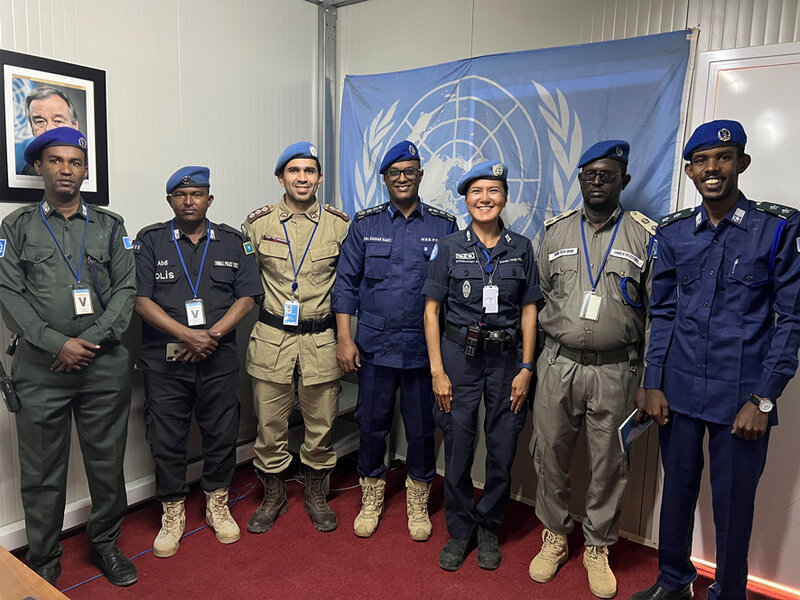 The Somali Police and its international partners coordinate police training and professional development-related activities through the Police Professional Development Board (PPDB). The PPDB is co-chaired by the Somali Police Force Planning and Training Directorate and UNSOM Police. Members of the PPDB include the Somali Police (federal and state levels), representatives from international organisations and bilateral partners.  The Somalia Police Training Strategy development is underway with support from the UNSOM Police and UNDP with funding from the Joint Police Programme.

The United Nations promotes gender-sensitive policing by recognising different security needs for women, men, girls, and boys. UNSOM Police advocates for increased numbers of female police in recognition that female police officers contribute to a greater sense of security for women and children and play an essential role in a more diverse policing institution. 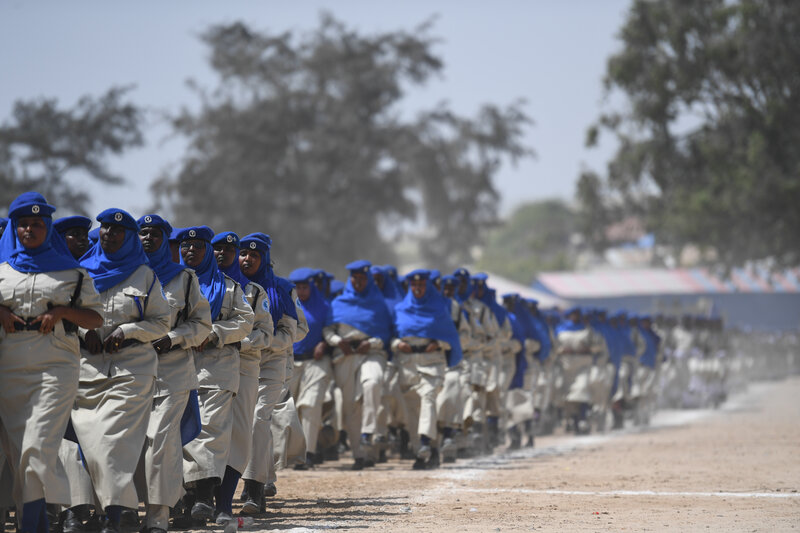 UNSOM is mandated to help build the capacity of the Federal Government of Somalia to promote respect for human rights and empowerment and to prevent conflict-related gender-based violence, including through the provision of Gender Advisors. The section reached an all-time high of 64% of IPO female representation in 2022.

UN police regularly has a number of police adviser vacancies available that Member States can nominate serving police officers for.  Serving police officers can access the following link to familiarise themselves with current vacancies and the requirements for Member States to nominate their staff for consideration https://police.un.org/en/vacancies 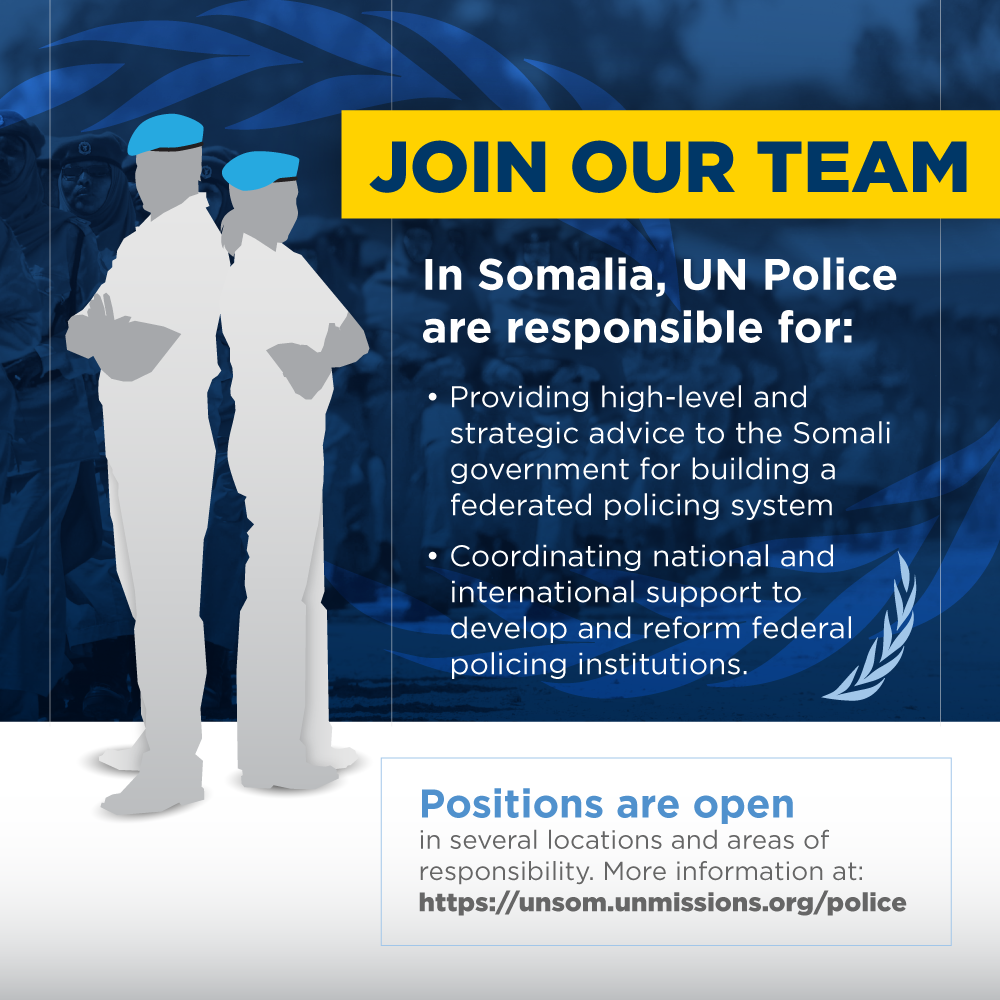 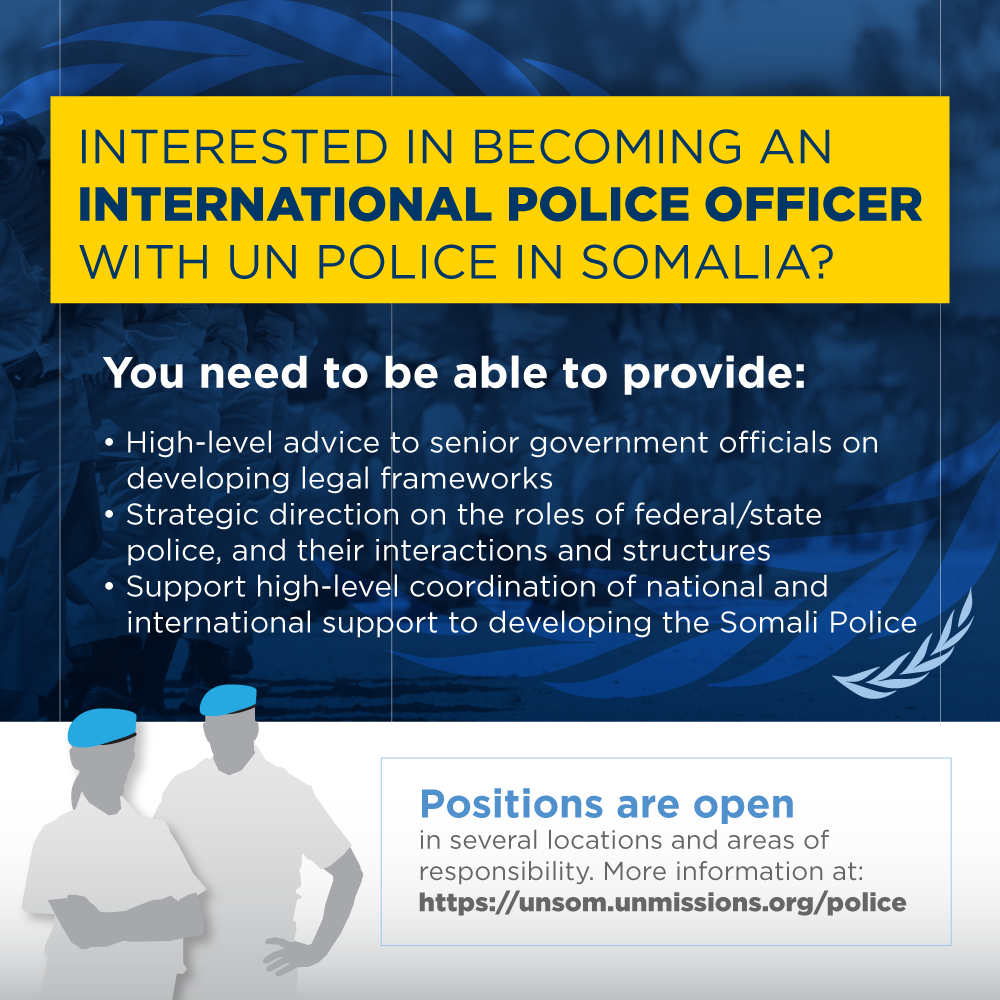 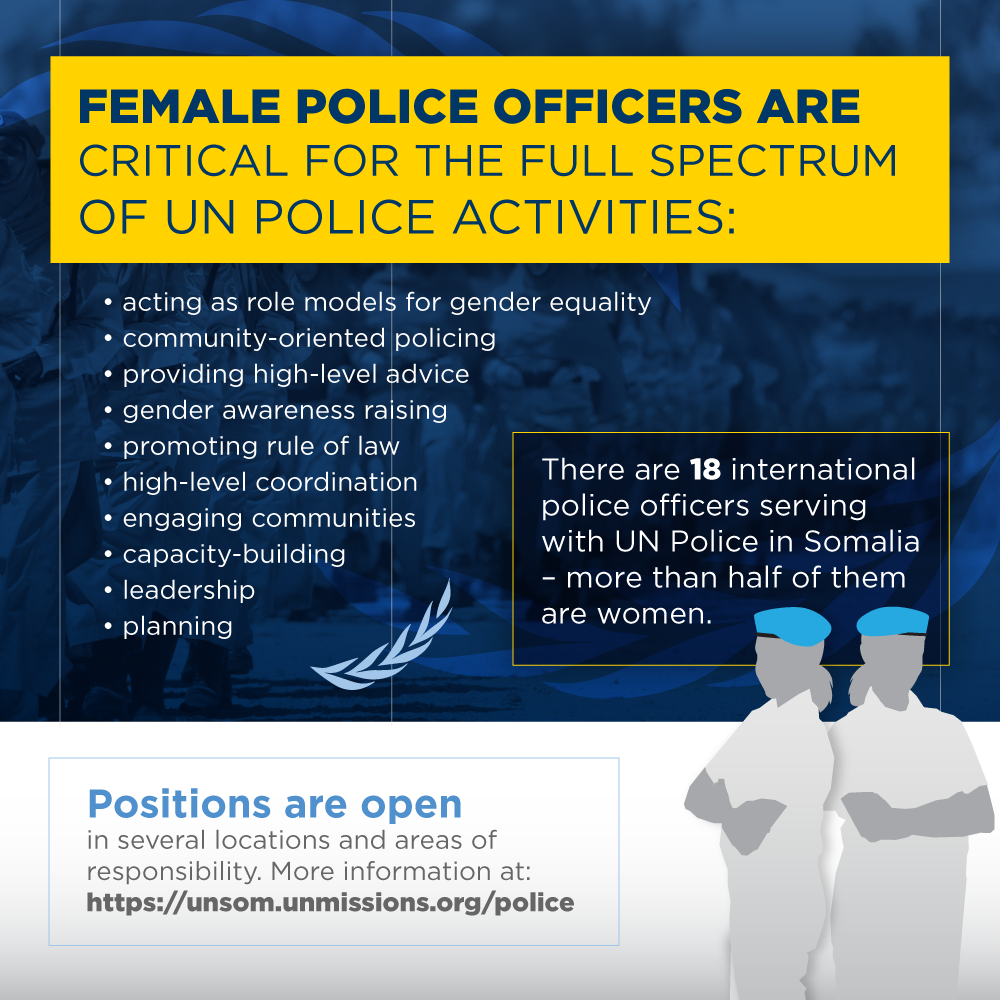