Galmudug – Welcoming the role played by the President of Galmudug in helping Somalia set on a path towards elections, representatives from some of the country’s key partners today called for more of the recent collaboration among its leaders which led to a national elections agreement.

“I would like to commend, on behalf of our group, President Ahmed Abdi Kariye for his leadership in hosting the series of meetings in Dhusamareb in July and August leading to the consultative meetings in Mogadishu last month during which the agreement on the elections model was reached,” said the United Nations Secretary-General’s Special Representative for Somalia, James Swan.

“We urge all of Somalia’s leaders to continue to collaborate in this manner with the preparations for the national elections so that they are underpinned by transparency, fairness and inclusivity,” he added, during a joint press conference with President Kariye following a meeting with him and representatives from international partners in Galmudug’s capital, Dhusamareb.

The UN envoy was speaking on behalf of the world body, and the Special Representative of the Chairperson of the African Union (AU) Commission, Ambassador Francisco Madeira; the European Union’s (EU) Deputy Head of Delegation to Somalia, Nicole Miller; and, from the Intergovernmental Authority on Development (IGAD), the Head of Mission, Jamal Ahmed Ibrahim.

The visit to the Federal Member State was the second this month for officials from the four international organizations, following a visit to South West State almost two weeks ago.

Despite the limited in-person engagement during recent months because of the response to the COVID-19 pandemic, the international partners have remained in close communication with President Kariye and the Galmudug administration via virtual meetings. They also met with the Galmudug leader in the country’s capital, Mogadishu, last month. 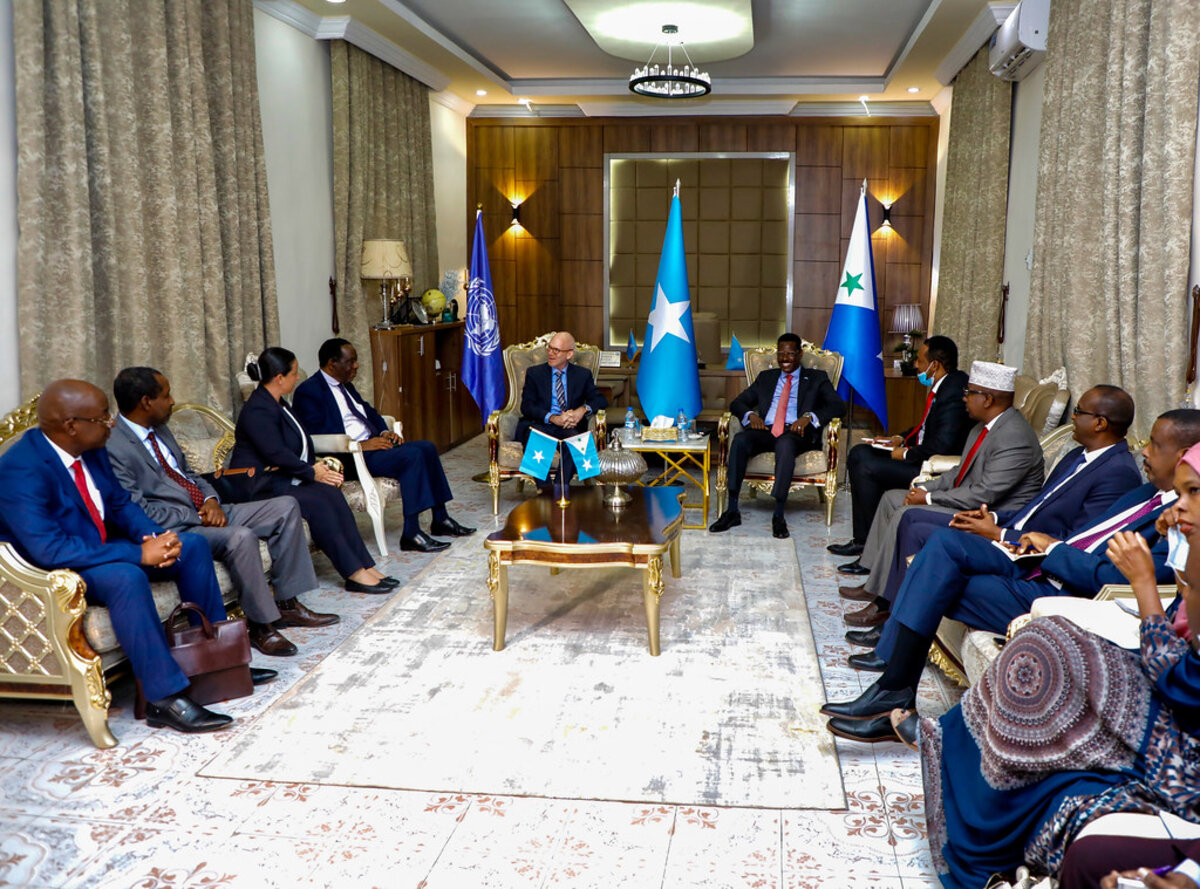 Echoing the international partners’ message from South West State earlier this month, the UN Special Representative said that in their meeting today with President Kariye they discussed the importance of continuing good relations between the Federal Government of Somalia and the country’s Federal Member States, noting that they had been encouraged by the revitalization of the dialogue between the two.

In his remarks to the media, Mr. Swan also highlighted key aspects of preparing for the country’s elections, including, among them, the need for “ensuring that the 30 per cent quota for women’s representation in the parliamentary elections is achieved and that the delegate selection committees include diverse representation.”

The AU, EU, IGAD and UN officials also commended President Kariye for his efforts at reconciliation and urged that this continue.

“We also registered our concern over recent security incidents, as Al-Shabaab has threatened the population,” Mr. Swan added.

In addition, the international representatives welcomed the presence of peacekeeping forces from the African Union Mission in Somalia (AMISOM) forces to support local Somali security forces in their efforts to maintain peace and security, and noted that partners are also working with the Galmudug Administration to advance programmes for the police as part of a broader security sector strategy.