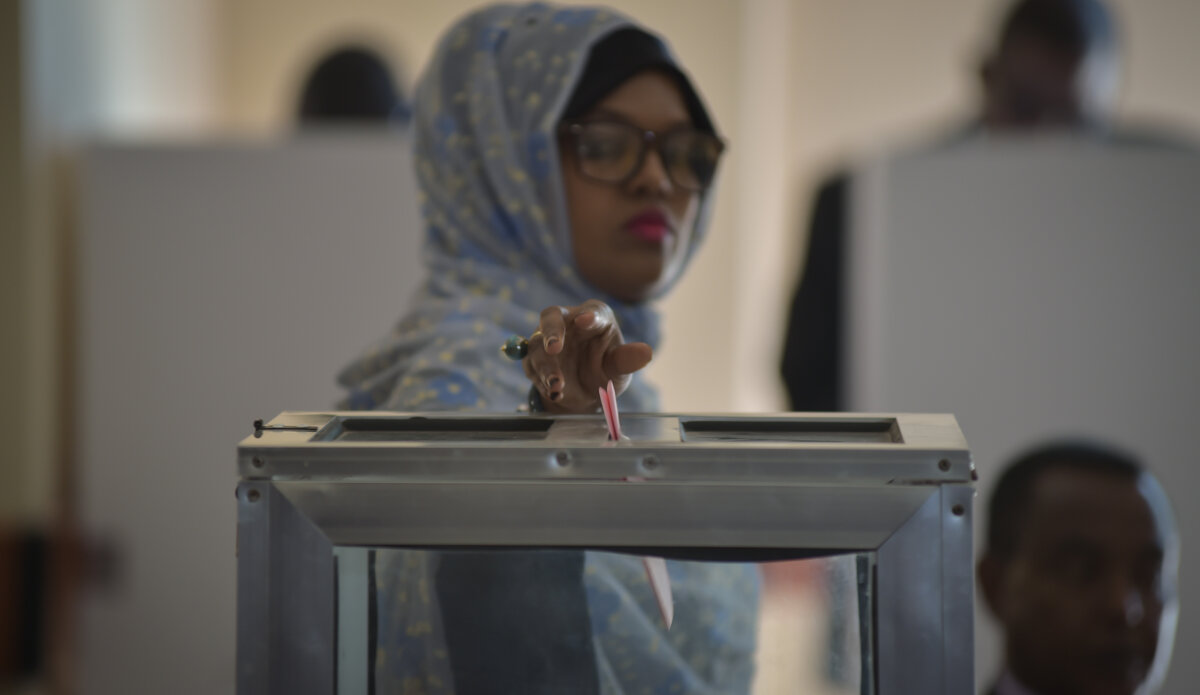 UNSOM is mandated by the UN Security Council to support federal elections.

In its Resolution 2540 of 28 August 2020, the Council mandated the UN to “provide support, through the exercise of its good offices and through technical, operational and logistical assistance to the FGS, the Somali Parliament, the NIEC, and any other stakeholders with an agreed role in election delivery, in collaboration with UNSOS, for the delivery of elections which are free, fair, timely, peaceful, transparent, credible and inclusive …..in accordance with the Provisional Federal Constitution of Somalia, and taking fully into account the perspectives of relevant stakeholders…..continue to support efforts to make progress towards the objective of universal elections, and support strengthened coordination of international electoral support to Somalia.”

UNSOM has supported Somalia to prepare for universal suffrage ('one-person, one-vote') parliamentary elections, in accordance with the Federal Government’s political roadmap for inclusive politics, which states that these elections should be held in the last quarter of 2020. IESG is assisting the NIEC, which is constitutionally mandated to organize federal elections, to develop options for organizing one-person, one-vote elections, following adoption of the Electoral Law in 2020 and the recommendations of an ad-hoc parliamentary committee for addressing key gaps in the law. Political stakeholders participated in subsequent high-level discussions, which resulted in an agreement to hold federal parliamentary elections through an indirect process, similar to those held in 2016.

The 17 September 2020 Political Agreement created three categories of ad-hoc electoral committees to support the conduct of the indirect elections:

The coordinated planning for elections security is under the responsibility of the National Electoral Security Task Force (NESTF), a Somali led structure comprising national and international security stakeholders. Through a UN Peace Building Fund (PBF) project, IESG has supported the Secretariat of the NESTF and its meetings. The PBF project is also equipping 12 Joint Operations Centres (JOCs) for a national JOC and one in each of the eleven elections centres to enhance the capacity of the Somali Security Forces (SSF) to plan and coordinate security operations, and to command and control the deployed forces. The staff for each JOC are expected to include 30% women. There will be a Women’s Situation Desk in each JOC that will receive complaints and reports of incidents of violence, harassment and intimidation against women and follow up with security forces as appropriate.

IESG has worked closely with the NIEC since its establishment in July 2015, providing technical advice, capacity development, temporary office space and equipment. With the support of donors, UNDP, UNSOM and the UN Peacebuilding Fund, IESG has supported NIEC in the construction of a data centre, a warehouse and an office block at the Commission’s headquarters in Mogadishu. The Group has also assisted in the establishment of NIEC offices at the federal member state level in Jubaland, South West State, Galmadug, Hirshabelle, and Puntland.

Training has been provided on the principles of electoral administration, the electoral cycle, electoral dispute resolution, gender-responsive elections, leadership, outreach and electoral operations. NIEC members have received support to visit various countries and familiarize themselves with the work of those nations’ electoral commissions. The NIEC also received support to engage with and participate in activities organized by the Arab States Electoral Management Bodies Organization and the Association of World Election Bodies.

IESG provided technical assistance to the NIEC in its preparations for voter registration, with potential registration sites being identified around the country. Procurement, delivery, asset management, distribution and training on the use of voter registration kits are also part of these preparations. IESG is supporting NIEC to develop a new five-year Strategic Plan to promote voter education, strengthen the country’s existing legal framework for managing future elections, and develop a comprehensive monitoring and evaluation plan to track performance on a regular basis, among other goals.

More than one hundred political parties had been registered by the NIEC on a temporary basis by March 2021.

Response to the COVID-19 Pandemic

Since the onset of the COVID-19 pandemic in 2020, flexible work arrangements for IESG and NIEC staff were undertaken to protect staff and help contain the spread of the virus. IESG provided two zoom licenses for the NIEC and one zoom license for the joint parliamentary ad hoc committee to facilitate timely consultations with all relevant staff and stakeholders. A series of trainings have been organized through zoom and Microsoft Teams teleconferencing tools for NIEC staff, and IESG provided links to on-line electoral administration courses that enabled many secretariat staff members to obtain certification.

In collaboration with the NIEC, IESG also prepared a document in both Somali and English on coronavirus policy and protocol.