Farhia Mohamed Kheyre: “I stand for female journalists’ rights come what may”

Farhia Mohamed Kheyre: “I stand for female journalists’ rights come what may”

Nairobi – Looking back at her career so far, Farhia Mohamed Kheyre sees an inevitability to its direction.

“I was born into war and brought up in war. I know how it is to be vulnerable and to yearn for a better life. The conflicts changed the social fabric of Somali society. Vulnerable groups like women continued to be marginalized. I still experience it first-hand as a female journalist. That’s what led me to journalism in the first place – that is, to tell their stories – and now to activism,” she says. “I stand for female journalists’ rights, come what may.”

At the age of 27, Ms. Kheyre has a wealth of experience gained at some of Somalia’s leading news outlets. It includes HornAfrik Radio, Capital Voice Radio, Shabelle Radio and TV, Somsat TV, Goobjoog Media Group and COSOB Magazine.

Like many other women in her profession, she encountered challenges in her path, which started with schooling in her home city of Mogadishu, and included graduating with a Bachelor’s degree in Public Administration and Leadership. She got her first media job in 2008 at the age of 15.

From that point onwards, she was often encouraged to leave journalism to protect her reputation and protection.

“That was because I was a journalist at the time of the Ethiopian invasion in 2008. It was the time when the Islamic Courts Union (ICU) government and Ethiopian forces fought fiercely. It was the hardest time to be a journalist in Somalia,” she recalls. 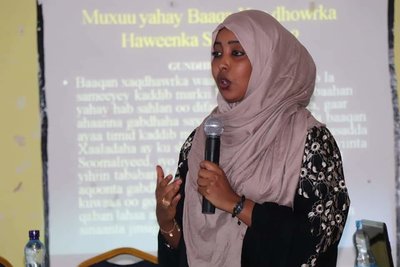 “As a journalist at the time, it was hard to be neutral and objective also,” she adds. “Many innocent Somalis were killed. I don’t how to describe it; it was a traumatic experience for me too.”

The disregard for human life she encountered left a deep impression: “It was a time of human rights violations in Somalia. What I saw led me to reflect deeply reflect on my chosen profession of journalism. Yes, I was contributing to society, but I felt I had to do more.”

In addition to the potential for violence - both targeted and indirect - faced as part of their work as media professionals at the time, other challenges faced by Somali journalists included the lack of a strong justice system to defend their rights.

It led Ms. Kheyre to start Somali Women Journalists (SWJ) in 2013, the first media association to speak up specifically for the rights of female journalists in the country, and aim to develop their capacity in the media sector. SWJO currently has 157 members drawn from across the country, and among the projects it is hoping to carry out there is a plan to survey the Somali media sector for a fuller picture on the number, status and situation of women in it.

The latest challenge on Ms. Kheyre’s agenda has been the Somali media’s coverage of the COVID-19 reponse. She notes that amidst the concern within the government and among members of the public, the media also have a special role to play in keeping people informed, while also taking precautions to protect themselves while reporting.

According to media reports, over recent weeks some Somali media workers covering the virus, including reporting on the availability of personal protection equipment, had been detained with some forced to drop their stories. The government subsequently classified the media as providing an essential service during the response to the COVID-19 pandemic.

“I believe that, in this time of crisis, journalists are relied upon to provide accurate and reliable information. Journalists are there to counter misinformation making the rounds on social media or even within discussions taking place within different parts of society. I call on the authorities to respect them and not harass them just because they stand for the truth, “she says, adding that the media must also observe professional, ethical standards.”

SWJ has come to be recognized for its work by some of Somalia’s international partners which include support for media development in their activities.

“We have been working with International Media Support and the FOJO Media Institute (IMS-Fojo) since 2016 and throughout all those years they have managed to support us in various areas, such as capacity-building, research and development needs, of female journalists. For sure, in that time, one of the greatest milestones achieved by SWJ and IMS-Fojo was the drafting of the ‘Gender Respect Declaration,’” Ms. Kheyre says. 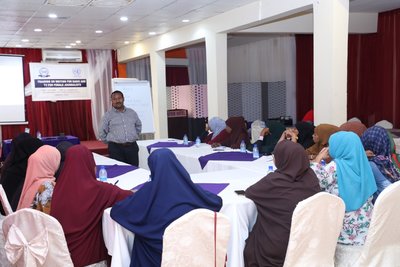 The document, signed on to by many Somali media outlets, advocates for the need for respect for the rights of women in the media. It includes a call for equal pay with male counterparts, maternity leave, and an end to sexual exploitation in the workplace.

“We have also conducted the first study ‘Gender Baseline Mapping Study’ with the help of IMS-FOJO. The study documented inequalities between male and female workers in Somalia’s media sector, and also led to greater recognition of the challenges that female journalists in the workplace,” the SWJ head notes.

As part of their efforts to support media development in the Horn of Africa country, the United States Embassy in Somalia and the United Nations Assistance Mission in Somalia (UNSOM) have also worked with SWJ in the past two years with training sessions on topics such as writing for television and radio, digital media and storytelling, as well as reporting in hostile environments and how to deliver first aid.

“I think skilled and professional journalists are crucial in relaying the positive narratives as the country rebuilds. We did really appreciate it,” Ms. Kheyre says.

Somalia is widely-recognized as a dangerous place to be a journalist. According to Amnesty International, journalists have been beaten, harassed, threatened, subjected to arbitrary arrests and intimidation by the authorities, including the police, military and other government officials. In addition, Al-Shabaab has targeted journalists with violence, intimidation and threats. A recent report by the advocacy group called for more to be done to ensure respect, protection, promotion and fulfilment of the right to freedom of expression, and media freedom before, during and after the country’s ‘one person, one vote’ elections.

The United Nations supports media development in Somalia through its work with various media associations. The world body believes that freedom of expression is a fundamental human right, as stated in Article 19 of the Universal Declaration of Human Rights, and has designated 3 May as World Press Freedom Day.

The theme of this year’s Day is ‘Journalism without Fear or Favour," with the following sub-themes: safety of women and men journalists and media workers, independent and professional journalism free from political and commercial influence, and gender equality in all aspect of the media. 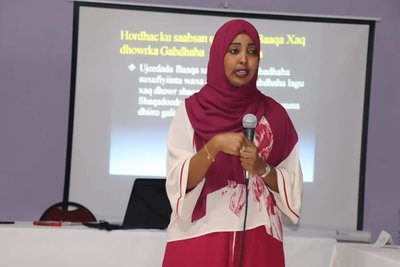 According to the UN Educational, Scientific and Cultural Organization (UNESCO), media freedom and access to information feed into the wider development objective of empowering people, and empowerment is a multi-dimensional social and political process that helps people gain control over their own lives.

UNESCO goes on to state that this can only be achieved through access to accurate, fair and unbiased information, representing a plurality of opinions, and the means to actively communicate vertically and horizontally, thereby participating in the active life of the community.