Mogadishu – Decades of war and civil unrest have taken their toll on Somalia’s environment, with attention firmly focused on the country’s humanitarian needs for a long time.

That focus has spread somewhat over recent years, with growing recognition of the importance of its environmental well-being to its long-term development.

Tied into this is the growing awareness of the impact of climate change, particularly its connection to land degradation, which, in turn, is closely linked to desertification, drought and unsustainable livestock and agricultural practices. Food insecurity and livelihoods, possible hazardous waste, lack of marine and coastal management, and the mitigation and management of natural disasters are other environmental concerns which are being discussed more and more.

Also tied into this is growing activism on the environment by young Somalis.

“Environmental problems such as deforestation affecting 80 per cent of Somalia’s lands, the dumping of waste and poisonous chemicals along Somalia’s coastline, as well as illegal fishing and poaching, to name a few, are common in Somalia,” says Hassan Mowlid Yasin.

Mr. Yasin is the 29-year-old co-founder and vice-executive director of a non-governmental organization, the Somali Greenpeace Association (SOGPA), which seeks to raise awareness among the public about the importance of taking care of the country’s environment. 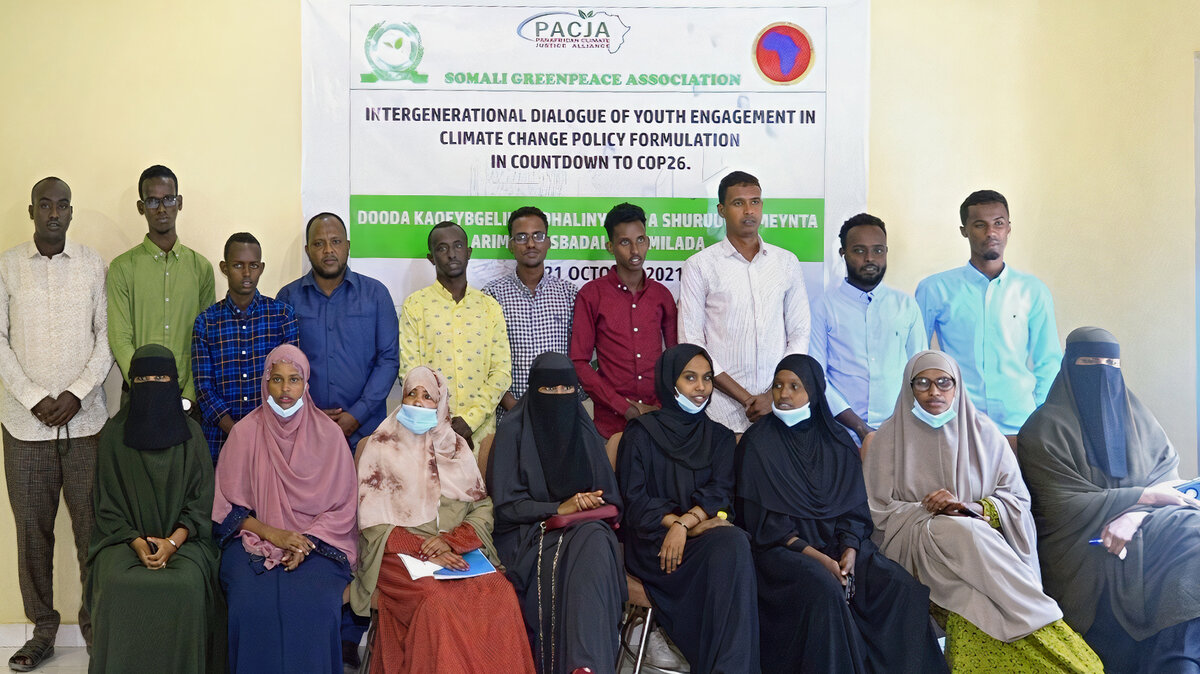 “The association envisions a national environment free from the threat of climate change with sustainable development, equity and justice for all. Our mission is to develop and promote development options relevant to Somalia in the international climate change dialogues, interventions and related processes,” Mr. Yasin says.

Formed in 2019 in Mogadishu, SOGPA has more than 40 members located around Somalia, including in the Benadir region, and the Federal Member States of Hirshabelle, South West State, Galmudug and Puntland.

SOGPA also serves as an umbrella grouping for community-level associations working on environmental issues. These are the Ma'ib Aid and Development Organization (MADO) in Baidoa, South West State; the Somali Community Development Organization (SOCDO) in Abudwak, Galmudug; Save the Environment in Garowe, in Puntland; and the Female Farah Foundation in Galdogob, in Puntland.

“Somalia has been facing the impact of climate change, such as floods, droughts, food insecurity and water shortages, for more than ten years – and what we are seeing now is the possibility of conflict brought about by competition for scarce resources because of climate change,” Mr. Yasin notes.

Mr. Yasin’s path to becoming an environmental activist was atypical – for most of his life, he had not considered pursuing studies nor a career in environmental work.

He was born in Mogadishu in 1992, and undertook his primary and secondary education at Yameis International School in the city of Galkayo. He returned to the country’s capital in 2013 when he began studying for a degree in public health at Jobkey University. Following graduation, he taught biology at local schools.

For Mr. Yasin, it was his own personal experiences that led him to environmental work.

“In 2005, when I lived in the Hamarweyne and Hamar Jajab districts of Mogadishu, flash floods occurred. I could not access the market because the whole area was covered with water, but I accepted this as part of just how things were,” he recalls.

“However, I became more aware in 2016 as there were flash floods in Hamarweyne which damaged the properties of the private school that I was teaching at – it destroyed books and teaching equipment, and the classrooms were full of water,” Mr. Yasin says. “Then, when I shifted in 2019 to the Danwadaagta area of Wadajir, flash floods in [the surrounding area] El- Qalow prevented me from going to work for more than two days because the road was impassable.”

These direct experiences awakened his interest and led him to undertake research on the issue through online courses and wide-ranging reading.

“There wasn’t very much local information on climate change and environmental issues in Somalia, so I had to look elsewhere and this included training such as the provided by ‘One UN Climate Change Learning Partnership (UN CC:Learn).’ I delved into this and, as a result, I have been accredited as a global climate change instructor by UN CC:Learn,” he says. 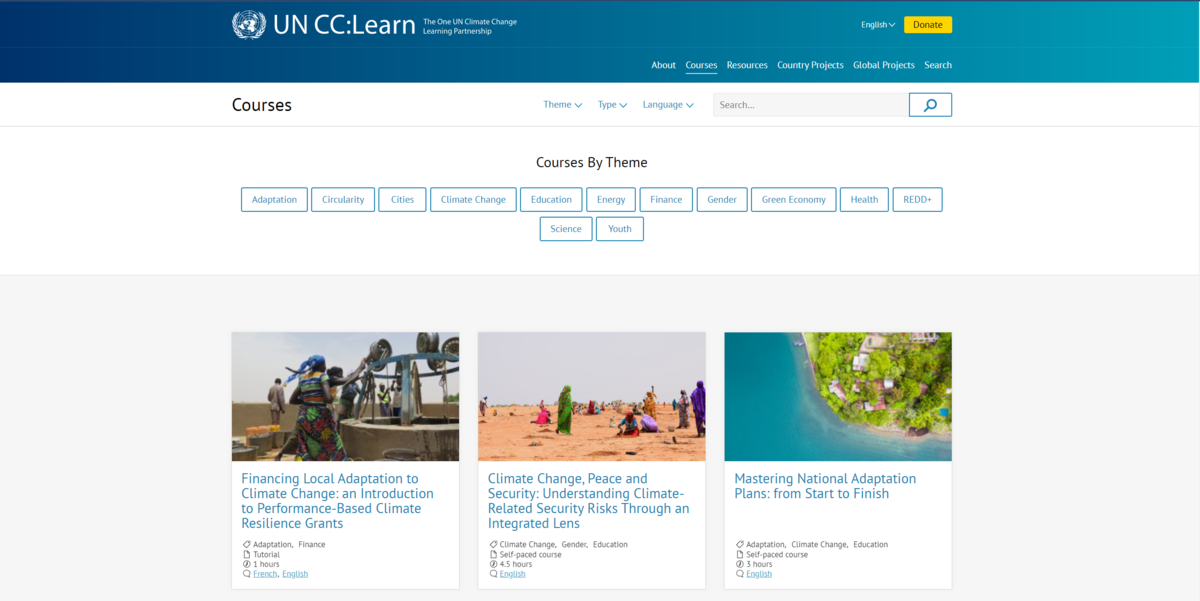 UN CC:Learn is a collaborative initiative of 36 multilateral organizations working together to help countries build the knowledge and skills they need to take action on climate change, including better climate literacy and other crucial skills to tackle this challenge. The initiative provides guidance and quality learning resources to support people, governments and businesses to understand, adapt, and build resilience to climate change.

Armed with the knowledge gained from the UN CC:Learn courses and elsewhere, Mr. Yasin now works full-time at SOGPA, overseeing its outreach and awareness-raising activities, and going out in person to speak on the environment.

“I was a part-time biology teacher at the Imran Bin Hussein Primary and Secondary School in Mogadishu, and in addition to my teaching, I was allowed some time to also impart information on environmental and climate change issues in Somalia,” he notes, adding that when visiting schools to talk about the environment, he sometimes goes from theoretical to practical activities such as the leading tree-planting activities.

In 2020, to celebrate its 100,000th certificate of course completion, UN CC:Learn asked its alumni to share their own stories for climate action, having been inspired by one of our courses. It received hundreds of stories from 87 countries and selected the best ten to inspire others, and awarded each of them an award certifying them as a 2020 UN CC:Learn Champion – Mr. Yasin was one of the awardees.

So far, more than 1,000 Somali youth have received targeted education and training on the environment through SOGPA.

Mr. Yasin and his fellow SOGPA members are not alone in his quest to educate Somali youth on the environmental needs of their country. He notes that the Federal Government of Somalia has taken several initiatives with policies and regulations on environmental protection and climate change.

These include the adoption in 2013 of a National Adaption Programme of Action on Climate Change, a National Environmental Policy/Management Bill in 2019 and a National Climate Change Policy in 2020, to address the risks associated with climate change in Somalia.

Moreover, the Directorate of Environment and Climate Change (DECC) in the Office of the Prime Minister (OPM) is very active in spearheading in the protection, conservation and restoration of the environment in Somalia. It leads all aspects of climate change and environmental programming and has the mandate to coordinate across line ministries, implement the National Determined Contributions and deliver on the National Adaptation plan.

Currently, along with tens of thousands of government representatives, businesses and civil society representatives from all over the world, DECC officials are in Glasgow, Scotland, on behalf of Somalia, to attend the twenty-sixth session of the Conference of the Parties (COP 26) at which discussions are underway to accelerate action towards the goals of the Paris Agreement and the UN Framework Convention on Climate Change.

The young activist also calls on the international community to assist, particularly through support for local organizations trying to make a difference on the ground in the Horn of Africa country.

“These organizations need support in areas such as organizational capacity development, help with operational cost, and funding for climate change and environmental education programmes, as well as environmental schemes that help create job opportunities for the Somali youth,” Mr. Yasin says.

According to studies by the UN Environment Programme (UNEP), over the last 60 years, at least 40 per cent of all internal conflicts around the world have been linked to the exploitation of natural resources, whether high-value resources such as timber and minerals, or scarce resources such as fertile land and water. 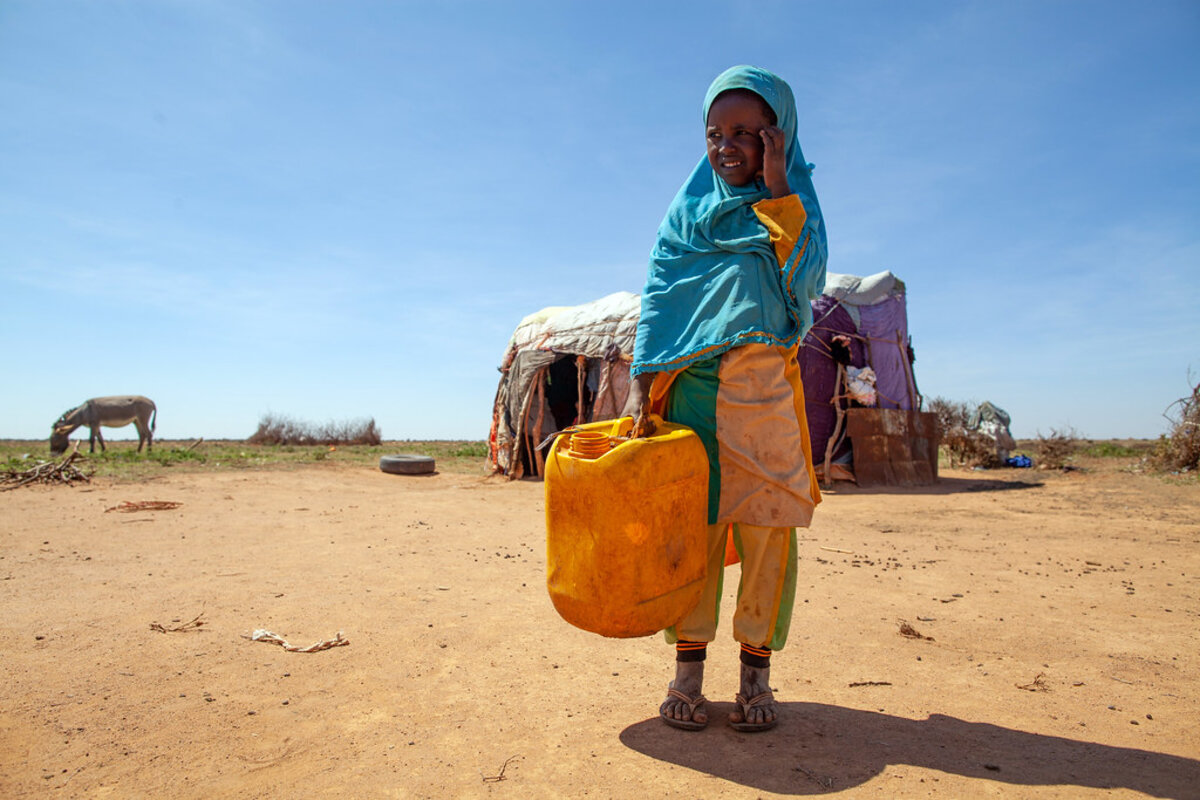 In recognition of this, in 2001, the UN General Assembly declared 6 November of each year as the International Day for Preventing the Exploitation of the Environment in War and Armed Conflict.

The United Nations attaches great importance to ensuring that action on the environment is part of peacebuilding strategies on the basis that there can be no durable peace if the natural resources that sustain livelihoods and ecosystems are destroyed. The UN Assistance Mission in Somalia (UNSOM) has climate risk management as a core part of its mandate.

“Supporting the government and strengthening the system is essential and partnering with supporting youth and community-led adaptation is the key to helping halt the impacts of climate change in Somalia,” says the UN Climate Security and Environment Advisor to Somalia, Christophe Hodder, who is also the first-ever such advisor appointed in a UN peace operation.

“Building the community resilience to climate shocks, while supporting the government’s own delivery mechanisms and integrating environmental approaches into security approaches will hopefully lead to a more sustainable peacebuilding,” he adds.