One person, one vote

Participants spoke about the need for one person, one vote elections rather than the current indirect elections that limit voters’ rights to elect leaders of their choice. They were in agreement that direct elections would benefit the country. 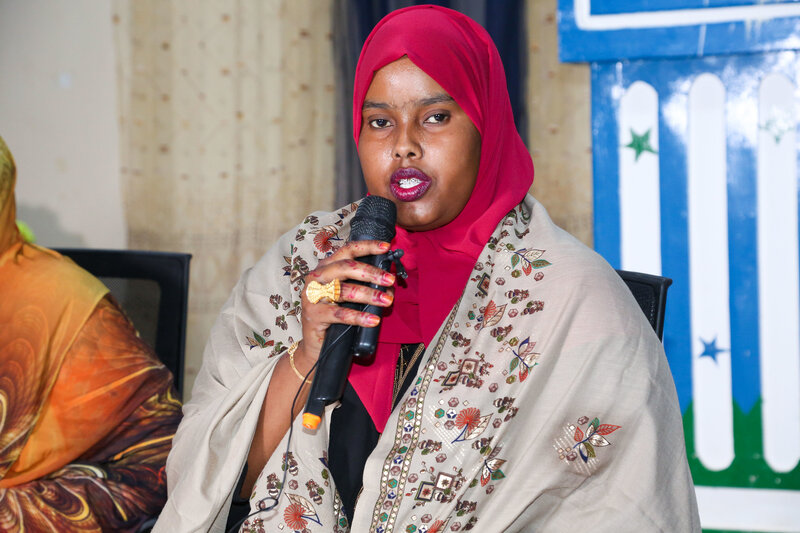 “We hope that our country will fully embrace democracy by adopting the one person, one vote model,” said Fartun Aden Hayefow, Chairperson of the Middle Shabelle Youth Association, addressing the audience gathered in Jowhar.

“Everyone who is eligible should be able to contest or vote for the candidate of their choice. If this happens, it will be a huge opportunity for the youth to contest for political positions. In addition, it is true that any government elected by the majority of the people will be more responsive to the needs of the electorate,” Ms. Hayefow added.

In the discussions, the opinions of the various groups about the future of democratic rights in Somalia often echoed each other.

“For this country to move forward and for our government to have real legitimacy, we need to have a one person, one vote election in which every eligible citizen takes part. Our democracy will be strengthened if we hold universal, free, and fair elections,” said Garaad Abdullahi Ducaale, a clan elder from Mogadishu. 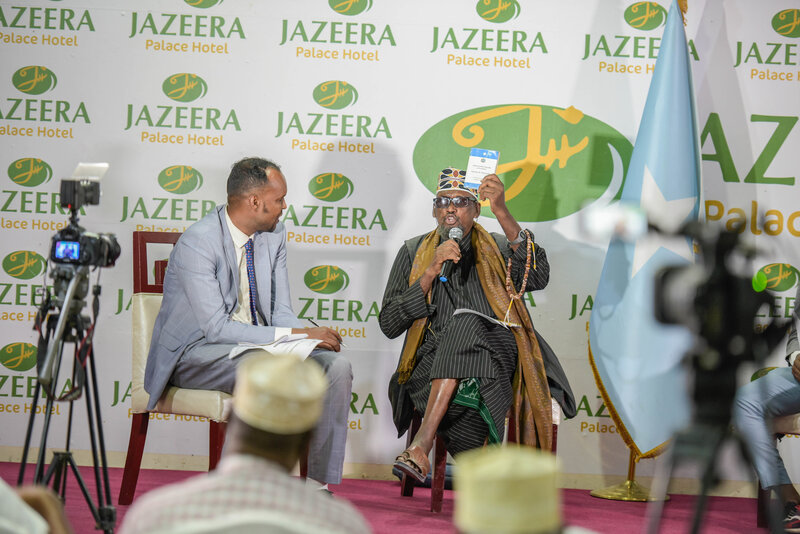 Since 2004, Somalia has been holding indirect elections through which traditional leaders select clan delegates, who in turn elect members of parliament. The members of parliament then elect the president of the country. These clan elders work under the 4.5 system, which gives the country’s four major clans the same weight, while a group of minority clans get the remaining half a point.

This method was criticised by some during the discussions for excluding the majority of Somalis from direct voting. In the words of one of the panellists in Baidoa, Salima Sheikh Shuceyb: “The 4.5 system is a challenge faced by every Somali, not only by women. If there is one person, one vote election, we [women] will give our vote to anyone we feel we can count on for our rights. It doesn't matter a man or a woman; we want to elect someone who can be trusted. If all Somalis come together, one person, one vote election will benefit the entire Somali nation. Still, I would like to encourage women to cast their votes, be heard and participate in politics.” 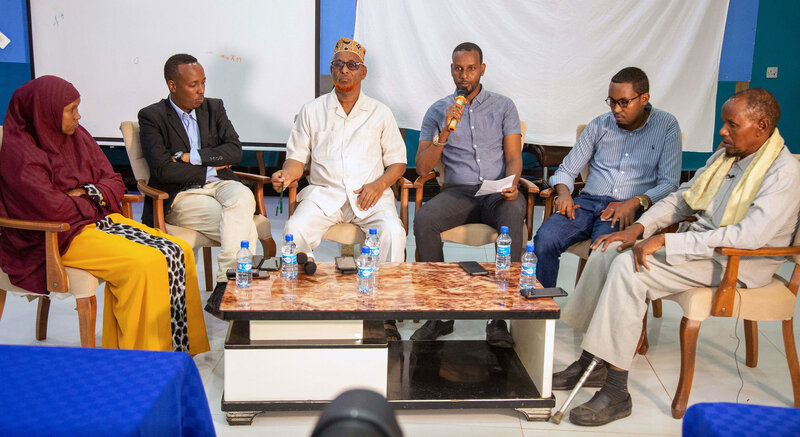 Somalia has one the world’s biggest ‘youth bulges’ – that is, around 60 per cent of its estimated population of 16 million people is under the age of 30, according to the World Population Prospects, produced by the United Nations Department of Economic and Social Affairs.

The significant number of young people means a greater need to deal with challenges related to their education, employment and a range of other issues, including their representation in the political and government spheres. 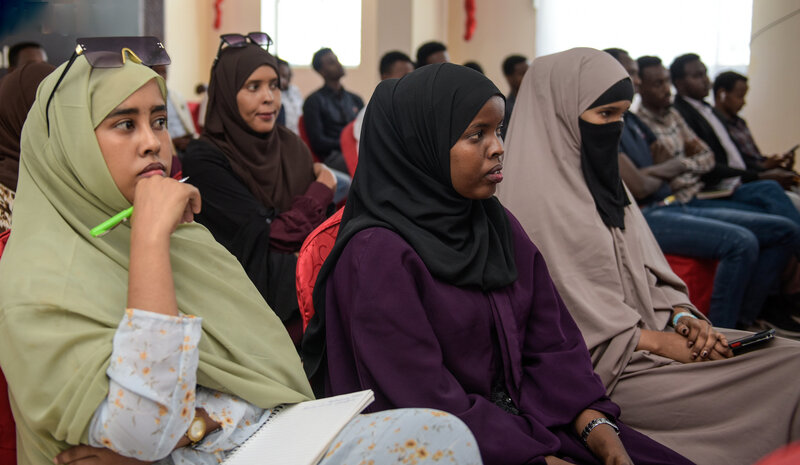 “If we adopt the one person, one vote method, it means that capable young people will no longer have to go through clan elders. Direct elections will offer an avenue for us to be elected on the strength of our campaign strategies and the policies presented to the people,” said student leader Muya Mizan Muya, on the sidelines of the public discussion in Kismayo, Jubaland State.

Creating an enabling environment for persons living with disabilities to fully participate in political processes as candidates or voters featured prominently during the discussions. 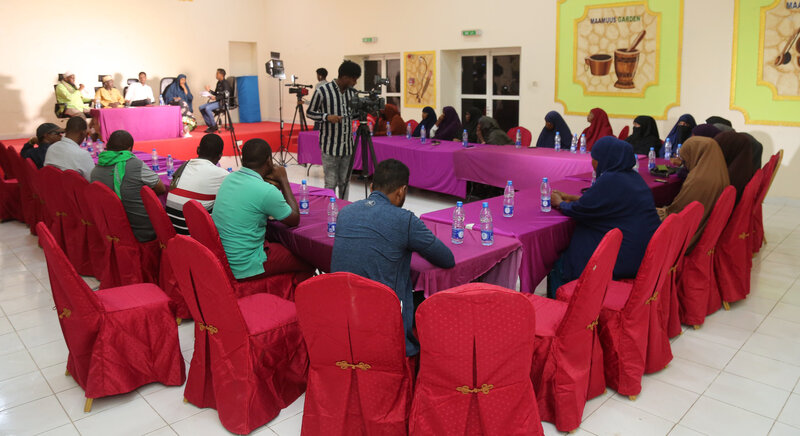 “I want to run for political office, but I am at a disadvantage because I am visually impaired and also because I come from a small clan that has no power or say on who is elected as our representative in the 0.5. The only chance I have is if direct elections take place,” said Dalmar Adow Maalin, a 32-year-old visually impaired aspiring politician from Mogadishu.

The electoral process, based on the provisional constitution adopted in 2012, stipulates that women need to make up at least 30 per cent of the seats in parliament. However, there are no policies or laws in place to protect this quota, a situation made worse by the power of the traditional leaders and religious scholars under the 4.5 clan formula.

Fatima Mohamed Ahmed, a women’s representative in Jowhar, Hirshabelle State, said ​​that a country could not make progress if it left the majority of its people (i.e. women) unrepresented and kept away from decision-making processes in matters that affect these people’s lives. 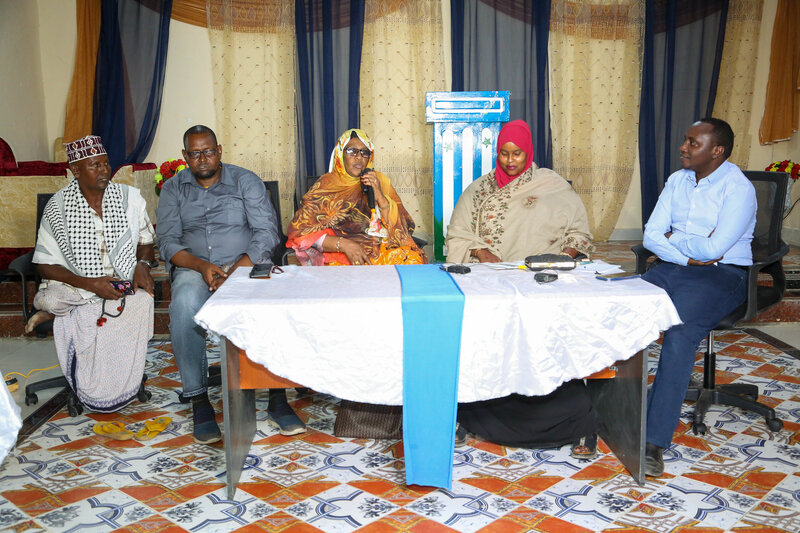 “We need to move away from indirect elections to one person, one vote so that women can freely campaign for political office or vote for candidates of their choice,” she added.

The public discussions, supported by UNSOM, are part of ongoing efforts to promote the inclusion of all Somalis in having a say in the future of their country.

The UN and international partners are committed to continuing to provide political, financial, technical and logistical support to Somalia’s electoral process. 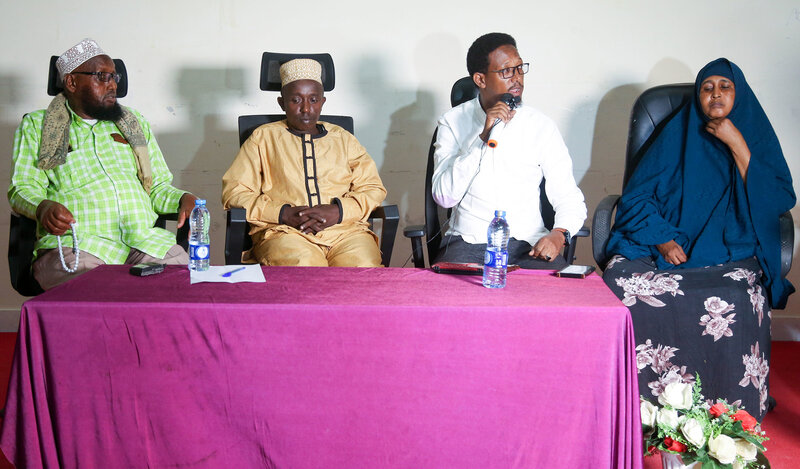