Mogadishu –   Shamsa Abdullahi Bybook was a young nurse in her twenties when she fled the mounting chaos and tensions of Mogadishu in 1989 to start a new life in the United Kingdom. She became an experienced midwife at a North London hospital with a master’s degree from Middlesex University and raised a family.

But she never forgot Somalia. On her periodic visits to her homeland, the mother of six was appalled by the poor medical facilities available to young pregnant women and the numbers who died during childbirth.

“We saw the suffering the mothers were going through,” the 59-year-old native of Kismaayo recalls. “The babies were also dying unnecessarily for (the lack) of a simple procedure called resuscitation and oxygen.”

In 2016, she decided to do something about it. Shamsa and her husband packed their bags and moved back to Mogadishu to found a maternity hospital offering quality reproductive services to Somali women – the Bybook Maternity Hospital.

Shamsa fully realized the risks her homecoming entailed. She was working in London as a part-time newsreader for the British Broadcasting Corporation’s Somali language service when she was sent to Kismaayo on assignment in 1997 and was briefly abducted by armed militia. 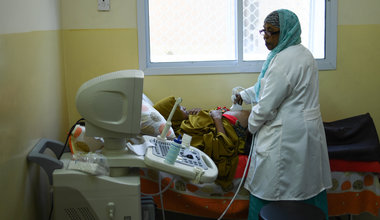 Within months of her return to Mogadishu, the maternity hospital opened its doors in the Hodan district of the Somali capital in October 2017. It offers a wide range of inpatient and outpatient services that include safe birthing, pediatric and childcare, female genital mutilation counselling, diagnostic sonography, postpartum care and infertility care.

“We decided to be different by focusing more on quality care. For example, we ensured that no newborn baby dies for lack of oxygen or resuscitation equipment or even incubators. This is important for the country,” she observes, adding that she has also launched a campaign touting the benefits of giving birth in a tub of warm water to reduce maternal mortality rates.

The 45-bed Bybook Maternity Hospital records an average of 50 safe deliveries each month and also treats newborns with breathing complications. Word of mouth has spread the reputation of the hospital far and wide, with pregnant women coming from towns as distant as Afgooye and Jowhar.

“Due to our positive effort, many people now know about our services,” notes Shamsa. “Even less educated mothers tell me they have been told that we have special equipment that help mothers and their newborn babies survive.”

However, the lack of effective regulation in Somalia’s health care sector remains a source of constant concern for Shamsa. She blames poor training and inadequate equipment for causing bodily harm and unnecessary loss of life on a regular basis.

“The staff who are working in the hospitals are not appropriately trained,” says Shamsa. “The problem is that nobody is controlling the quality of education and services that are offered.”

UNICEF notes that Somalia is plagued by inconsistent health care delivery structures, with medical services provided by a mix of health authorities, private entities and international and national non-governmental organizations. The former nurse urges Somalis wishing to improve the state of health care in their country to consider medicine as a career option and expand the number of hospitals that can save lives.

“My husband and I have left our children and our grandchildren to have this (maternity hospital) and help the people who are in need of our services,” she says. “I would advise everyone who has that ambition to go ahead with it because we have been through it. Do not stop, do not become discouraged.”