Mogadishu - Hundreds of women from across Somalia gathered on the Somali capital Mogadishu on 28-29 November to reaffirm their position and recommit themselves for peace, reconciliation and prevention of violent extremism.

The mood at the two-day Women’s Peace Forum was electric with peace songs and dancing taking centre stage, as participants from Galmudug, Puntland, South West, Jubbaland and HirShabelle states and Benadir region deliberated on ways of advancing peace efforts, reconciliation and defeating extremist elements in the country.

“It is our God given right to resist what divides us. It is imperative that as women, you hold up to values that build, instead of values that destroy,” Osman Adan Dhubow, the Federal Deputy Minister of Religious Affairs asserted, during the official opening of the forum on Wednesday.

Participants at the Forum discussed ways of preventing and countering violent extremism, women’s role in it, and strategies that would enhance women’s participation in peace, security and reconciliation efforts.

The Forum is a culmination of the country-wide consultations undertaken between July and November to determine ways and strategies to enhance women’s role in peace, reconciliation and the prevention of violent extremism consistent with the national PCVE strategy and national reconciliation framework.

“Women really want to have peace; and to have reconciliation is also very important. As women, when it comes to reconciliation, we are not in there,” remarked Fartun Abdisalam Adan, the Director of Elman Peace and Human Rights Foundation.

She underscored the importance of women taking a front seat in reconciliation efforts. “When it comes to reconciliation, women might just talk, but we are never involved. This is certainly a new beginning for Somali women to really be part of the reconciliation and to actually have peace in Somalia,” Ms. Fartun noted.

Batula Sheikh Ahmed Gaballe, the Chairperson of the Somali National Women’s Organization, delivered a keynote speech at the forum, where she underscored the important role women play in the prevention, mediation and resolution of conflicts.

“The objective of this forum is to come up with a strategy to prevent and stop those spreading and harboring extremist ideologies; to conduct awareness campaigns, hold consultations and meetings and clearly show that Somali women are no longer spectators and occupying the backbench in peace initiatives,” she stated.

The consultations and the peace fora have been women’s initiative led by Somali National Women’s Organization with involvement and active engagement of women peace activists and advocates from across the country.

At the closing ceremony of the Forum on Thursday, The Deputy Special Representative of the UN Secretary-General for Somalia and Resident and Humanitarian Coordinator Peter de Clercq emphasized on the vital role of Somali women in securing and maintaining sustained peace in Somalia. He stressed however, that their role in making peace often goes unrecognized.

“Somali women play a key role in supporting their families and communities and keeping the society together during conflict. However, women are often excluded from the formal peace processes; their role in peacebuilding, as peace-makers and agents of change is not fully recognized, hence the importance of this Forum as a step towards ensuring women have a place at the table,” he stated. 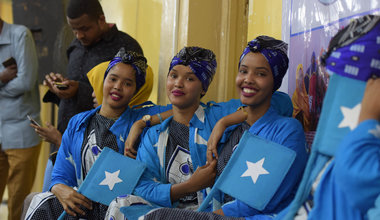 He also reiterated that the United Nations will continue to support initiatives of women to materialize the commitments and decisions of this Forum.

The Forum is supported by the Royal Netherlands Embassy and the United Nations.

“Our efforts would not be possible without the continuing support of the UN,” said Ms. Batula.

In 2000, the United Nations recognized the vital role that women can play in peace and security with the UN Security Council’s adoption of Security Council resolution 1325, which reaffirmed the important role of women in the prevention and resolution of conflicts, peace negotiations, peace-building, peacekeeping, humanitarian response and in post-conflict reconstruction.