Mogadishu – Somalia and international partners reaffirmed their commitment to end the country’s recurring cycle of humanitarian crises and promote its future development during a high-level roundtable on drought response and recovery today.

Opened by Prime Minister Hassan Ali Khaire, the meeting featured the formal launch of the 2018 Humanitarian Response Plan that seeks to raise $1.5 billion to address the needs of 5.4 million people nationwide. The key findings of a Drought Impact Needs Assessment were presented during the meeting, with damages and losses caused by the drought now expected to exceed $3.25 billion.

The outcomes of the needs assessment were used to develop a Recovery and Resilience Framework, whose guiding principles will enable the Federal Government of Somalia and the country’s Federal Member States to devise medium- and long-term solutions to the root causes of Somalia’s vulnerability to drought.

“We want to work together as humanitarians with development partners so that as we respond to immediate humanitarian needs, we are implementing long-term solutions to build resilience,” said UN Under Secretary-General for Humanitarian Affairs and Emergency Relief Coordinator Mark Lowcock.

Mr. Lowcock expressed concern that humanitarian needs in Somalia may persist in the face of the country’s prolonged drought and armed conflict, which have caused the internal displacement of over two million people.

He also underscored the resolve of international partners to collaborate with the Somali government’s strategy to foster sustainable recovery and reduce the causes of the country’s vulnerability to drought.

“We want to work behind the framework set by the government to agree to measurable results to achieve between now and 2022,” he stated.

UN Under Secretary-General and Administrator of the United Nations Development Programme (UNDP), Achim Steiner, lauded the successful efforts of federal and state-level governments to avert a famine in 2017 with strong support from the international community totaling nearly $1.3 billion.

“You should therefore look back with some satisfaction, at having proven first of all the capacity of the government to lead the nation through this tough period and its capacity to bring together the international community and rapidly align resources to deal with this issue,” noted Mr. Steiner, who is making his first visit to Somalia since he was named to head UNDP last year. 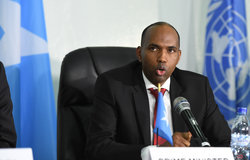 Prime Minister Khaire welcomed the presentation of the Recovery and Resilience Framework, which was led by the Federal Government last year in partnership with Federal Member States, the United Nations, the World Bank and the European Union.

“With a substantial number of our population impacted by the 2016/2017 drought, and with the anticipation of yet another poor rainy season in a few months, we cannot downplay the continued need for a forward-looking plan with concerted efforts from all of us,” noted the Prime Minister.

He assured Somalia’s humanitarian and development partners that the Federal Government and the Federal Member States would work tirelessly to achieve coherence among all humanitarian actors and their operations.

The UN’s top envoy for Somalia Michael Keating warned that a failure to provide tangible solutions to the country’s humanitarian crises posed a threat to the country’s fledgling stability. “The situation facing the population of this country is truly terrible, especially minority groups and people freshly displaced in cities, living on the land with no security and no certainty,” Mr. Keating said.

The Recovery and Resilience Framework is expected to guide the recovery efforts of the Somali government, partners and other relevant stakeholders. It is also designed to facilitate collective efforts to implement the recommendations of the Drought Impact Needs Assessment on achieving the long-term goal of resilient development.

Baidoa, 19 February 2020 – “I would like to see changes that address our interests,” Nurta Mohamed, a resident of the Qasab 2 camp for internally displaced persons (IDPs), said today at a gathering in the city of Baidoa, in Somalia's South West State.