Across Somalia, thousands of students brave the elements to sit crucial exams for university entrance

Across Somalia, thousands of students brave the elements to sit crucial exams for university entrance

Mogadishu, Baidoa, Kismayo – With cyclones bearing down on Somalia, causing flooding and upheaval throughout various parts of the country this past week, it seemed natural for much of daily life to come to a halt.

That was not the case for more than 27,000 students from 120 secondary schools across most of the country’s southern half.

The students braved the adverse conditions to undertake one of the most important steps in their education and overall futures: the government-administered Unified National Examinations.

Organized by the federal and regional ministries of education and administered in the areas of Benadir, Jubbaland, Southwest, Galmudug and HirShabelle, the exams covered a range of subjects which include languages such as English, Arabic and Somali, as well as mathematics, history, geography, biology and Islamic studies.

A good result can help ensure a brighter future for the students, allowing them to continue their studies in their chosen fields at university.

“The government standardized and unified the examinations three years ago. We expect the students to produce good results,” said an examinations supervisor at the Somali National University, Abdikadir Mohamed Ahmed.

Officials and educators say the growth in enrolment confirms the integrity of the exam process, and is indicative that reforms in Somalia’s education sector are effective.

In Mogadishu, where the examinations were launched by Prime Minister Hassan Ali Khaire last Saturday, candidates from more than 300 secondary schools around the city undertook the testing in 63 examination centres across the capital.

In the capital, issues of security, safety and access were some of the considerations used to select the examination centres.

“As a result of the relative peace and steady political, the process is now streamlined,” noted Abdifatah Barre Issack, an 18-year-old student from Super Commercial Secondary School, with hopes of pursuing a degree in agriculture.

“The government, especially the Ministry of Education, is doing a good job. We are now following tight schedules and a strict calendar for the national examinations, unlike in the past when such systems and processes did not exist,” says Hamza Abdikarim, a 19-year-old student from Iftin Secondary School.

“Baidoa is privileged to have three centres where the Unified Examinations are being conducted,” said Mano Mohamed Noor, the headmistress of Abdalla Derow Primary and Secondary School, which has been an examination centre for the last three years. Some 260 students took the exam there. 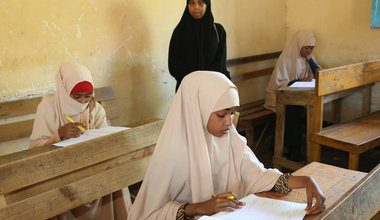 In Jubbaland state, in the country’s south, 645 students sat the exam, with girls accounting for a sharp increase in registrations.

“When you at look at girl’s education, positive changes seem to be happening. Last year 130 girls sat for the national examinations while, this year, the number rose to over 220 girls,” said the local examinations director, Noor Shale.

However, some students have yet to finish the exams, with the foul weather to blame. In the Hiraan region of south-west Somalia, examinations were paused on Sunday due to the heavy rains that caused flooding and displacement. A new date for the testing is expected to be announced soon.

29 Jun 2020
During a visit to the national laboratory, UN envoy commends advances in testing of COVID-19, and welcomes efforts to build medical capacity for the future

Mogadishu – On a visit to Somalia’s National Public Health Reference Laboratory (NPHRL) today, the United Nations envoy to the country commended Somalia’s advances in diagnostic testing for COVID-19, and highlighted the importance of the national laboratory and other laboratories