Mogadishu – Like so many other boys around the world, when Aweys Haji Nur was young, he dreamed of becoming a professional footballer.

However, the time was not right – he was born in 1984, which meant that his adolescence coincided with the civil war which broke out in 1991 and devastated so much of Somalia over the next 30 years.

So Mr. Nur shelved his dreams of fame and glory on the football pitch, and pursued a livelihood in another field. 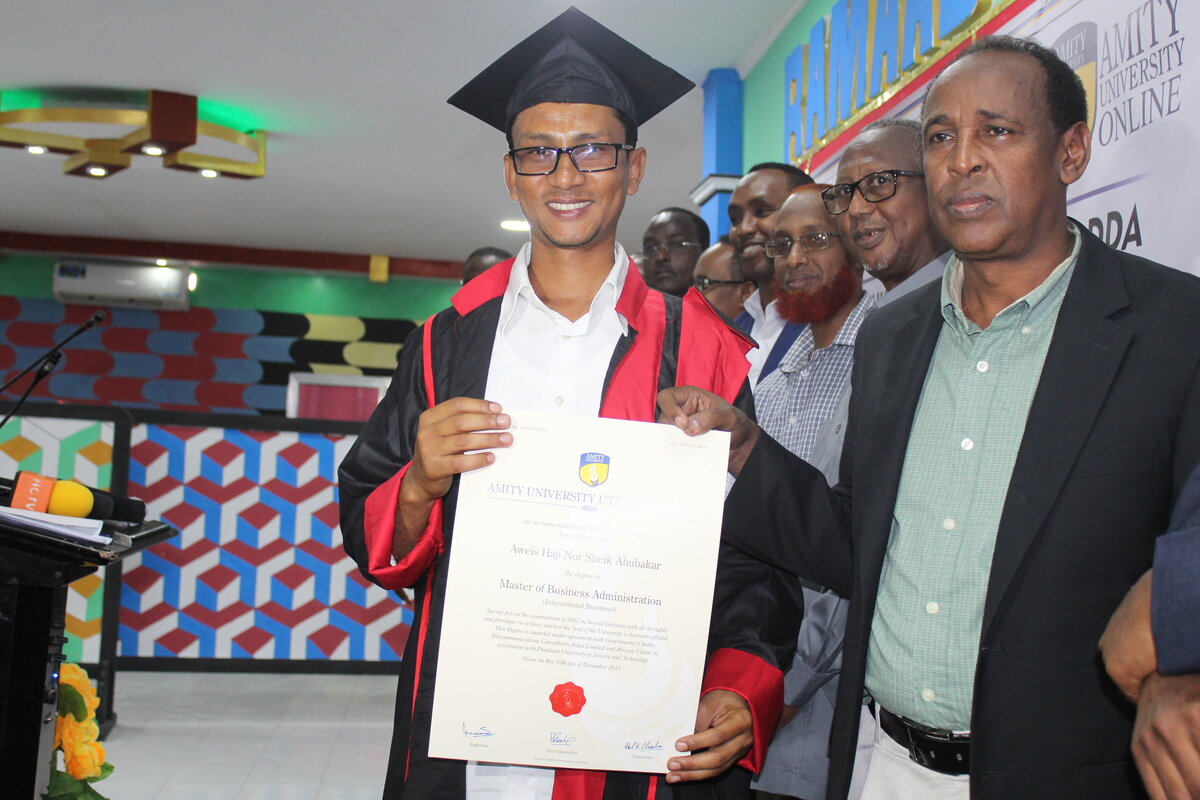 Born and raised in Mogadishu, Mr. Nur attended Tadamun Primary and Secondary School, and continued his secondary education at Usama Bin Zeyd High School. He went on to tertiary studies, completing a bachelor’s degree in Political Science and Information at Mogadishu University in 2013.

He followed this up with a Master’s in International Business Administration at Amity University, in India, through distance education, from 2014 to 2017. He then went on to a successful career as a senior journalist and news director for well-known Somali media houses such as Horn-Afrik and Mustaqbal Media, among others. He is currently the director of Goobjoog TV. 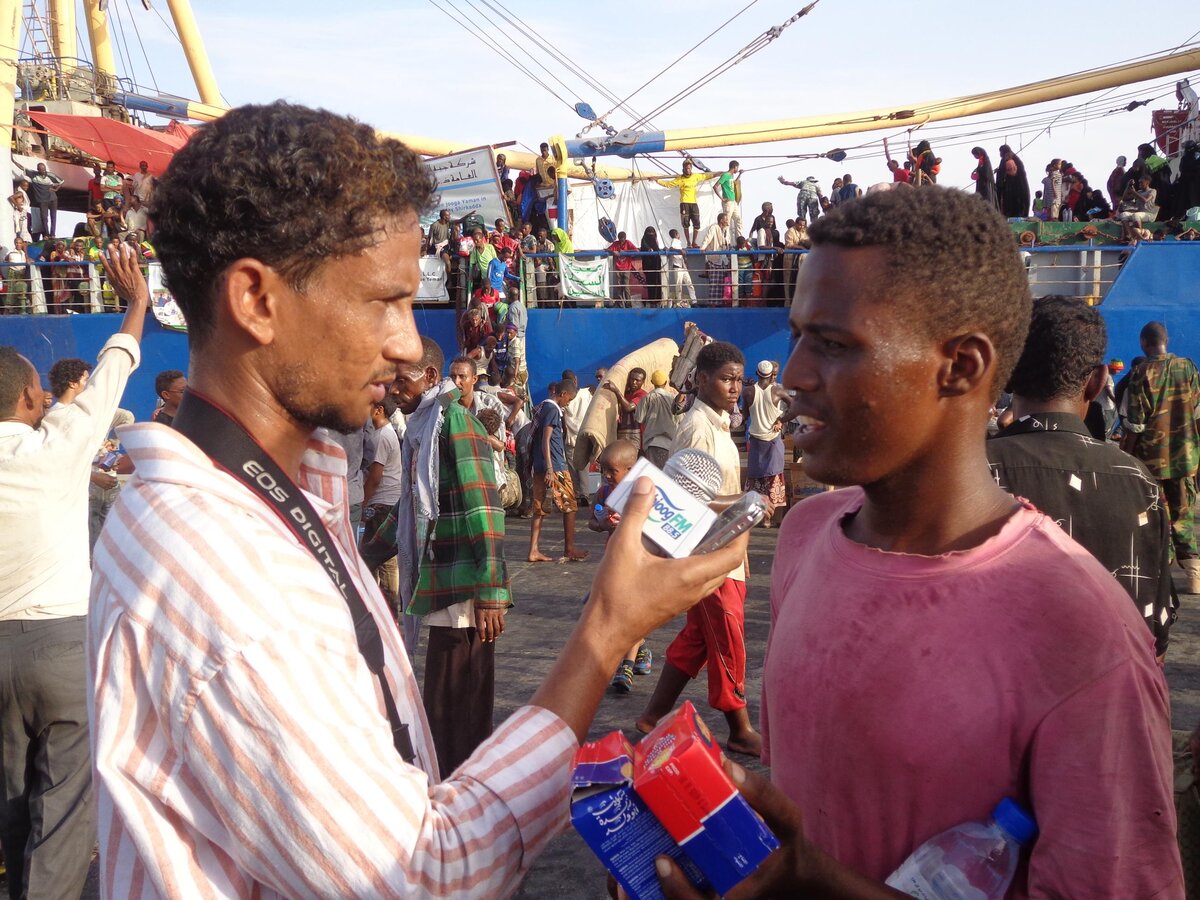 But, despite his achievements in the media sector, his football dream never quite left him.

In his spare time, he avidly followed football as a pastime and, occasionally, volunteered to coach local boys in Mogadishu who aspired to be football players.

“Whenever I saw boys playing in front of my house, I saw myself as a child and it made me sad. We still don’t have enough opportunities for children to enable them to pursue their dreams – I saw how they could have achieved their dreams if they had had someone to help them,” says Mr. Nur, a father of seven.

“I think Somali children are less fortunate than children in other parts of the world because they don’t have a secure, serene environment to develop their football skills,” he adds. 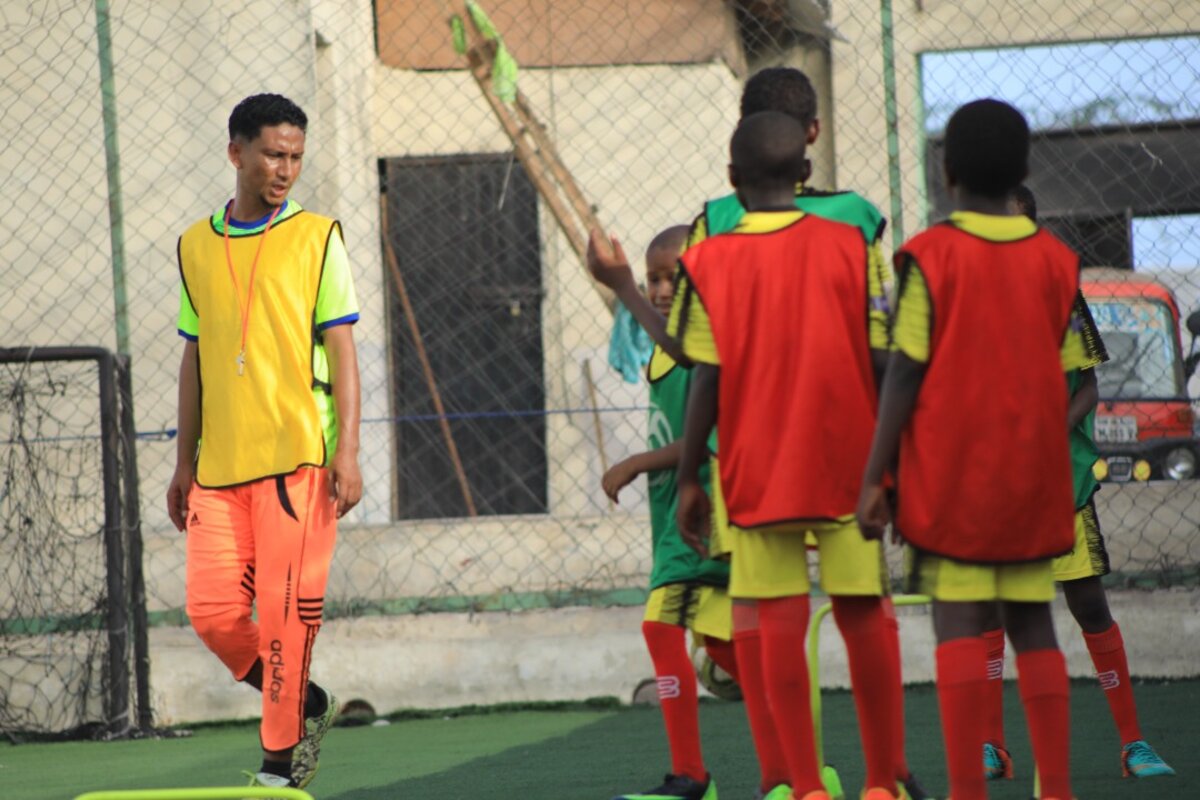 Looking into options, he noted that there was no formal system for football talent development for youngsters in Somalia – and no one seemed to be interested in introducing one, especially given the country’s focus on rebuilding after decades of conflict.

Tired of waiting and unable to completely shed his passion for the ‘beautiful game,’ Mr. Nur took matters in his own hands.

In 2018, he opened the ITAAL Football Academy, a training centre for youngsters with aspirations like Mr. Nur once had. 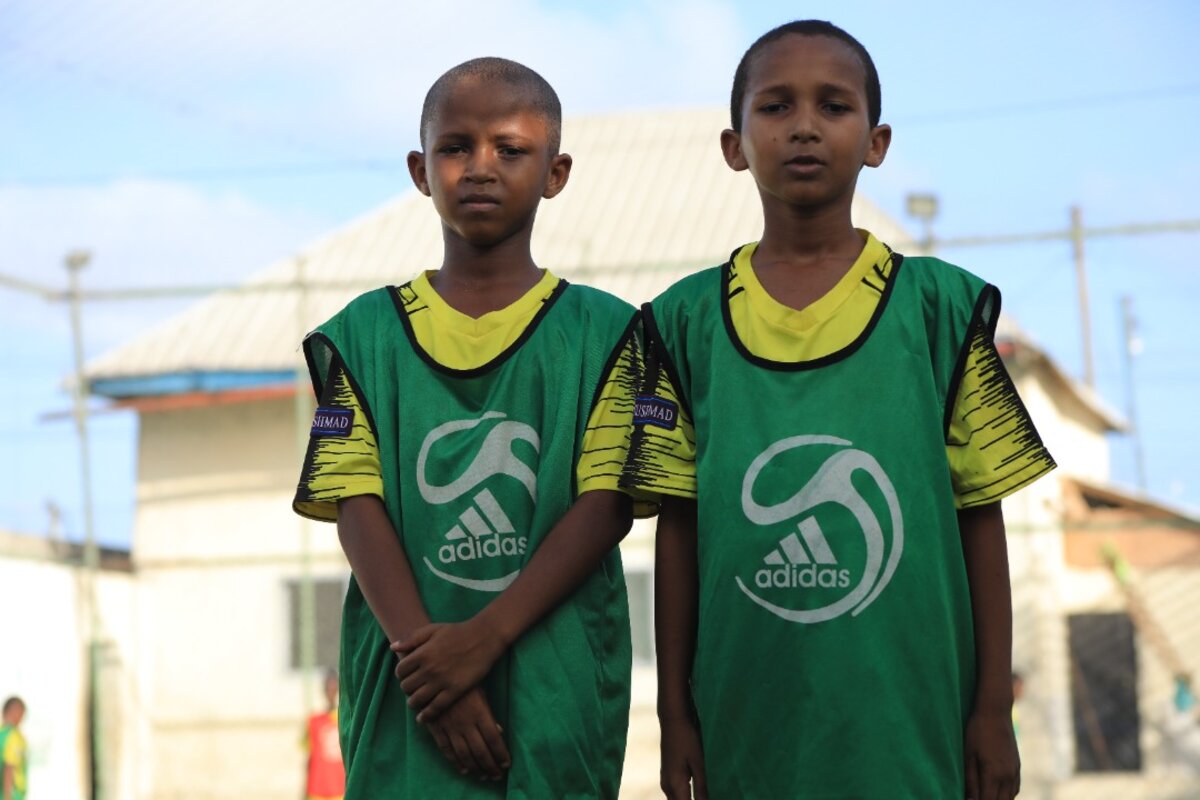 The academy’s first two trainees were two of Mr. Nur’s sons. Currently, there are 30 boys enrolled in the academy. Located in Mogadishu’s Wadajir district and consisting of a playground and a small office, it caters to children under eleven years of age, with enrolment determined not only by the physical fitness and aptitude of a candidate but also by their enthusiasm for the game.

The academy charges no fees. Mr. Nur uses his own money to fund the academy's day-to-day operations, and he occasionally receives assistance from friends who share his passion for football and desire to help Somali youth. 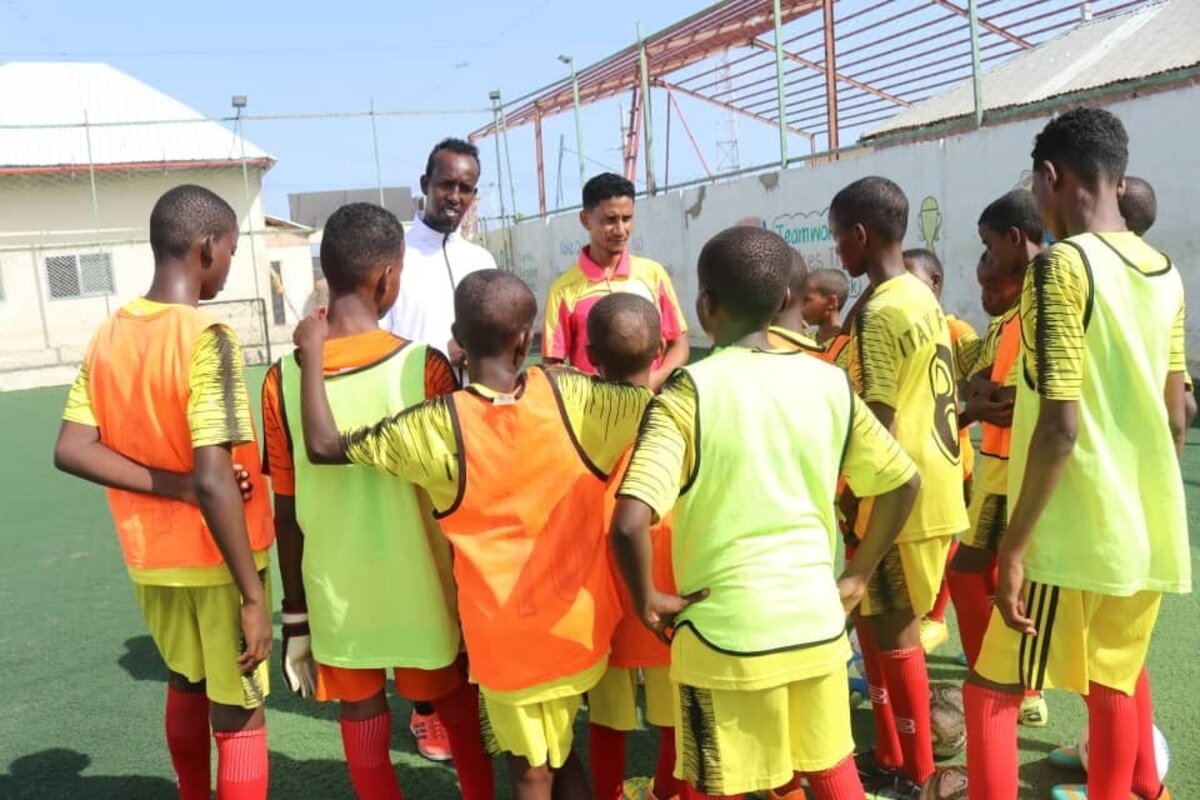 Mr. Nur is not just focussed on the administration side of the academy; he also takes to the field as one of its trainers. To this end, he earned his certification as a youth football coach from the International Federation of Association Football (FIFA) in 2021.

Since its inception five years ago, ITAAL Football Academy teams have attended four competitions recognised by the Somali Football Federation (SFF) – three of which they won. The academy players also participated in the FIFA Grassroots Tournament in Mogadishu in October 2021.

In order to have options for talented young players who can go on to develop their potential, Mr. Nur established links with Somali football authorities and some clubs in Somalia and abroad. 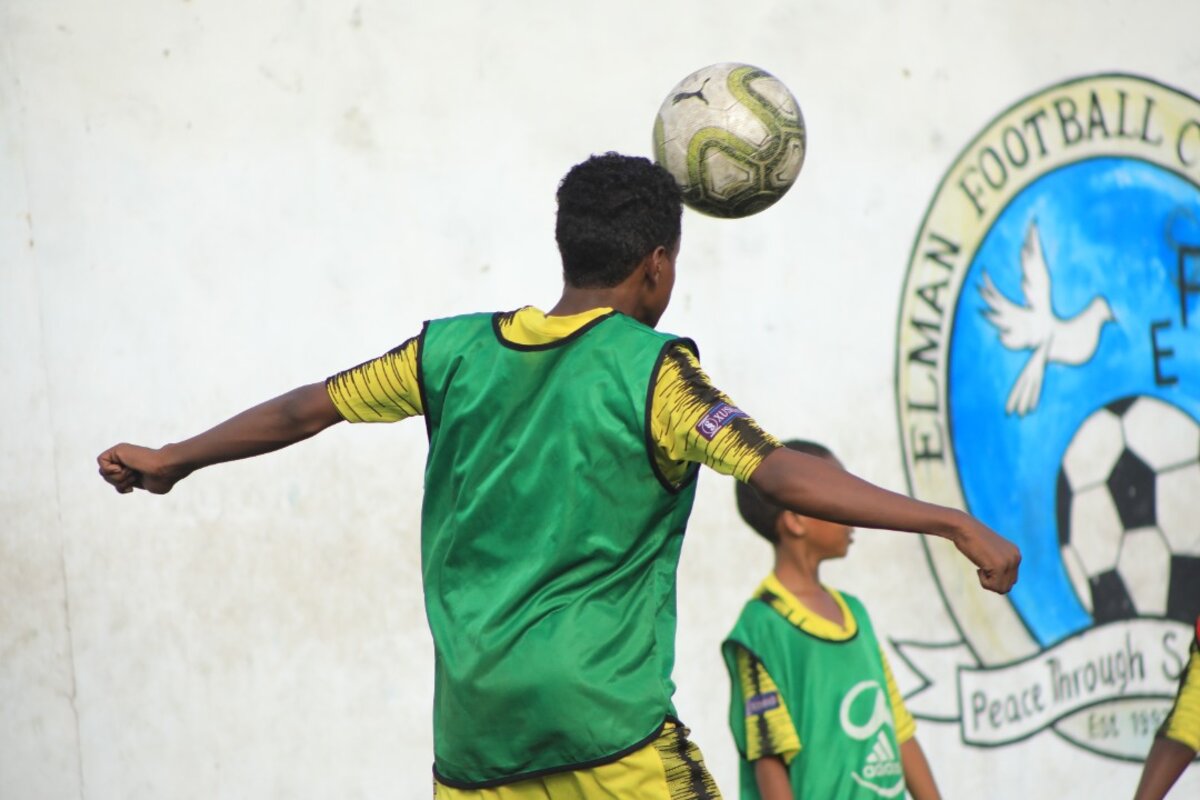 The Somali Football Federation has nothing but praise for Mr. Nur’s efforts, describing them as a key step in developing the country’s football scene.

"The Somali Football Federation sees Aweys' effort as a young man preparing young players who we believe will benefit the country and form the backbone of football development… I believe his efforts will improve Somali football,” says the SFF’s Technical Director, Awil Ismail Mohamed.

“We encourage him to continue this brilliant work,” Mr. Mohamed continues. “There is an existing partnership between us and Aweys, and the Federation unconditionally supports people like Aweys in his volunteering to support Somali children in desperate need of reliable sports training.” 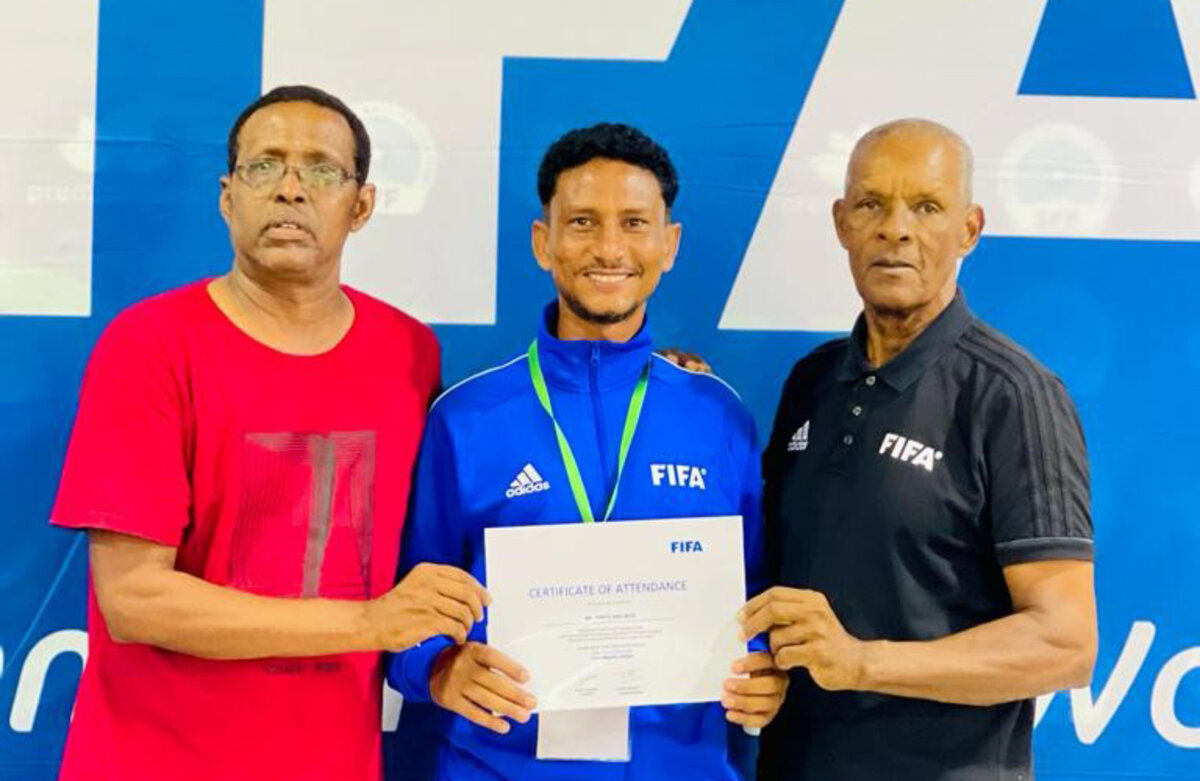 Parents of trainees at the ITAAL Football Academy agree.

"I see this opportunity as both fun and education because there are few such places where children develop their skills during school vacations… this has helped my kids avoid playing on the streets where they used to be more in danger or going to distant places where it is difficult to keep an eye on them, and I believe this is an opportunity we have had and I recommend that it be expanded," says Sultana Mohamed, a mother of two boys enrolled at the academy. 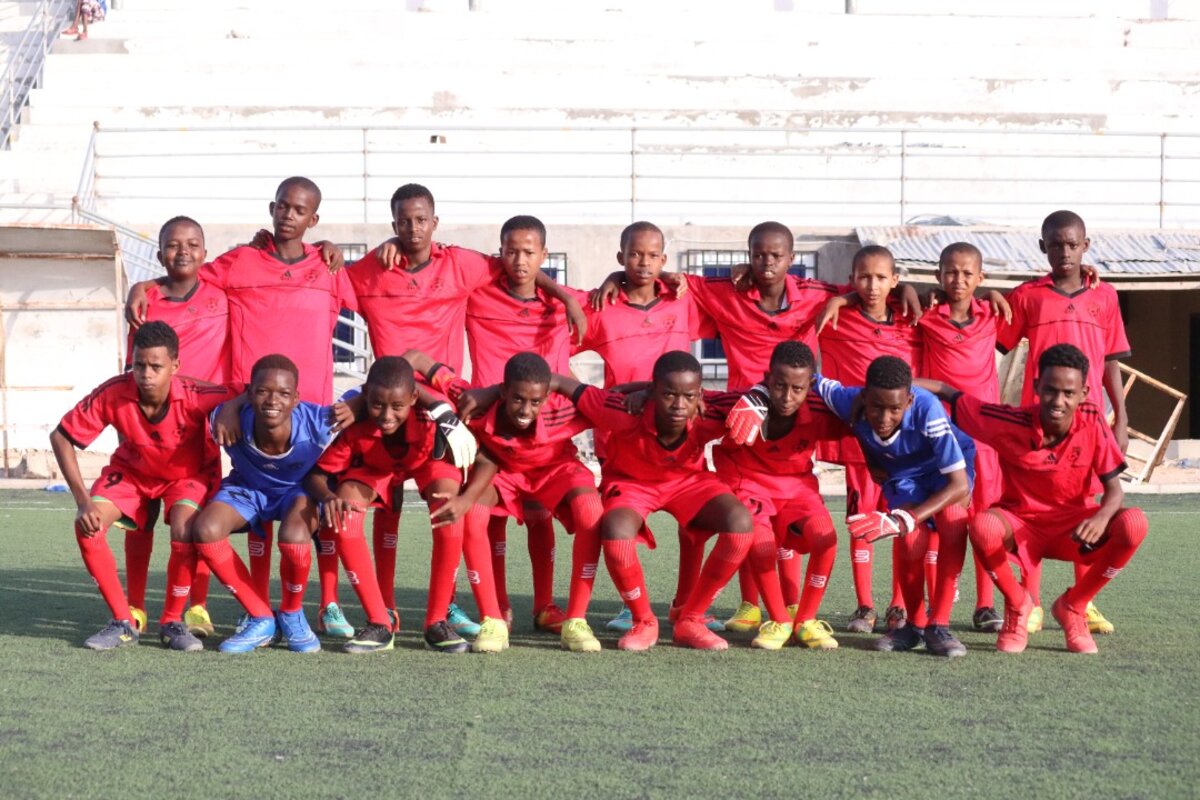 Mr. Nur says the reputation that the ITAAL Football Academy enjoys has grown since its inception.

“Parents are constantly contacting me and requesting that their child be enrolled at the academy, which makes me happy," he notes.

But despite the growing acclaim and recognition, ensuring the academy’s viability is no easy feat and, despite support from some quarters, it remains a testament to Mr. Nur’s commitment and passion. 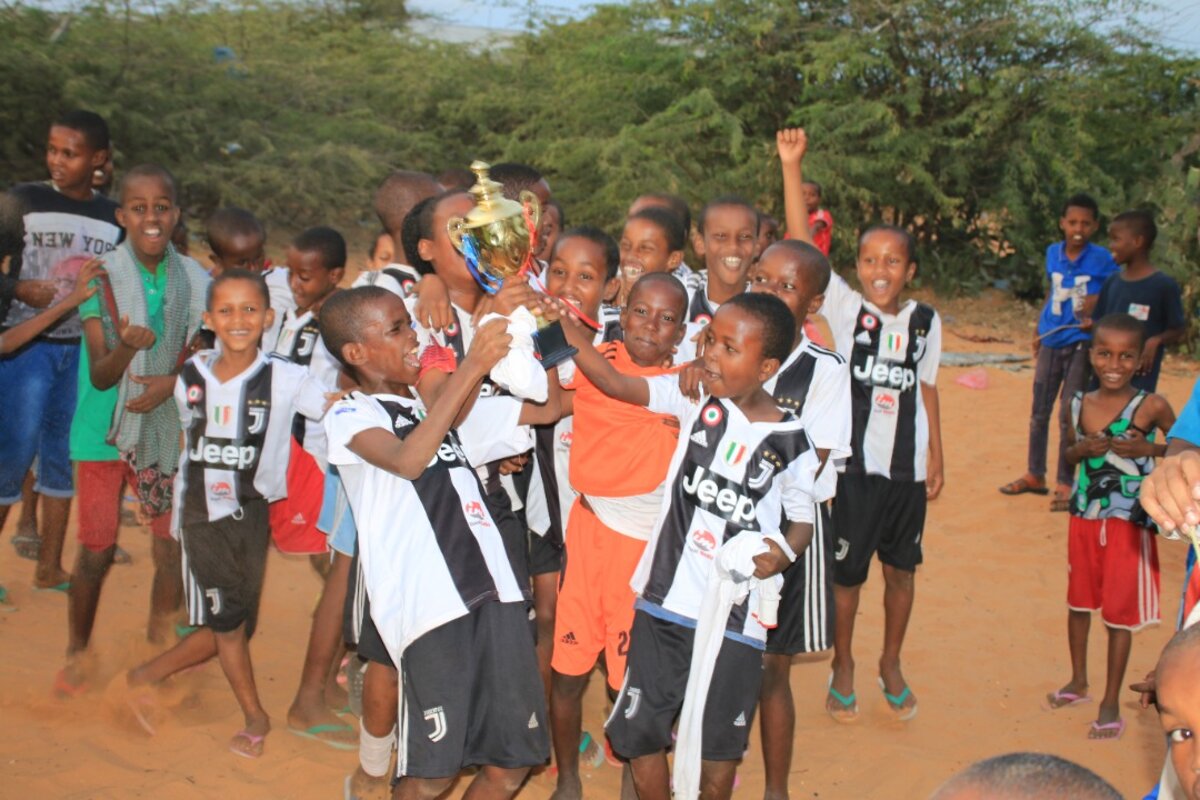 "At the moment, I have no one to support me. I spend part of my salary on football, and there are individuals or clubs that sometimes donate balls or sporting gear," Mr. Nur says.

“We have limited options for training spaces. We do not have access to independent stadiums to train for hours, and so we have to rent them,” he continues. “We do not have much money; we rent only for a few hours, and that is not enough. Also, since they are children, when getting to and from the stadiums, we have to transport them by bus, and we have to pay for that too.” 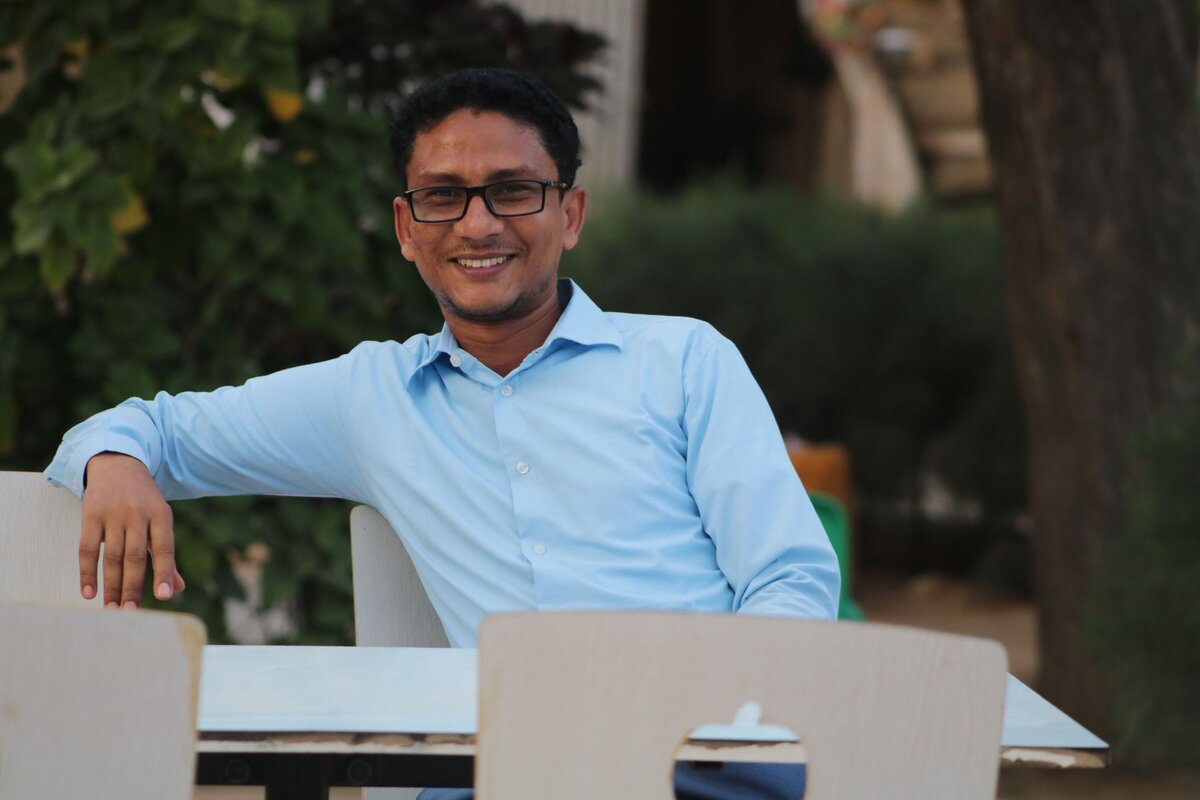 Mr. Nur is hopeful about obtaining further support for the academy. In the meantime, he says he remains a footballer at heart, and is committed to helping develop today’s young Somalis into tomorrow’s footballing heroes.

"I expect that the football profession in Somalia will change immensely,” he says. “The ITAAL Football Academy will produce excellent players who can compete, and it will ensure that every Somali child has a suitable place to train to be the next football star.” 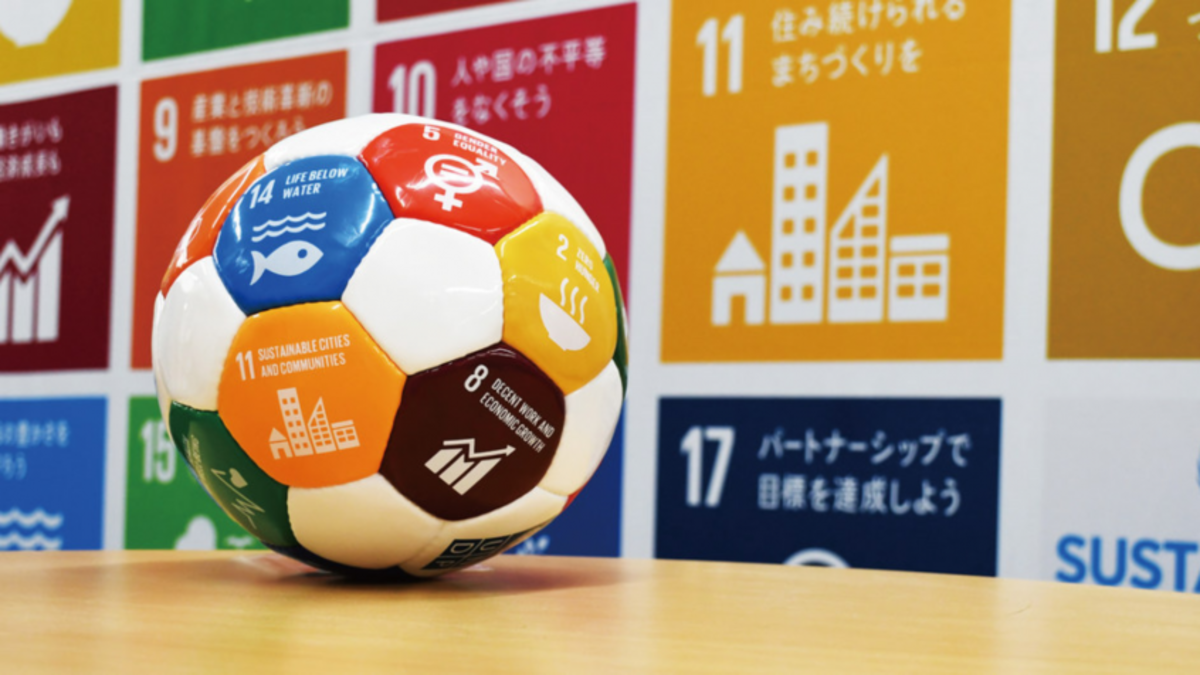 The United Nations has long recognised the power of sport to play a positive role in the world, with it being a fundamental right and a powerful tool to strengthen social ties and promote sustainable development and peace, as well as solidarity and respect for all.

In light of its impact, in 2013, the UN General Assembly declared 6 April as the annual International Day of Sport for Development and Peace (IDSDP) to recognise the positive impact which sport and physical activity play in communities and in people’s lives across the globe.

“Sport has the power to align our passion, energy and enthusiasm around a collective cause. And that is precisely when hope can be nurtured and trust can be regained. It is in our collective interest to harness the tremendous power of sport to help build a better and more sustainable future for all," the UN Deputy Secretary-General, Amina J. Mohammed, said on this year’s observance of IDSDP. 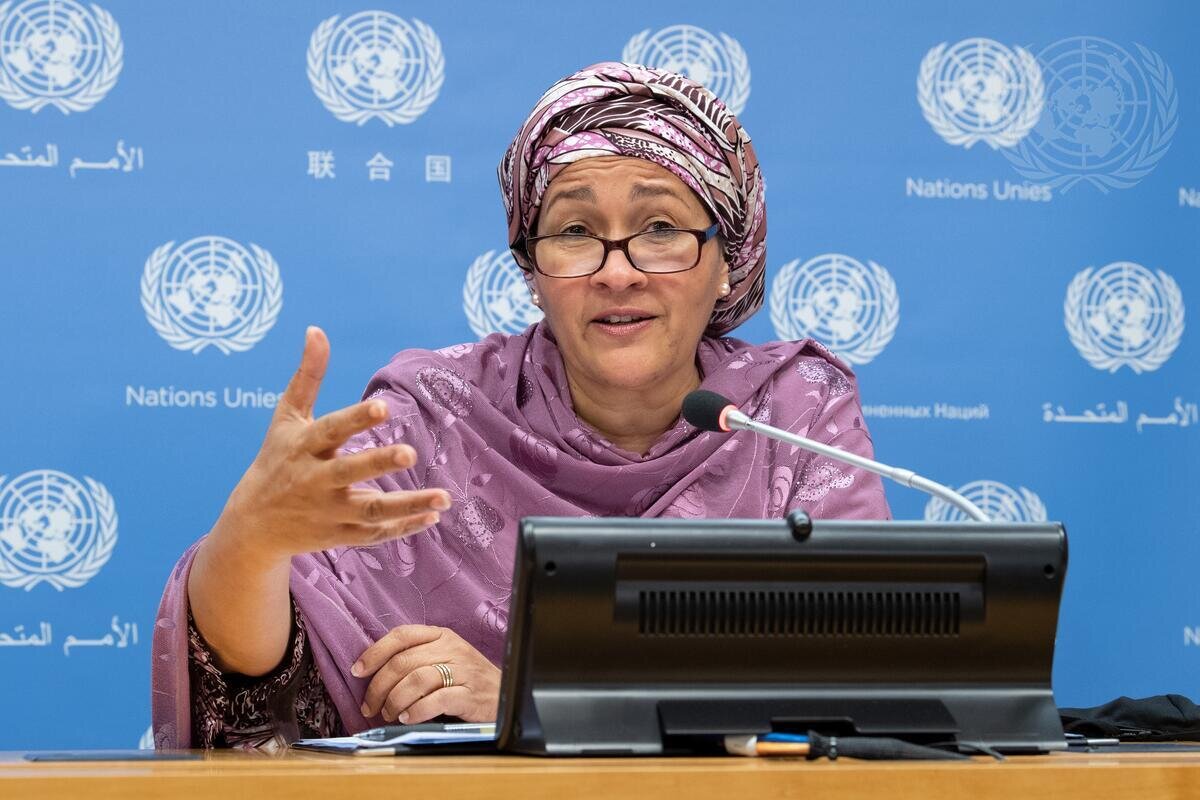