The new United Nations envoy to Somalia today continued his round of introductory meetings with state leaders with a visit to South West State, where he flagged the need for it hold “credible and acceptable” presidential elections next month and renewed his call for collaboration to solve ongoing tensions between the country’s federal and state authorities.

The ongoing tensions between the Federal Government of Somalia (FGS) and the country’s Federal Member States was a major topic in their meeting. 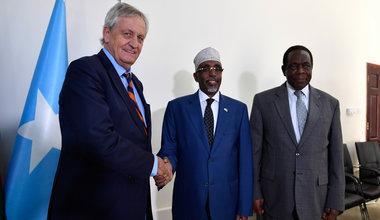 “We’re exploring ways of bringing them together in the hope that Somalis can face down their problems together rather than going separately,” Mr. Haysom of their discussions.

“Basically, we’ve been telling them is what we’re facing is a quite serious political issue – the stand-off between the Federal Member States and the Federal Government may well paralyze our efforts to help Somalia get back on its feet,” he added. “And we’re asking all of the relevant role-players to get together to find a solution and to make the necessary compromises so that they can work collaboratively rather than against each other.”

President Sharif Hassan Sheikh Aden was recently selected as the chairperson of the Council of Inter-state Cooperation (CIC), which brings together the heads of Somalia’s Federal Member States. In a recently-issued communique,  the CIC – with the exception of Hirshabelle – announced it would hold off cooperation with the FGS.

“He has been very open and thorough in his approach, in his analysis of what is happening, and this is important for us to help us understand what is happening and help us find the best way to help the people of Somalia,” Amb. Madeira said following their meeting.

The UN and AU Special Representatives have, so far, had similar discussions with the presidents of Jubaland and HirShabelle. 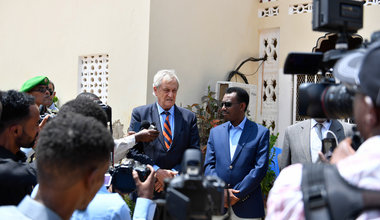 Other topics discussed with President Sharif Hassan Sheikh Aden included development, security and political matters – with the latter including the state’s presidential elections in November this year.

“Let me say right from the outset: the international community does not have a candidate [and] is not backing any candidate in this race, but we do want to see – and I’ve asked the president to reassure me – that the elections will be conducted in a way which all parties will able to accept, and he has reassured me that this indeed will be the case,” Mr. Haysom said at a joint press conference after their meeting, alongside the president and AU envoy.

“We want this election to go smoothly, peacefully, and we, as AMISOM, are going to do our best, our utmost, to ensure that security is guaranteed, and we want the collaboration of everybody and every candidate that they do not indulge in situations that are likely to flare up violence and instability,” Amb. Madeira, who also heads the African Union Mission in Somalia (AMISOM) peacekeeping operation, told the media.

“We want a peaceful Somalia, and South West [State] is an important part of the entire process of stabilization of the country,’ he added. 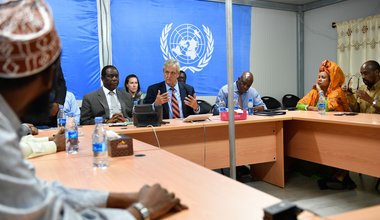 The UN and AU officials also met with the Speaker of South West State’s Parliament, Abdulkadir Shariif Shekhuna, who briefed them on preparations for the presidential poll due on Saturday, 17 November.

“You’ll appreciate the elections in the South West State will be the first of the many elections to follow and in that sense will be setting the standard. It’s also clear that the elections will be contested, hotly contested, and for that reason it’s important that the outcome should be accepted by those who participate,” Mr. Haysom said in a subsequent press encounter with the Speaker and Amb. Madeira.

“So we were reassured to hear from the speaker in regard to the detailed arrangements which will govern the election and we wish South West [State] all the best in holding those elections,” he noted, adding the importance of the polls being held in “a credible and acceptable manner in accordance with the rules that they’ve established so that the result is accepted.”

Mr. Haysom and Amb. Madeira echoed these comments in their later meeting with seven people standing as candidates in the presidential election.