Mogadishu – As Somalia crosses its 30th anniversary since the outbreak its civil war, senior United Nations officials today paid tribute to the courage and resilience of Somali citizens who have persevered through some of the “toughest conditions in any country on the planet over the past three decades.”

“While enormous challenges remain and the road ahead, at times, looks long and hilly, it is important to acknowledge the progress that has been made,” said the UN Secretary-General’s Special Representative for Somalia, James Swan. 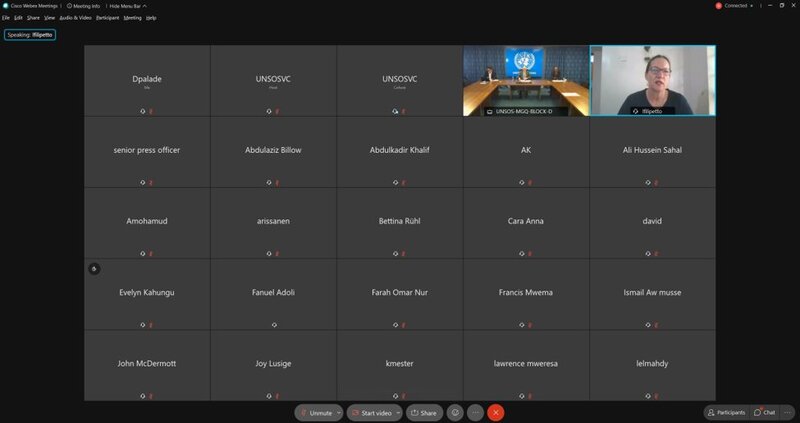 The UN envoy was addressing the media at a virtual press conference in Mogadishu, at which he and other senior UN officials spoke about the range of the world body’ support over the past year but also for 2021.

With Mr. Swan – who also heads the UN Assistance Mission in Somalia (UNSOM) – was the UN Secretary-General’s Deputy Special Representative for Somalia, Adam Abdelmoula, who also serves as Humanitarian Coordinator and Resident Coordinator for the country, and, from Nairobi, the Head of the UN Support Office in Somalia (UNSOS), Assistant Secretary-General Lisa Filipetto.

In addition to UNSOS and UNSOM, there are more than 20 UN agencies, funds and programmes working with Somalis in a wide range of areas. These include long-term development and immediate humanitarian needs, as well as UNSOM’s ‘good offices,’ which refer to its mediating role in resolving differences and disputes. 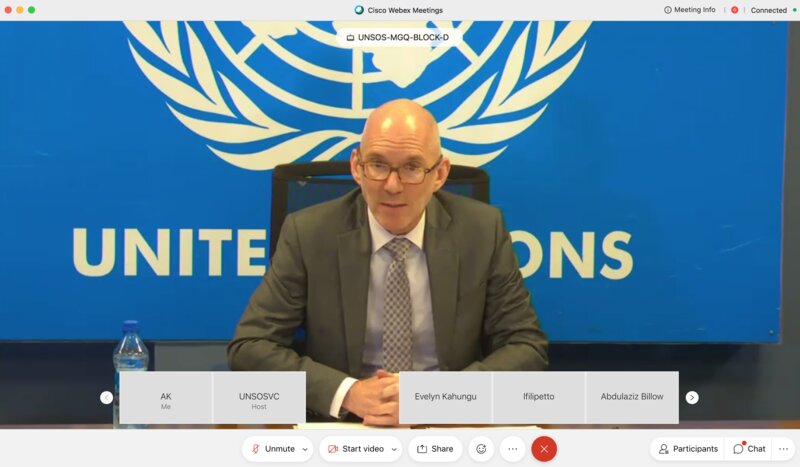 “I also want to stress that, ultimately, the work of the United Nations is an expression of objectives communicated by the broader international community,” Mr. Swan said.

“Most of the programmatic work is funded through generous contributions by donor countries that have expressed eagerness to contribute to progress in Somalia and use UN entities as a vehicle for channeling that support to Somalis,” he added. “So, really, while we speak of the United Nations, in this case it genuinely does represent a broader commitment of the international community, through our Organization, to help the Somali people.”

While the UN family’s work in the Horn of Africa country was highlighted throughout the media briefing, Somalia’s current electoral situation also figured prominently.

Over recent months, UNSOM has been involved in efforts to advance the country’s national elections.

Along with other international partners, the UN Mission has been urging Somalia’s political leaders to  pursue compromise and dialogue to progress with the implementation of an electoral agreement that had been reached on 17 September last year – and which is currently at an impasse. 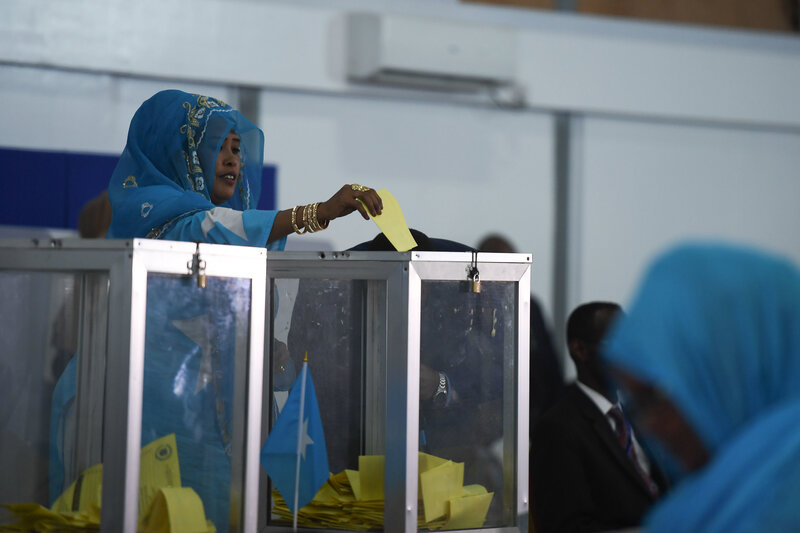 “In collective meetings with other international partners, and in bilateral meetings, we have stressed the importance of reaching a common understanding on next steps prior to February 8, in order to avoid any uncertainty,” Mr. Swan said, adding that on various occasions the international partners have expressed their opposition to parallel or alternative processes, and made clear that there must be no violence.

“We continue to urge Somali leaders [to show] goodwill, to redouble their efforts to resolve the outstanding issues of implementation of the electoral process and resolve those issues through dialogue and to reach agreement on the way forward for the good of the country” Mr. Swan said.

In his remarks at the virtual press conference, Mr. Abdelmoula spoke of the wide range of support provided by the world body in Somalia’s development and humanitarian spheres, noting both challenges and progress.

He said Somalia had begun 2021 with a number of challenges similar to those which afflicted it in 2020. These are the so-called ‘triple shock’ of climate change, which includes floods and droughts; a desert locust outbreak; and the COVID-19 pandemic. 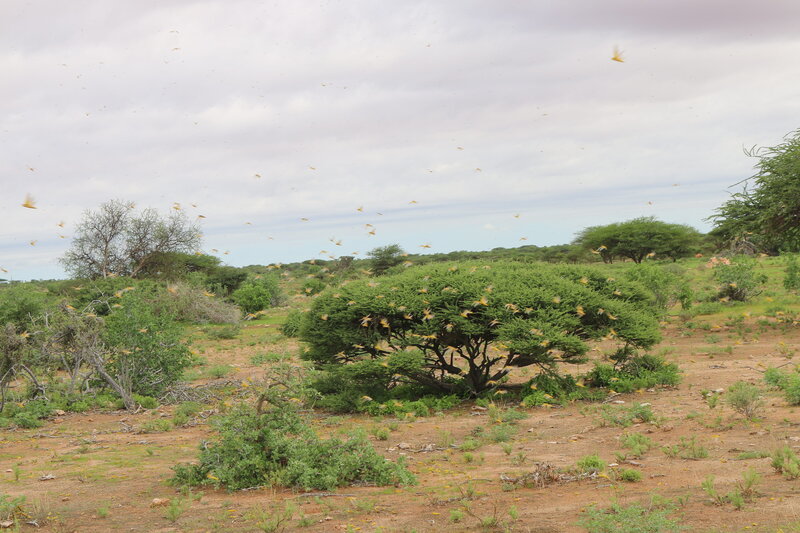 The United Nations provided aid, including nutrition supplies and food assistance, to 120,000 people affected when Cyclone Gati made landfall in Puntland’s Bari region in November last year. The storm was one of the strongest cyclones to affect Somalia in decades.

The desert locust infestation affecting Somalia – which “has lived up to its biblical connotations,” according to Mr. Abdelmoula – has affected almost 700,000 people and close to 300,000 hectares of land. The UN official said the UN had, so far, provided support to some 25,900 farming households and sprayed more than 110,000 hectares of land with biopesticides.

On COVID-19, the UN has supported Somalia’s fragile health system with its response. This has involved buttressing the government’s health machinery with testing laboratories, specialized isolation centres, training of more than 5,000 frontline health workers and the distribution of thousands of sets of personal protective equipment.

“All of these steps have also had a longer-term impact,” Mr. Abdelmoula said. “They have helped build and reinforce the health system – both improving the health of Somalis and helping train health ministry and medical personnel for the longer-term.”

The UN Deputy Special Representative also highlighted how COVID-19 had an effect beyond Somalis’ health and well-being, with the country’s education sector also hard-hit. The United Nations has provided education-in-emergency assistance to close to 540,000 children.

“These are just some of examples of where we have been able to make a small difference. But this is not about patting ourselves on the back or resting on any laurels,” Mr. Abdelmoula said. “The factors that went into the ‘triple shock’ have not gone away – in fact, they will exacerbate humanitarian needs this year. With our partners, we will need to step up these efforts in reaching the most vulnerable people affected.”

On the economic front, the ‘triple shock’ has disrupted the trajectory of Somalia towards economic recovery, but there are signs of hope.

“Somalia continues to make steady progress under the Heavily Indebted Poor Countries – or HIPC – Initiative. Somalia’s debt stood at $5.3 billion at the end of 2018. This debt will be reduced to $557 million if Somalia achieves the Completion Point expected in 2023,” Mr. Abdelmoula said. 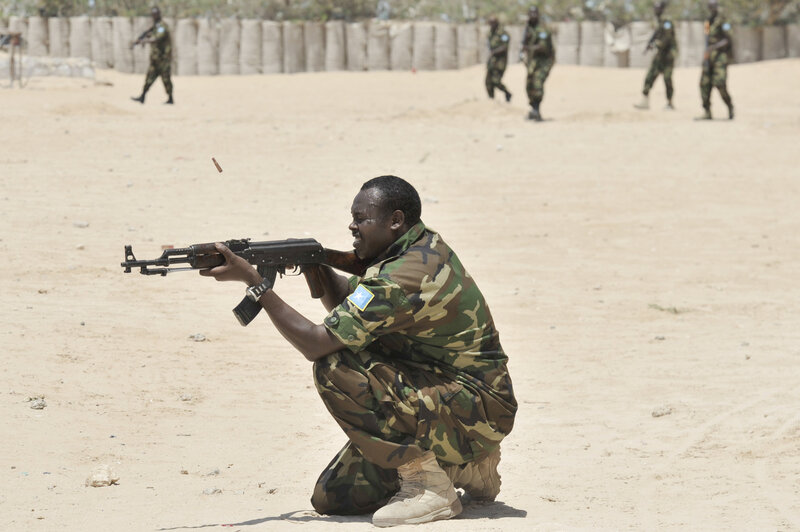 In her remarks to the media, Ms. Filipetto outlined how UNSOS had been established 11 years ago by the UN Security Council to provide logistic support to the African Union Mission in Somalia (AMISOM).

Since then, it had received additional responsibilities, including providing support to the Somali security forces, UNSOM and, more generally, to the UN family and international community.

“Our prime role,” she said, “is to support Somalia’s efforts to achieve peace, stability and development for its people, with a particular focus on our contribution to the security space.”

UNSOS currently supports 11,000 Somali National Army (SNA) troops in the field with logistical support that includes food, fuel, water, defensive construction equipment, tents and communications, as well as medical evacuation from the battlefield. The number of troops may rise by 3,000 this year, including 1,000 police officers.

It provides similar support to close to 20,000 AMISOM military and police personnel, and also handles logistic and administrative support to UNSOM, and, on occasion, supports development and humanitarian partners and the international community.

“If you see a UN plane flying, that’s an UNSOS effort. We maintain and manage all our fleet. The fleet conveys cargo and people around the country,” Ms. Filipetto said.

UNSOS has also constructed sector hubs and other bases for AMISOM around Somalia, as well as UN facilities and offices. It is currently upgrading airstrips in the cities of Baidoa and Belet Weyne, in light of its own use of them but also in the hope that in upgrading those airstrips, commercial operators can also use them to the benefit of Somalis.

The UN official ended her remarks by noting UNSOS’ strong partnerships with Somalia’s Federal Government and Federal Member States, AMISOM and the African Union, and UN operations in the country.

“It’s very much a collaborative effort to heavy-lift all the logistics that’s required for nearly 30,000 troops in the battlefield,” Ms. Filipetto said. “We see ourselves as part of transition; eventually, we hope that there won’t be need for our services, when Somali security forces take over the lead for security they’ll manage this themselves.

For the full transcript of the Press Conference, please click here

Joint Communiqué on The Situation in Somalia (AU, EU, IGAD and UN)

Mogadishu – International partners* are alarmed by public statements made by some officials yesterday suggesting that the closed-door, consultative, ice-breaking meeting of Federal Government and Federal Member State leaders is not making pr

Mogadishu – As Somalis prepare to welcome the Holy Month of Ramadan, international partners* express hope that the basic tenets of reflection, tolerance, forgiveness and reconciliation will usher in a successful summit of the Federal Govern