Dhusamareb – The electoral process, the question of federalism, power sharing arrangements, justice and security, the rights of women and youth, and the status of Mogadishu as the capital of the country were among the issues discussed during three days of constitutional consultations which concluded today in Dhusamareb, Galmudug State of Somalia.

The public meeting was attended by over one hundred people representing youth, women, religious leaders, elders, civil society groups, academics and persons with disabilities, aimed at having their views included in a future constitution for Somalia.

“We want a constitution that asserts the rights of the disabled”, said Abdi Jama Ahmed, who is visually impaired and was speaking on behalf of persons living with disabilities.

“The disabled have no political, financial or even social representation. For example, we have difficulty accessing buildings because most have no wheelchair ramps. The law should address this,” he added.

Said Sirad Bare, Galmudug resident who took part in Somalia’s constitutional referendum in 1979, said the current review campaign was very different to the one taking place that year.

“The difference between then and now is that today’s process is more inclusive. Everyone is encouraged to take part at regional, district and village level and we are all encouraged to freely share our views,” the Mr. Bare said.

“I especially encourage the youth to support and take part in this constitutional review process to get a constitution that will serve their interests and development,” he said. 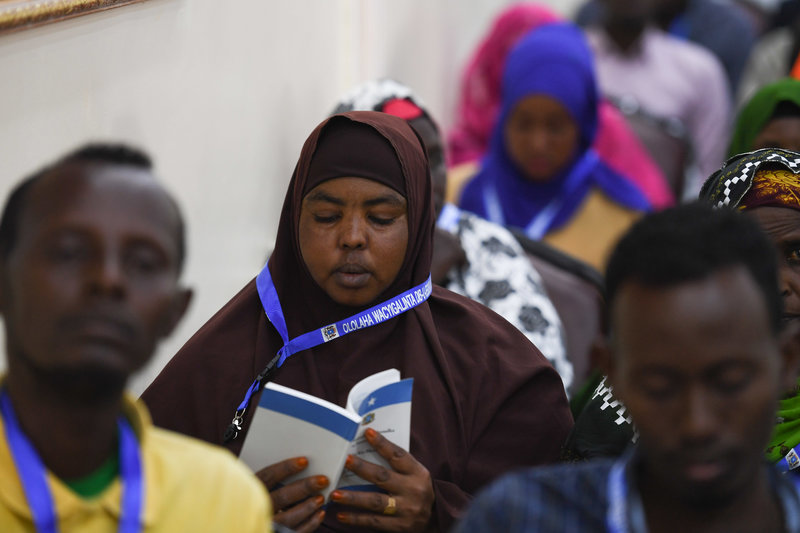 Somalia's constitutional review process was launched in 2018. It aims to replace the current Provisional Constitution, which was adopted in 2012, ahead of the ‘one-person, one-vote’ elections scheduled for 2020/21.

After group discussions, a representative from a women’s organization, Dahabo Adan Mahamud, said she was encouraged to see that the Provisional Constitution has guaranteed the rights of women, especially the provision stating that all citizens regardless of gender, religion, social or economic status have equal rights and duties before the law.

“Since women are among the most vulnerable persons within our society, the constitution is good for us in that it states our rights. It is a big benefit for us to know that the constitution protects our rights as full citizens of the country,” she said.

Speaking at the consultations, the Director-General of Galmudug’s Ministry of Constitutional Affairs, Omar Ahmed Sheikh Adan, urged the state’s residents to take advantage of the inclusive and transparent view process to put their views across.

“The reason why you should take part is because a constitution basically summarises rights and duties. If you do not know what the constitution says, it means that you cannot agitate for your rights. It also means that you will not understand your civic duties. Therefore, it is important to take part so that you get to understand your rights and your duties as citizens”, Mr. Adan.

Organised by the federal Ministry of Constitutional Affairs, with the support of the United Nations Assistance Mission in Somalia, a public outreach campaign on the different consultations across the country has been taking place, aiming to advance the country's constitutional review process, a key milestone in the state-building process of Somalia. Similar public consultations have been held in Hirshabelle and the South West State of Somalia.