Baidoa, 8 March 2020 – Efforts to provide essential services for internally displaced children and youth and breaking down barriers to youth employment anchored a visit to Baidoa today by the United Nations envoy to Somalia, James Swan.

While in the administrative capital of South West State, the UN official was accompanied by the UN Children’s Fund (UNICEF) Representative, Werner Schultink, and visited an Alternative Basic Education programme that is providing vital learning opportunities to the most vulnerable and marginalized children of Somalia in the Hagarkaa iyo Madi Geri camp for internally displaced persons.

“Many of these displaced children would not be able to access schooling without this programme, and some never had the opportunity to go to school before arriving at the camp,” Mr. Swan said about the education programme at a later media encounter.

In Baidoa alone, more than 3,000 children are enrolled in UNICEF-supported Alternative Basic Education schools and by the Ministry of Education and partners. 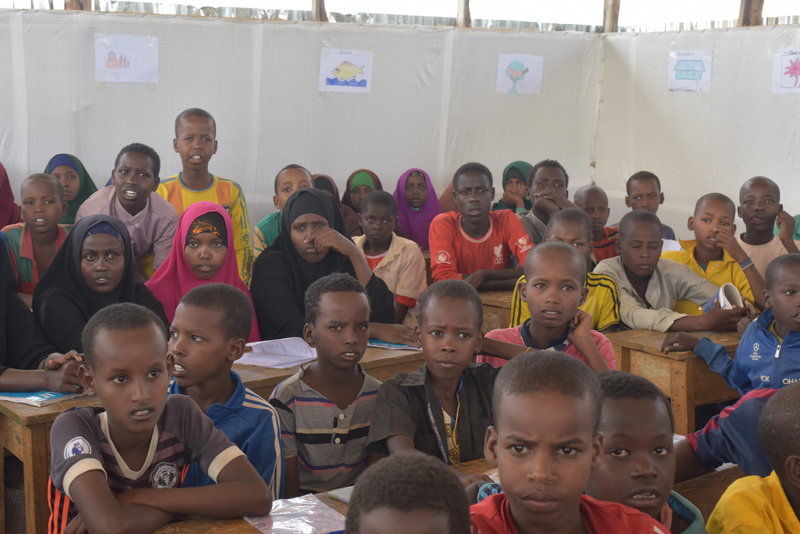 The education programme visit was followed by a tour of a vocational training centre, managed by GRRN, a UNICEF partner, at which 200 young people have been trained in a variety of skills to enter the work-force, such as plumbing, basic electronics, solar panel installations and building of latrines.

“Both young women and young men are learning these skills – breaking down gender barriers and underscoring that women are not limited in what they can do and there are no boundaries,” Mr. Swan said.

The UN envoy also noted that his visit coincided with International Women’s Day, celebrated globally on 8 March with the aim of highlighting women’s empowerment and the need for gender equality, and highlighted South West State’s progress in the area of women’s political participation.

“I congratulate the South West State administration for its efforts to promote women’s empowerment and political representation. This was illustrated during the recent district council formation in Dinsoor. I hope that the Dinsoor model, in which women now hold 10 of 21 seats, can set the standard for other upcoming political processes in Somalia,” he said.

The UN envoy also welcomed the South West State’s efforts to form – as per the state’s constitution – a new regional Assembly that will be properly selected and represent the various South West State communities.  The United Nations has supported this assembly-formation process through training of the state’s Technical Selection Committee.