IFIYE Centre: A beacon of hope for Somali culture and creative arts

IFIYE Centre: A beacon of hope for Somali culture and creative arts

Mogadishu – When he was pursuing his undergraduate studies at the University of Somalia, Mohamed Abdirizak Farah had no facility where he could research and prepare his assignments outside of the university’s own premises.

No public library had existed in the Somali capital for years since the national library suffered extensive damage during the height of the country’s civil war, and that lack of a public reading space led to an idea.

“We wanted to create a space where Somali cultures and arts will flourish and be preserved,” explains the 26-year-old native of Hargeisa.

“We wanted to read books written by Somali intellectuals and critique books that were written about Somalia by foreigners," he adds. ''Then the idea came to us: to create a platform where we can engage the academics and experts in Somali cultures to share their knowledge and experiences.”

That idea gave birth to the IFIYE Centre, which Mr. Farah and a dozen other young Somalis founded in 2013.

Dedicated to the promotion of a culture of reading and creative writing, the centre distributes books on Somali history, fiction, science, poetry and drama. The word ifiye means enlightenment in Somali, and the centre organizes debates, poetry readings, photography exhibitions, lectures and traditional dance performances to improve young Somalis’ understanding of their nation’s culture.

A traditionally oral society that is renowned for its poetry, Somalia’s modern literary heritage is of relatively recent origin. The regime of General Siad Barre introduced a Latin alphabet for the national language in the early 1970s and carried out a nationwide literacy campaign that taught over 500,000 Somalis to read and write.

In 2013, the IFIYE Centre conducted its first literacy campaign for 470 children living in camps for internally displaced persons in Mogadishu. In 2016, the centre opened a public library, and it has drawn an enthusiastic response since its launch.

“We distribute high-quality Somali literature,” says Mr. Farah, who serves as the centre’s executive director. “When we started our reading club, only ten people turned up. Now we have over 200 people.” 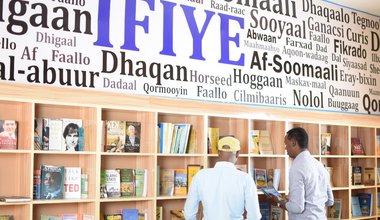 In December 2017 the centre introduced a creative writing competition, Tartan Sheeko, for university and high school students. The contest received submissions from 700 students, and first prize was awarded to a teenaged girl from Hargeisa, who also received a $1,000 honorarium.

Mr. Farah has plans to extend the centre’s operations beyond Mogadishu and mount a literacy campaign in the country’s regional state capitals.

“Somalia needs literacy and cultural preservation centres in every single village, town and city,” he says. “Our long-term plan is to reach the remotest parts of the country, where a literacy campaign is much needed.”