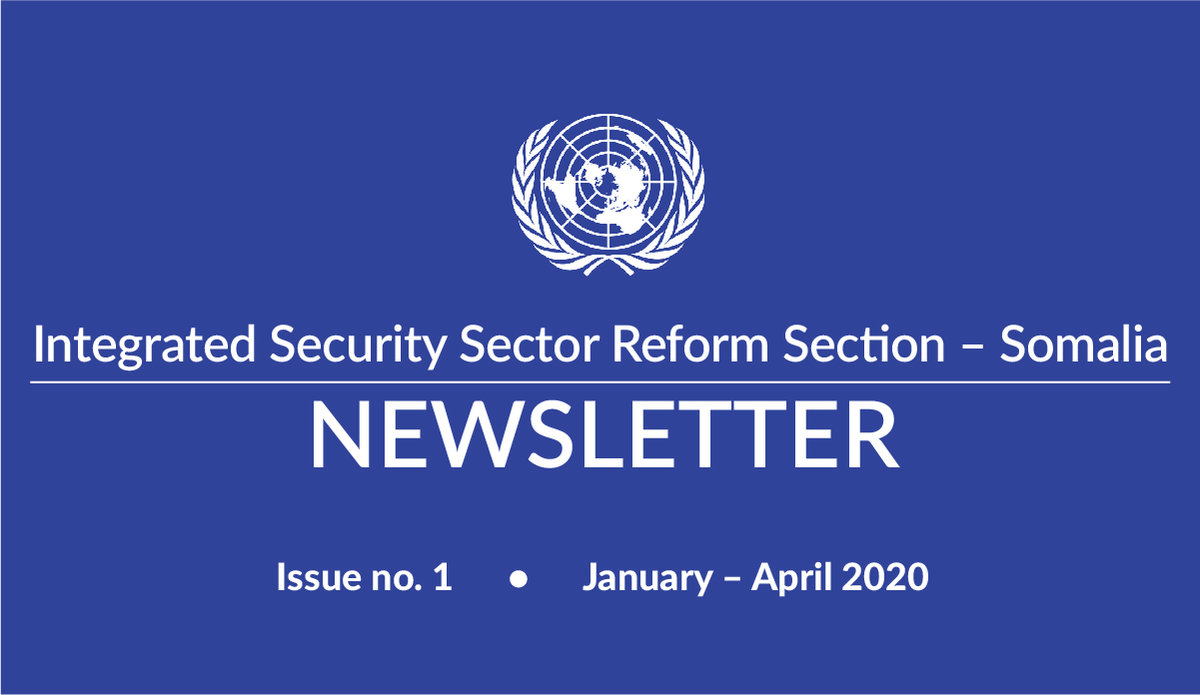 The JSSGP is a 24-month programme supporting the security institutions of the Federal Government of Somalia (FGS) and Federal Member States (FMS) aiming to improve peace, security and safety, while enhancing civilian oversight, all in accordance with the rule of law and human rights.  Read more...

Somalia has the second longest coastline in Africa and is located at the geo-strategic convergence of some of the world’s most important international shipping lanes, thereby offering tremendous possibilities to contribute towards the country’s Blue Economy – the sustainable use of ocean resources. Read more...

A country’s maritime code lays the foundations to harness the potential of waters adjoining a coastal nation. Relevant responsibilities concerning Flag State, Port State and Coastal State duties, including jurisdiction over water columns and its resources, are codified within a maritime code. Read more...

Somalia’s maritime domain provides an excellent platform to promote women´s empowerment and advance their contributions to peacebuilding in the country. Read more...

While the Armed Forces Courts (AFC) judges and prosecutors are experienced police and military officers with a legal education, greater insight into topics such as human rights and gender equality can be gained through UN-facilitated trainings. Read more...

The UN and African Union Mission in Somalia (AMISOM) Security Sector Reform teams have been working together towards advancing security sector governance in Somalia.

The Somalia Joint Security Sector Governance Programme (JSSGP) is a 24-month programme supporting the Federal Government of Somalia (FGS) and Federal Member States (FMS) security institutions to improve peace, security and safety, enhancing civilian oversight and in accordance with the rule of law and human rights. This support is in line with the National Security Architecture and the Roadmap on Security and Justice. 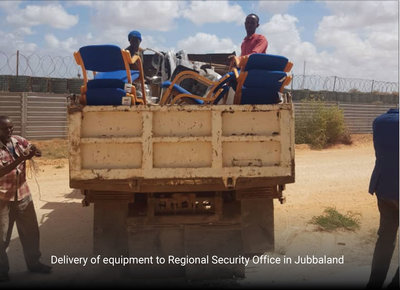 During 2019, the JSSGP was in a start-year with a focus on developing strategy and modalities of support for full implementation of the country-wide comprehensive programme. Whereas the start-up of the JSSGP in 2019 was primarily focused on supporting the FGS ministries, the first quarter of 2020 has seen an increasing focus on developing government institutions in the FMS, such as the Ministries of Security (MOS) and the Regional Security Offices (RSO). The Programme Steering Committee Meeting on 16 December approved the $5M annual work plan for 2020, which provided the green light for full implementation of the Programme that supports 23 government institutions at National and State level.

Many of the security governance institutions in the FMS are newly established, and the JSSGP has therefore supported the recruitment of 68 consultants and advisors (F:13 M:55) who will provide a crucial injection of staff capacity. 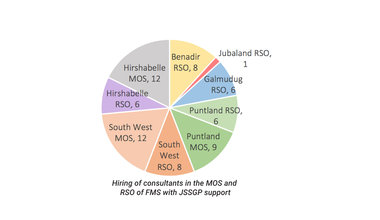 In order to ensure that institutional development is structured, coordinated and well planned, each beneficiary institution is developing an Institutional Development and Capacity Building Plan (ID&CB Plan) that outlines the institution’s structure, and forecasts personnel, training and equipment requirements for the coming years. The core idea is that the ID&CB Plans developed will be drafted and owned by the respective institution, and thus form a living document that fosters a common understanding of how the institution will deliver against its mandated objectives in the years ahead. I-SSR is therefore rolling out a series of workshops to support each FMS institution to develop their individual ID&CB Plan. 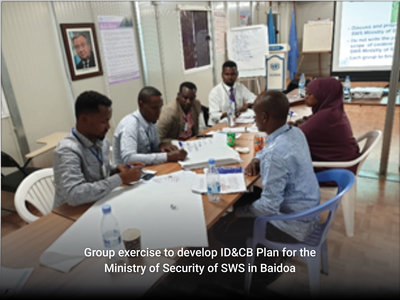 On 12-13 November, a workshop was held in Baidoa for the ‘Ministry of Internal Security’ of South West State, and on 2-3 December in Garowe with the ‘Ministry of Security and DDR’ of Puntland, with both Ministries having now finalized their ID&CB Plans.

This year will see a strong emphasis on capacity development and tailored trainings for all institutions in areas, such as report writing and office management, human rights and gender awareness, and leadership skills for the management cadre. 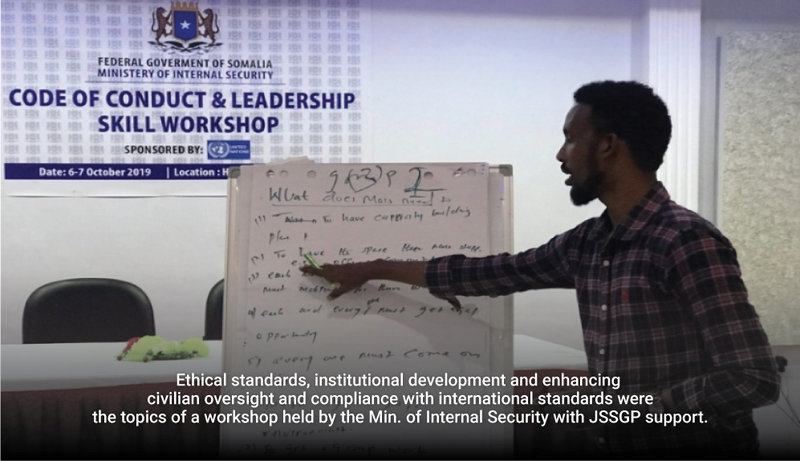 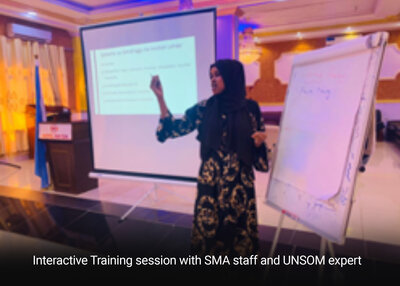 Somalia has the second longest coastline in Africa and is located at the geo-strategic convergence of some of the world’s most important international shipping lanes. As a hub for maritime trade emanating from the Middle East and Asia along the ancient Maritime Silk Route, Somalia’s ports have played host to seafarers over many centuries. Despite experiencing many security and humanitarian challenges, the Federal Government of Somalia, supported by the international community, is making important progress in delivering against the Sustainable Development Goals (SDGs) and the 2030 Agenda. In order to realise this potential, the Ministry of Ports and Marine Transport, re-established the Somali Maritime Administration (SMA) in December 2018 to take forward the necessary policy and regulatory frameworks that will generate opportunities for the shipping industry in Somalia. 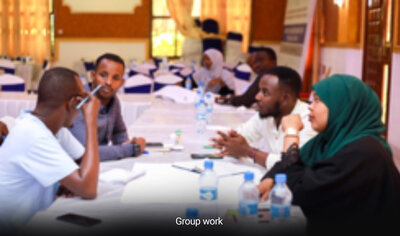 The I-SSR Section and other UN entities, including the International Maritime Organisation (IMO), United Nations Office on Drugs and Crime (UNODC), and World Food Programme (WFP), as well as the European Union Capacity Building Mission in Somalia (EUCAP), are working together to provide collective guidance, training and capacity building initiatives to the SMA.  To this end, International partners facilitated a series of training activities during November and December 2019, which culminated in an Induction Training Workshop in Djibouti from 19–23 January 2020, covering Ship Registration, Crew Certification and operationalization of a Maritime Rescue Coordination Centre (MRCC).

The SMA now has the important skill sets to work towards attaining Initial Operational Capability by mid-2020 and play a key role in contributing to the nation’s Blue Economy– the sustainable use of ocean resources. 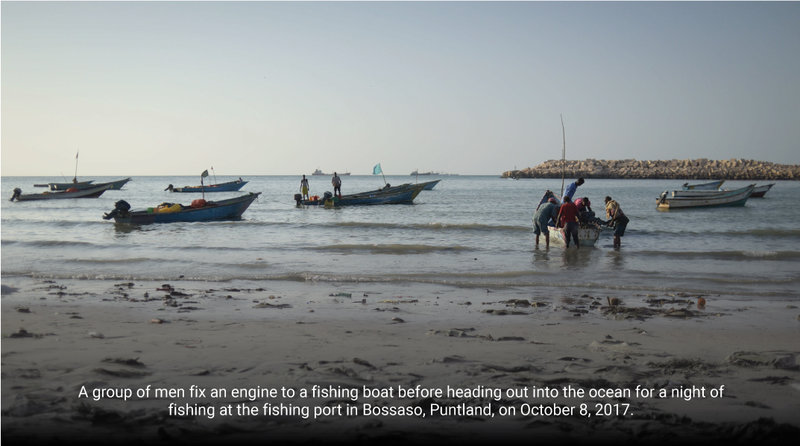 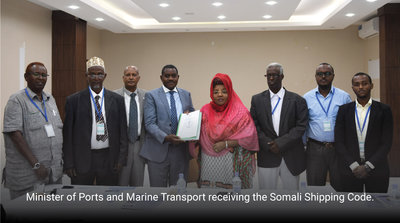 A country’s maritime code lays the framework to establishing a conducive ecosystem to harness the potential of waters adjoining a coastal nation. Relevant responsibilities concerning Flag State, Port State and Coastal State duties, including jurisdiction over water columns and its resources, are codified within a maritime code, which can also serve as an enabler in the development of a country’s ‘Blue Economy’.

On 9 March 2020, several years of work on the development and translation of a revised Code for Somalia through an International Maritime Organization (IMO) project, with the support of UNSOM, came to fruition with the Ministry of Ports and Marine Transport accepting the newly drafted Somali Shipping Code. The formal legislative process will now commence through the Office of the Prime Minister. The event brought together key stake holders, including Members of Parliament, Senators, representatives from IMO, UNSOM, UNODC, WFP and EUCAP. 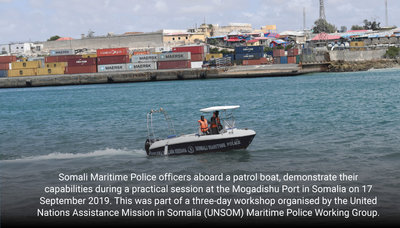 The revised Shipping Code, last amended in 1988, is a significant step forward for Somalia and aims to ensure compliance to latest international maritime frameworks, such as United Nations Convention on Law of the Seas (UNCLOS). The ceremony also witnessed the formal handover of the instruments of accession on international maritime conventions on Safety of Life at Sea (SOLAS) and prevention of marine pollution from ships (MARPOL), by the FGS to IMO. These milestones set the conditions for the establishment of a legislative framework, wherein Somalia can serve as a preferred port of destination and registration of ships, thereby unlocking the potential of Somalia’s ‘Blue Economy’. 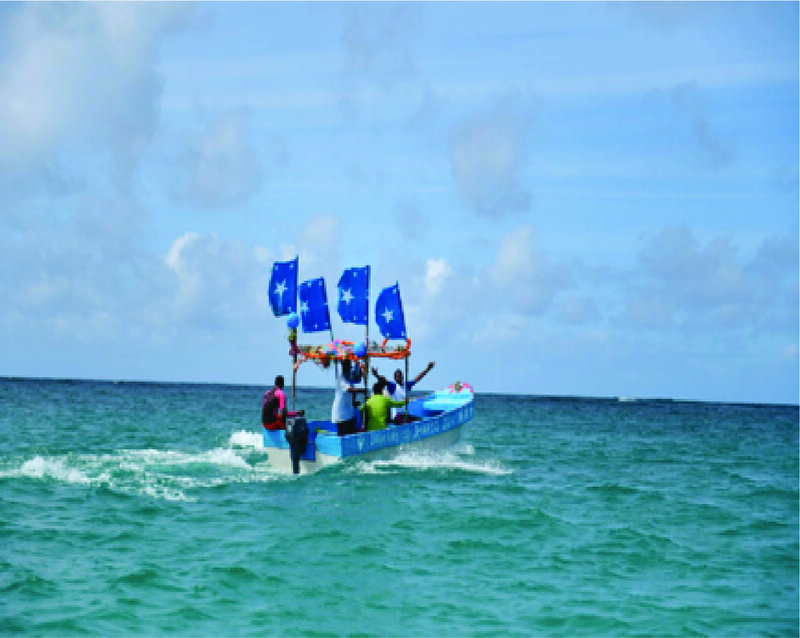 Gender equality and women’s empowerment are at the top of agendas across the world. The same is reflected in the National Development Plan 9 and UNSCR 1325 on Women, Peace and Security (WPS). Having the second longest coastline in Africa, Somalia’s maritime domain provides an excellent platform to promote gender mainstreaming and advance women’s contributions in the peacebuilding initiative of the country.

Recognizing this potential of the maritime domain for women’s empowerment, the Ministry of Ports and Marine Transport (MPMT) and the Ministry of Women and Human Rights Development (MWHRD) in September 2019, with the support of UNSOM and EUCAP, conducted the First Consultative Conference on Women in the Maritime Sector (WiMS) involving Somali women, including from Somaliland. Building on the outcomes of this conference, the WiMS concept has gained momentum and over recent months has brought together eight FGS line ministries, who have consulted and developed a comprehensive Action Plan to empower WiMS. The Action Plan keeps with the rationale behind the 2030 Agenda for Sustainable Development; the Women, Peace and Security Agenda, the Women’s Charter for Somalia (2019), and the National Development Plan 9 (NDP 2020-2024). It includes deliverables such as the inclusion of a Maritime Section in the National Action Plan for the implementation of UNSCR 1325, awareness campaigns to encourage young women to seek careers in the maritime sector, and possible donor support to maritime cooperatives for women and educational programmes. 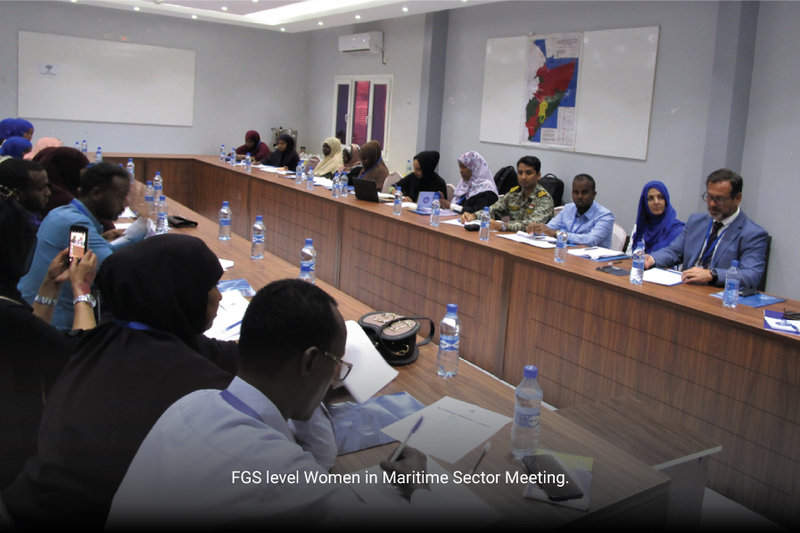 Following these developments, on 12 March 2020 in Mogadishu, UNSOM and EUCAP facilitated a workshop on WiMS Action Plan that brought together representatives from FGS Ministries of Ports and Marine Transport, Labour and Social Affairs, Education Culture and Higher Education, Justice and Judicial Affairs, Women and Human Rights Development, Planning, Fisheries and Marine Resources, and Internal Security. Throughout different sessions, FGS line ministries discussed a broad range of initiatives and cross-cutting issues around challenges and opportunities for WiMS. The workshop was an important step for the FGS to reach ministerial consensus on priorities to be included in the Action Plan to advance WiMS agenda and was seen by participants as a contribution towards the achievement of the Somalia NDP Pillars (2020-2024), as well as SDG5 (gender equality) and SDG16 (peace, justice and strong institutions). The outcomes of this workshop now promise to serve as a catalyst for further deliberations with FMS representatives and international partners in arriving at tangible initiatives that can be supported towards empowering Somali women in the maritime sector. 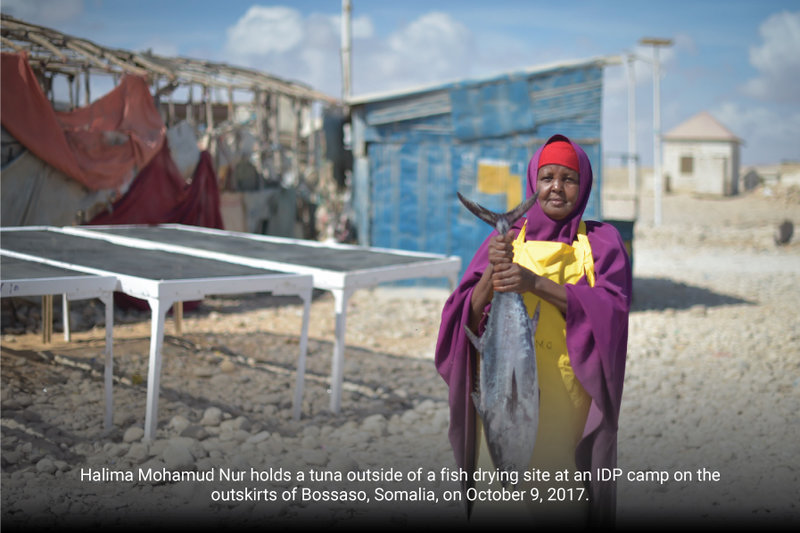 On February 10-11, UNSOM delivered an induction training for new judges and prosecutors of the Armed Forces Courts (AFC). While the AFC judges and prosecutors are experienced police and military officers with a legal education, greater insight into topics such as human rights and gender equality can be gained through UN-facilitated trainings 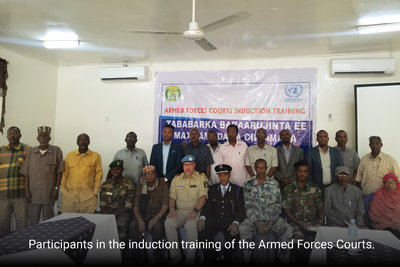 At the start of the two-day training, the Head of the United Nations (UN) office in Hargeisa, Simon Strachan, highlighted the importance of upholding the rule of law, and of having an effective, accountable and transparent judiciary as a prerequisite for the protection of fundamental rights and democracy. For his part, the University of Hargeisa’s Dean of the College of Law, Prof. Mohamoud Hussein Farah, emphasized the principles of equality in rights and obligations before the law among all people, the provision for non-discrimination, and the independence of the judiciary enshrined in the Constitution of Somaliland.

On the second day of the training, human rights specialists from the UN in Hargeisa offered guidance to the judges and prosecutors on their role in upholding human rights and the right to a fair trial. Additionally, the UN Police Adviser in Hargeisa briefed judges on maintaining a gender perspective when deciding cases before them, for instance by identifying and addressing gender stereotypes. The aim was to ensure that judges decide cases based on the principle of equality recognized under international human rights standards, including the Convention on the Elimination of All Forms of Discrimination against Women (CEDAW). 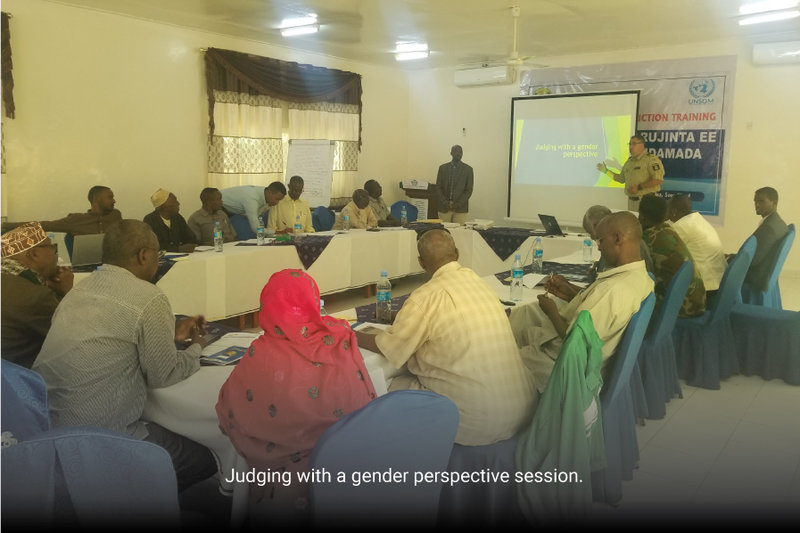 The training is the first in a series of sessions delivered by the UN to the AFC this year. The UN-facilitated sessions are also an opportunity to learn more on the intricacies of military laws, procedures and processes, such as case management and record keeping, and for judges and prosecutors, both in Burao and in Hargeisa, to connect, share experiences and debate how to improve trial procedures. 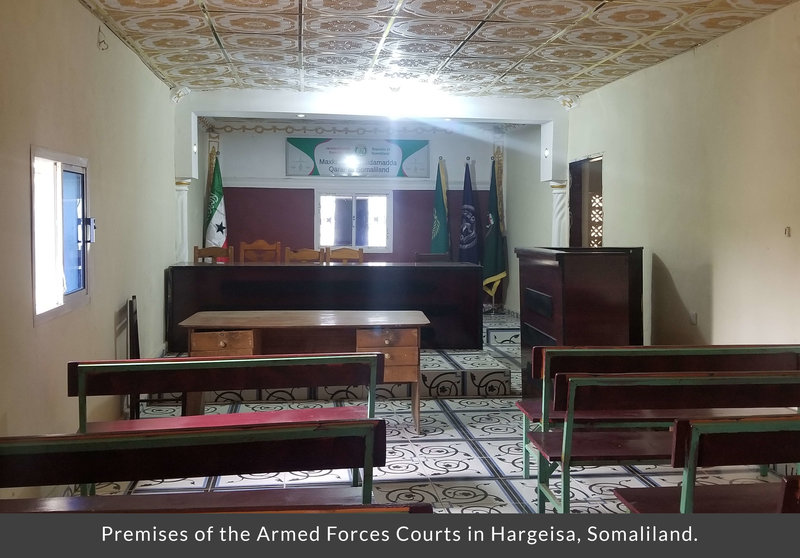 UN and AMISOM strengthen cooperation in SSR efforts in Somalia

The UN and African Union Mission in Somalia (AMISOM) Security Sector Reform teams have been working together towards advancing security sector governance in Somalia. These joint efforts become particularly important as various processes and plans – the National Security Architecture Agreement, the Transition Plan, the National Development Plan 9, and the Security & Justice Roadmap – underline specific milestones on civilian oversight and gender equality – showing the importance of being inclusive in this sector, which also responds to the security needs of women and youth. During the monthly Senior Leadership Committee Forum in December 2019, UNSOM and AMISOM endorsed their Joint SSR Engagement Strategy, paving the way for joint interventions in 2020 with a focus on building the capacity of civil society to ensure sustainable peace and reconciliation efforts in Somalia. This is also in line with Silencing the Guns in Africa by the Year 2020, a flagship African Union initiative calling for greater women’s participation in political processes, and stressing the importance of strong institutions and resilient societies as the keys to advancing peace and security in the continent. 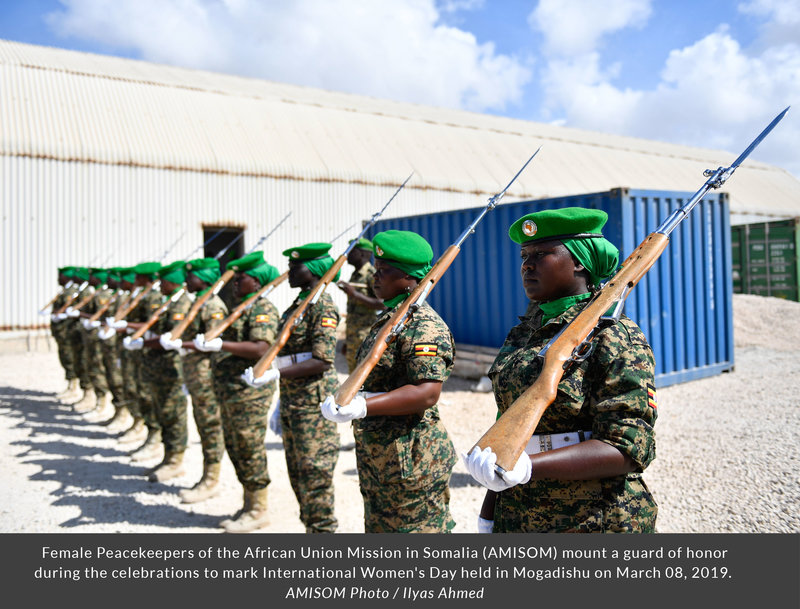