Kismayo – On his first visit to the southern state of Jubaland since his arrival, the new United Nations envoy to Somalia expressed his solidarity with its residents in the wake of last week’s deadly terrorist attack.

“On behalf of the UN team in Somalia I present my deepest condolences to the families of those who lost their lives in the attack and I wish a speedy recovery to the injured. There is no political or ideological justification for such atrocities – the United Nations stands with the people of Jubaland as they deal with this terrible tragedy," the UN Secretary-General’s Special Representative for Somalia, James Swan, said at a media encounter in the state’s capital, Kismayo, on Monday.

"I also share with the people of Jubaland the determination not to let a despicable act of terrorism derail the progress that Jubaland has made towards reconciliation and political stability as a Federal Member State of Somalia,” he added. 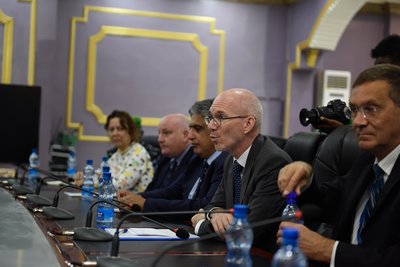 The UN Special Representative had gone to Jubaland to familiarise himself with the socio-economic and political affairs in Jubaland, as well as meet with its top officials. He met with Jubaland’s President Ahmed Mohamed Islam 'Madobe’ and other administrative officials, and their discussions focused on a range of issues that included security, economic development, and governance.

Jubaland state is set to conduct an electoral process in August, with elders selecting members of the regional assembly, who will, in turn, choose the president.

“We deliberated, among other things, the political dispensation in the country, particularly the upcoming Jubaland elections,” President Madobe told the media in a joint media encounter with Mr. Swan after their meeting.

The Jubaland leader noted that the state’s electoral process would take place on time, adding that the regional administration will ensure the exercise is conducted in a secure and peaceful environment.

In his remarks to the media, the UN Special Representative also flagged that the electoral process would enhance prospects for peace, stability, and economic development in Jubaland as well as the rest of the country.

“I underscored the strong views of the international partners that this process must take place without violence, on time, without interference and follow a fair and transparent process,” Mr. Swan noted.

The UN official’s other meetings in Kismayo included encounters with the chairperson of the Jubaland Independent Electoral and Boundaries Commission, Dr. Hamza Abdi Barre, and members of the regional assembly.

The visit came in the wake of a terror attack on a hotel in Kismayo on 12 July, which left at least 26 people dead and many others injured. The attack drew widespread condemnation, including from UN Secretary-General Antonio Guterres and the UN Security Council.

On the visit, Mr. Swan was accompanied by senior officials from the Office of the UN High Commissioner Refugees (UNHCR) and the UN Office for the Coordination of Humanitarian Affairs (OCHA), Takeshi Wayama and Justin Brady, respectively.

The trip was the UN Special Representative’s second visit outside of the capital, Mogadishu. He visited the northern state of Puntland last week, where he reiterated the UN’s support for development programmes and inclusive dialogue between the federal government and the federal member states.

14 Jan 2021
Remarks by UN Secretary-general’s Special Representative for Somalia, James Swan, to the media in Baidoa