Mogadishu – At a gathering with Somali local government officials, a senior United Nations expert highlighted the need for long-lasting and local solutions to the challenges brought about by Somalia’s rapid urbanisation.

The Horn of Africa country is among the fastest urbanising countries in the world, with the return of refugees and internal displacement key drivers of the movement of people from rural to urban areas.

“2.6 million Somalis are internally displaced – that’s an amazing number in absolute terms but also in terms of the overall population. This is a huge humanitarian challenge but it’s also affecting the development of the country and ultimately the security, the state-building,” said Walter Kaelin, a UN Special Advisor on Internal Displacement.

“And unless we find durable solutions for these people I think it will be very difficult for Somalia to advance,” he added.

The UN expert was speaking on the sidelines of the ‘Exchange on Local Solutions to Urban Displacement,’ a gathering of local government officials, civil society representatives and UN experts to discuss the role of local authorities in finding solutions to the country’s urbanisation.

Held in the capital, Mogadishu, those attending included that city’s mayor, as well as those of regional centres such as Baidoa and Bosssaso. 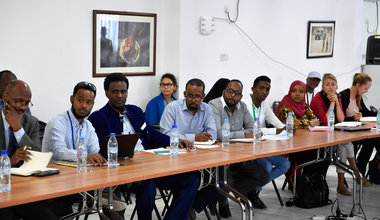 In Somalia, more than a million men, women and children live in protracted displacement in the wake of the country’s conflict, and hundreds of thousands are believed to have been displaced due to drought.

The country’s large population movement has posed new challenges to Somali society, not only to the landscape and social fabric of many towns and cities, but also by putting increased pressure on host communities that themselves struggle with limited available resources.

Areas of concern include the delivery of basic services, the creation of livelihood opportunities, the securing of housing, land and basic property rights and providing protection and access to justice for displaced people.

“It really is about looking at these waves of displacement in the longer-term as part of a trend of urbanization that the country has been experiencing for many years now, and this trend will continue,” said the UN Development Programme’s (UNDP) Country Director for Somalia, George Conway, on the meeting’s sidelines.

“The climate change trajectory of Somalia is such,” he continued, “that we’ll see continued spikes in rural-to-urban migration and the cities have to be prepared and be ready to expand housing opportunities, expand access to basic services and importantly, ensure livelihoods and employment opportunities for these new people that are joining cities.”

To address the longstanding problems of displacement and the issues surrounding it, the Federal Government of Somalia (FGS), the UN and various partners have been involved in the Durable Solutions Initiative, which was launched in 2015. Led by the FGS, the Initiative is a collective framework aligned to the country’s National Development Plan and aims to collectively guide approaches and programming on long-lasting solutions.

An expert on the issue of displacement, Mr. Kaelin serves as an advisor on internally displaced persons to the UN Resident Coordinator for Somalia, the Secretary-General’s Deputy Special Representative for the country, Peter de Clercq.