Abdirahman Mohamud Kulane has an unusual perspective on how his fellow Somalis see the world around them. He believes that people see not only through their eyes, but also through their hearts. And through his heart, he sees a renewed Somalia, a peaceful and evolving society to which he contributes – despite some personal challenges.

“I was born blind. I come from a large family, I have eight siblings who live with my parents. Four of us are blind, and the rest are okay,” says the 21-year-old native of Somalia’s capital, Mogadishu.

Abdirahman recalls vividly a time when he attended school with students with no disabilities. One morning, while on his way to school, he heard the other children chatting about the muddy road they were traversing and how they jumped to avoid soggy patches. He tried to jump too, but fell into the mud.

“The students laughed at me. The bystanders laughed at me too,” Abdirahman remembers. “At that moment I knew I was different. I knew that someone like me is just a stranger to society. I hated everything, and I even dropped out of school.”

He later enrolled in the Al-Nur School for the Blind in Mogadishu to learn Braille and then continued his studies at Al-Rajab Secondary School. Abdirahman will graduate this year, along with 30 other blind students.

“It will be the highest number of graduating blind students. It is a remarkable thing to be proud of,” he adds.

Abdirahman is determined to pursue his education and obtain a degree in international relations, despite the fact that there is currently no university in the country that can fully accommodate the special needs of blind students.

Since July 2016, Abdirahman has worked as a sports journalist at Gool FM, the popular sports radio station in the capital that belongs to the Goobjoog Media Group.

“I love sports. I love talking about it,” he says. “So that led me to becoming a sports journalist.”

Abdirahman knows that journalism is a risky endeavour in Somalia, but he is determined to continue his own sports show that airs five days a week for up to 90 minutes. His work and passion for new technologies keep him connected and engaged.

Online, he stays abreast of developments in the sports world by listening to the audio feed of various sports-oriented websites at home and abroad, and using specialized software that reads aloud the texts of these websites.

“I use my iPhone to produce the program. It has a powerful software that can help blind people or people with other kinds of disabilities. I use it to record and for social media chatting and calls,” says Abdirahman. 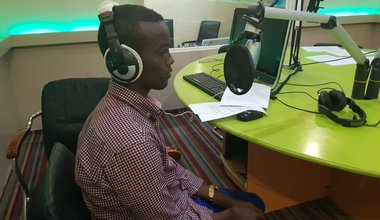 Abdirahman is proud of his independent lifestyle and his achievements with his studies and chosen career. He encourages others to achieve a degree of self-reliance, despite the lack of respect that society can sometimes display towards persons with disabilities.

“I take the tuk-tuk [a three-wheeled motorcycle used as a taxi] whenever I want to go somewhere, even to my job. When I get in, some drivers ask me how I know my destination, and how I send them money through (the mobile money network) EVC Plus. When I do my shopping, people ask me how I know what I’m buying,” says Abdirahman.

“It is sad. The majority of people with disabilities work and study,” he adds. “We deserve respect like any other person.”

Gradually, in Somalia, the rights and needs of persons with disabilities including blind people are being recognized through the work and advocacy of local organizations such as the Somali Association for the Blind.

“Disabled people in general need more support from the government, the international community, and society in general. We need respect,” says Abdirahman.

He adds that persons with disabilities also require quality education and good healthcare. Abdirahman also highlights the need for Somalia to comply with international standards of care for the blind, such as easily accessible walking paths or the provision of special walking sticks.

“In Somalia, we lack that kind of initiative. However, we understand that is probably because of the conflict,” explains Abdirahman.

He welcomes the recent accession by Somalia to the Convention on the Rights of Persons with Disabilities, an international treaty seeking to ensure that the same rights and opportunities will be guaranteed to all citizens. Currently, Somali authorities – which have made the issue of the rights of people with disabilities a key priority – are working on the Convention’s ratification in parliament.

“It is a good thing to sign the Convention. It will be a legal guide for the protection of disabled people in the country,” he says. “But more has to be done for the full protection of people with disabilities.”