Mogadishu, 26 October 2021 – Marking this year’s United Nations Day, the world body’s top officials in Somalia today flagged some of the support being provided to and challenges faced in assisting Somalis on their path to peace and stability, while also re-affirming their commitment in line with the organization’s founding principles.

“The United Nations was created as a vehicle of hope for a world emerging from conflict. And now, 76 years later, it continues to serve the peoples of the world. Some of the challenges it was created to address have not changed, unfortunately: conflict, poverty, hunger. At the same time, new challenges have arisen: COVID-19 and climate change, to name just two examples,” the UN Secretary-General’s Special Representative for Somalia, James Swan, said at a virtual press conference in Mogadishu.

“Here in Somalia,” he continued, “the United Nations has been a steadfast partner of the country since its independence, dating back decades, and we expect the partnership with Somalia to continue across a wide range of areas in the future.”

The senior-most UN official in Somalia was addressing the media two days after UN Day, which is observed annually on 24 October.

In 1945, representatives of 50 countries met in San Franscisco at the UN Conference on International Organization to draw up the UN Charter, which is the founding document of the United Nations.

The UN Charter was signed on 26 June 1945 and came into force on 24 October that year, when it had been ratified by a majority of signatories – and officially bringing the UN into existence. Since its founding, the UN’s mission and work have been guided by the purposes and principles contained in the Charter. 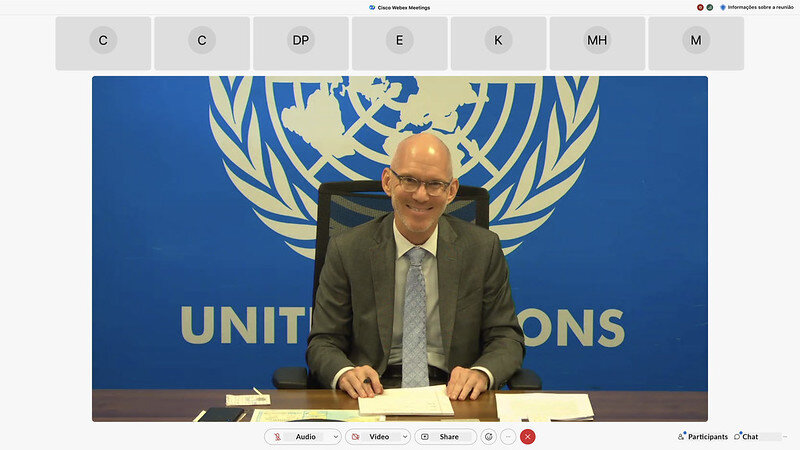 In his opening remarks, the UN Special Representative said the world body’s involvement with the Horn of Africa country includes support for security, state-building, humanitarian needs and development, assistance with local governance, service delivery, human rights, the inclusion of women and youth, and ensuring the representation of minorities and other marginalized groups in political processes and decision-making.

“We hope that will shift focus back to where it is most needed right now: the country's electoral process,” he said, adding that the United Nations also welcomed the near-completion of Somalia’s Upper House elections and urged its leaders to turn quickly to the next phase – the election of the representatives in the Lower House, known as the House of the People.

“We also welcome the efforts to achieve the minimum 30 per cent quota for women's representation in Parliament, while also noting that approximately 26 per cent of the Upper House seats have been filled by women so far,” Mr. Swan added. “We call on all involved to redouble their efforts to achieve the quota in the upcoming House of the People’s elections.” 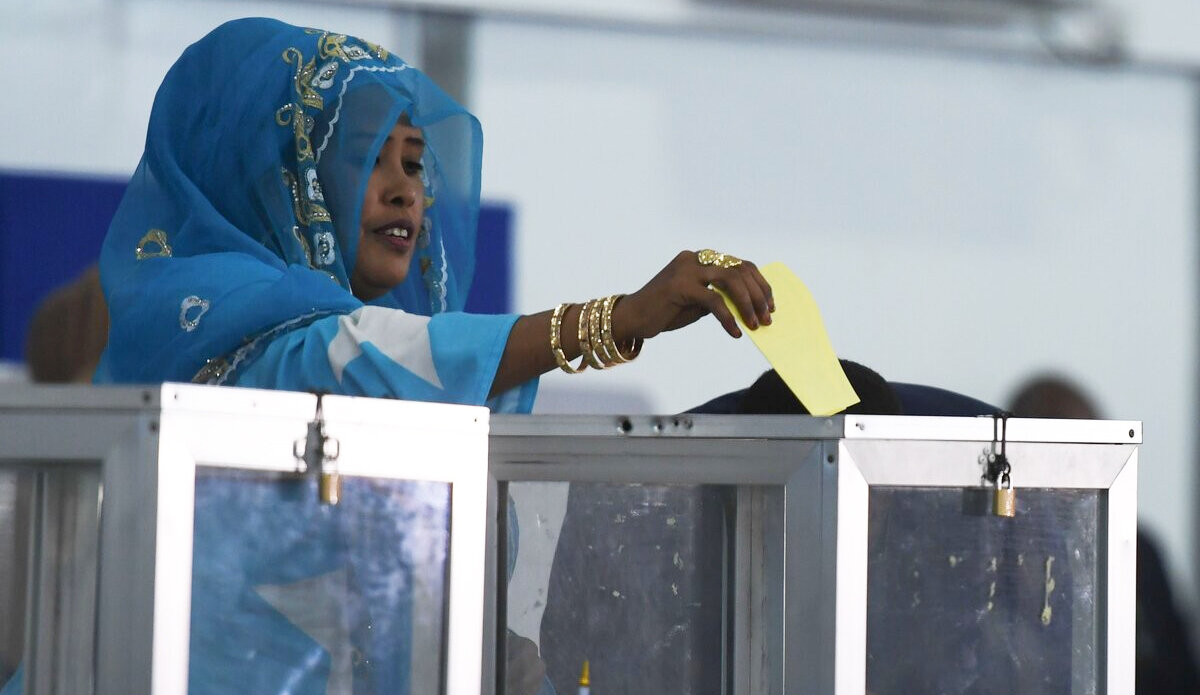 The UN Special Representative also highlighted the recent, direct local elections which took place in three districts in Puntland, and which a team of UN officials attended in a show of solidarity with the people of Puntland as they embarked on this process.

“We are hopeful that, if this process is shown to have been successful, it can offer a model for future elections on a ‘one person, one vote’ basis to be held at local, Federal Member State, and, in the future, national levels, here in Somalia,” Mr. Swan said.

In her remarks, Ms. Filipetto noted how UNSOS – one of the key actors working with Somalia to bring security in line with the national security transition plan – was providing logistical support to 19,600 military, police and civilian staff serving with the African Union Mission in Somalia (AMISOM) and to 13,900 Somali security forces in joint operations with or in coordination with AMISOM.

“UNSOS is not always visible to Somalis, but you may see the UN aviation fleet that is operated by UNSOS. Some of the activities which UNSOS has undertaken, which benefit the country's development, include the upgrade and repair of runways, aviation runways in Baidoa, Jowhar, Belet Weyne and Dhusamareb,” the UN official added.

The UN Special Representative noted how conflict remains the key driver for the displacement of Somalis, but climatic shocks have now become the second leading reason for them to leave their homes.

Somalia has had two consecutive below-average rainfall seasons, and is bracing itself for a third. 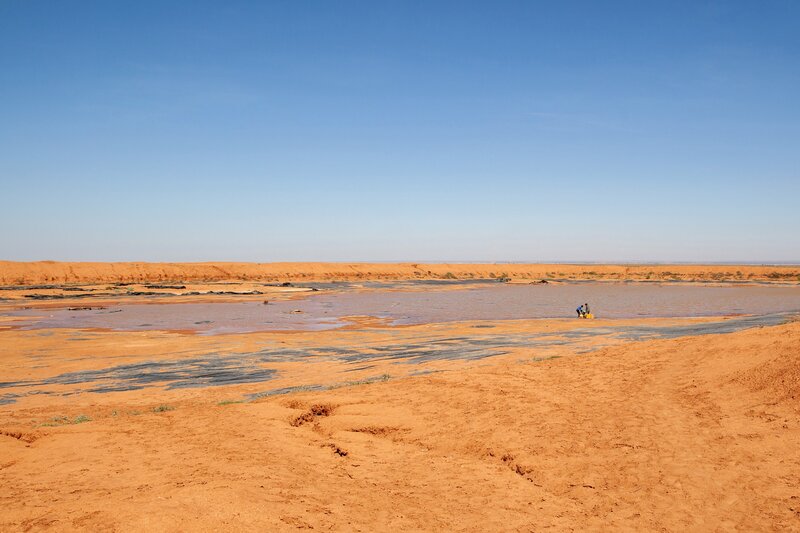 Mr. Ayoya, the acting Humanitarian Coordinator, added that Somalia has one of the largest numbers of internally displaced people – estimated at around 2.9 million, with some 420,000 forced to flee their homes between January and September alone, due to conflict and insecurity.

“The humanitarian needs are vast. Unfortunately, our resources are limited. Humanitarian partners have been racing against the clock to deliver aid and protection to the most vulnerable Somalis,” Mr. Ayoya said.

“The crippling effects of the COVID pandemic, along with other factors, have resulted in severe humanitarian funding shortages for Somalia this year,” he added. “Even now as we speak, we are now nearly at the end of the year and our HRP [Humanitarian Response Plan] is unfortunately only 50 per cent funded.”

Ms. Swan also spoke about the United Nations’ ongoing support for Somalia's development priorities, noting how it was delivered in “a spirit of partnership” and fully aligned with Somalia's National Development Plan and relevant structures.

In late 2020, the Federal Government of Somalia and the United Nations signed a new cooperation agreement – known as the UN Sustainable Development Cooperation Framework (UNCF) – which sets out how the country and the world body will work together over the next five years to achieve peace, stability and prosperity for all Somalis.

The UNCF represents the collective commitment of the Federal Government of Somalia and the United Nations to work together in support of the 2030 Agenda for Sustainable Development and the Sustainable Development Goals (SDGs). The Goals are a universal call to action to end poverty, protect the planet and improve the lives and prospects of everyone everywhere, and were adopted by all UN Member States in 2015 as part of the 2030 Agenda, which sets out a 15-year plan to achieve the SDGs. Referring to Somalia’s development in his remarks, Mr. Mason, the acting Resident Coordinator, said there had been some progress.

“The challenges we inherited in 2020, including the onset of COVID and its devastating effect on the global economy, droughts and flooding, as well as the locust infestation, are, sadly, not yet behind us. According to some projections, as much as 20 per cent of Somalia's population may be directly or indirectly affected by the pandemic,” Mr. Mason said.

“However, according to the World Bank report, the country's economy is expected to rebound from these shocks, with real domestic product projected to grow by about 2.4 per cent this year,” he continued. “Nevertheless, it has some way to go. Somalia's domestic revenue was 13 per cent lower in the first quarter of 2021.”

The acting Resident Coordinator said that, despite these challenges, the UN and its partners had continued to work on achieving sustainable development. He pointed to Somalia’s accession to the UN Convention against Corruption as a “monumental milestone” in the fight against corruption, and to the launch of the National Water Strategy for Somalia as another notable achievement.

“This achievement has set the foundation for sustainable development of water resources in the country. This is particularly important as climate change is increasingly seen as a driver of conflict and requires holistic solutions to prevent disaster,” Mr. Mason said.

“A national task force on droughts and floods has now been launched as well, and will lead nexus-centred interventions to reduce the negative impact of climatic shocks,” the UN official added. “Somalia’s crises are multifaceted, and they therefore require multifaceted, holistic solutions that build resilience against future shocks.”

A full transcript of the press conference is available here and photos here.