Mogadishu – A three-day gathering on a new constitution for Somalia ended today with an assurance from the country’s leader, President Mohamed Abdullahi ‘Farmaajo,’ that the Horn of Africa country will have a new constitution ahead of schedule – before the end of next year.

“We are determined to put to an end the review and finalize Somalia’s constitution by the end of 2018,” the president said, in a message delivered on his behalf by the Speaker of the House of the People, Mohamed Mursal Abdirahman.

Somalia is currently governed by a Provisional Constitution and the promulgation of a new and permanent constitution is expected before the country holds a ‘one-person, one-vote election’ in 2020.

The National Constitutional Convention, which drew more than 350 delegates from all sectors of Somali society, kicks off a review process that will address a number of unresolved constitutional issues, including the future status of Mogadishu and the sharing of powers and resources between the federal government and the Federal Member States.

Though the review timetable expects the new document to be ready by the end of 2019, in his message, President ‘Farmaajo’ said his government is determined to complete the process earlier, in line with an earlier promise to deliver a new constitution before the end of his four-year term. The president took office in 2017.

The country’s leader – currently on a state visit to Qatar – noted that the process of developing new laws to govern the country and replacing the Provisional Constitution, developed in 2012, had taken too long, adding that it was time Somalia had a new political charter. He also highlighted that a new constitution would unite the country, protect the rights of its citizens and help bring about political stability.

Also addressing the closing today, the UN Secretary-General’s Special Representative for Somalia, Michael Keating, praised the Somali government for its efforts in developing a timetable for the new constitution.

“This is a major milestone for Somalia, and I cannot tell you how happy I am to see this day and how proud I am to be the representative of the international community congratulating you on what is happening,” Mr. Keating said. 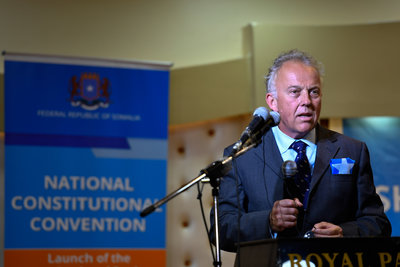 The UN envoy added that a successful review process should be approached in the spirit of unity and reconciliation, adding that he would mobilize financial resources from the international community to add to the $3 million pledged earlier this week by the Federal Government of Somalia to help conclude the process.

“Politically, my colleagues in UN will do their best to provide technical advice and will also do our best to mobilize financial resources,” Mr. Keating said.

Others addressing the gathering included the Minister of Constitutional Affairs, Abdirahman Hosh Jibril, who is leading the review process, and the Vice-Chairperson of the Independent Constitutional Review and Implementation Commission (ICRIC), Mohamed Abdalla Salah.

14 Jan 2021
Remarks by UN Secretary-general’s Special Representative for Somalia, James Swan, to the media in Baidoa