Mogadishu – The Federal Government of Somalia and the United Nations today signed a new cooperation agreement which sets out how the country and the world body will work together over the next five years to achieve peace, stability and prosperity for all Somalis.

The signing ceremony for the agreement – the UN Sustainable Development Cooperation Framework (UNCF) – was held in the capital, Mogadishu, and attended from the government’s side by Deputy Prime Minister Mahdi Mohamed Guled, and the Federal Minister of Planning, Investment and Economic Development, Gamal M. Hassan.

In his remarks at the event, Deputy Prime Minister Gulaid described the document as a significant milestone in the collaboration between the Federal Government and the United Nations, and hailed the latter’s contribution towards the attainment of peace, security, and development in Somalia.

“We have proved that the country has come of age and that the UN is constructively engaging and consulting the government,” he said. “I am happy that the framework document recognizes the leadership of the Federal Government in the prioritization and implementation of the country’s development agenda.”

The UNCF will replace a similar, previous agreement – the UN Strategic Framework (UNSF) – which expires at the end of this year.

“Since signing of the UN Strategic Framework in December 2017, Somalia has made remarkable progress in its journey towards consolidating peace and sustainable and inclusive development, with steadfast UN support,” Mr. Swan said during the ceremony.

The UNCF represents the Federal Government’s and the UN’s collective commitment to support the 2030 Agenda for Sustainable Development and the Sustainable Development Goals (SDGs). The Goals are a universal call to action to end poverty, protect the planet and improve the lives and prospects of everyone everywhere, and were adopted by all UN Member States in 2015 as part of the 2030 Agenda, which sets out a 15-year plan to achieve the SDGs.

In particular, the UNCF outlines ways in which the United Nations intends to support government-owned and government-led priorities. The Framework’s main pillars of activity directly mirror those of Somalia’s ninth National Development Plan (NDP-9), namely, inclusive politics and reconciliation; security and the rule of law; economic development; and social development. 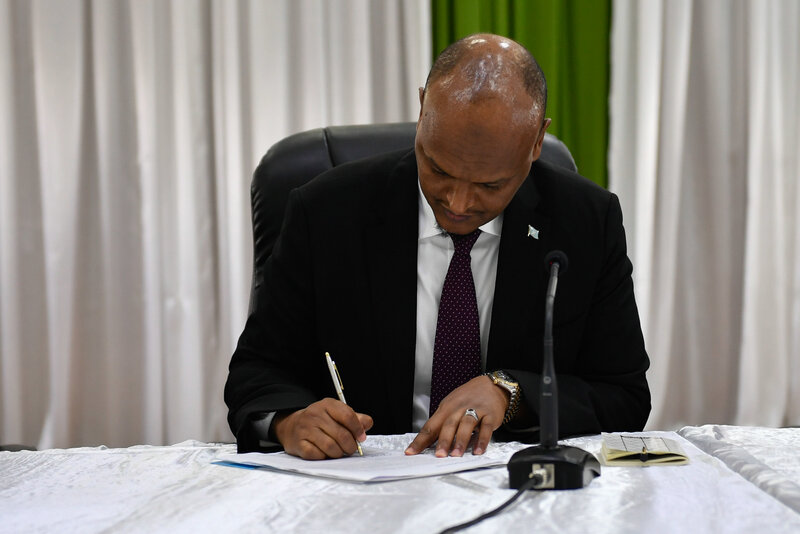 In his remarks at the event, Mr. Abdelmoula said that the UNCF will allow the world body, along with other partners, to better target the structural causes of chronic fragility and instability that have constrained inclusive and sustainable development in Somalia for decades.

“In accordance with the UN’s global commitment to leave no one behind, the cooperation framework aims to ensure that all Somalis particularly the most marginalized and vulnerable, also participate in and benefit from Somalia’s progress,” the UN official said.

The event was attended in-person and virtually by a number of government and UN officials, as well as representatives of the diplomatic community.