Mohamed Ali Farah: ‘If not me, then who?’

Mohamed Ali Farah: ‘If not me, then who?’

Mohamed Ali Farah is passionate about the rights of a disabled people in Somalia – so much so that he has dedicated his life to fighting for their rights and established a non-governmental organization (NGO) to help achieve this.

He also brings a unique perspective to his cause.

“At the age of three, I contracted polio that affected my lower limbs,” the 35-year-old says, noting that the journey to where he is today has not been an easy one.

Born in 1984 in Belet Weyne in the country’s central region, he grew up in the capital, Mogadishu. From a young age, he knew his disability had the capacity to affect his progress and desire for a fulfilling life.

He started school at the age of 14, while his brothers started at the age of seven. He attributes this approach to a commonly-held belief – shared by his parents, among others – that disabled children would be discriminated against or abused by class-mates, leading to them being enrolled late or not at all.

The late start to his education did not deter him, with his academic studies culminating in a Master’s degree in Human Rights and Development from Kampala International University at the age of 34. 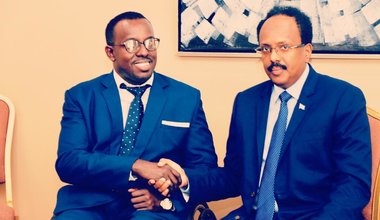 Throughout his studies, his experiences as a disabled person motivated him to want to do something for others like him.

Before joining university, he founded the Somali Disability Empowerment Network (SODEN), an NGO to help persons living with disabilities to build better lives through social integration, human rights advocacy, skill development, and useful representation in all aspects of life. SODEN is a member of the Pan of Africa Human Rights Defenders Network, a network of five African sub-regional organisations, dedicated to the promotion and protection of human rights defenders across the African continent, as well as the Disabled Peoples' International.

“I was motivated to establish SODEN in March 2011 because of the plight of the persons living with disabilities in Somalia – I am one of them,” says Mr. Farah. “I have experience of how it feels to be living with a disability.”

Persons with disabilities in Somalia faces numerous challenges, including discrimination and social barriers that barred them from participating in societal issues.

“We’re sidelined from the rights debate, and we don’t have says in political and economic decision making of the country. I know the country is recovering from protracted conflicts, and that doesn’t mean the government should not prioritize the rights of disabled people. We should have equal opportunities like any other Somalis,” says Mr. Farah, who also serves as SODEN’s Chief Executive Officer. 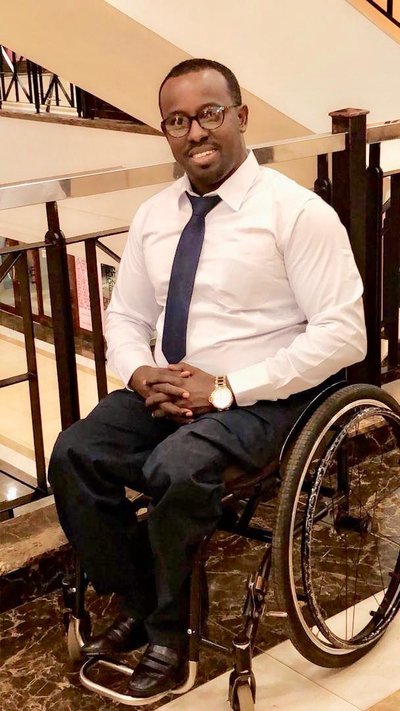 Like other members of the country’s civil society, the activist welcomes the Federal Government of Somalia’s (FGS) ratification of the Convention on the Rights of Persons with Disabilities (CRPD) in January this year.

It takes to a new height the movement from viewing persons with disabilities as “objects” of charity, medical treatment and social protection towards viewing persons with disabilities as “subjects” with rights, who are capable of claiming those rights and making decisions for their lives based on their free and informed consent as well as being active members of society.

Mr. Farah also welcomes the approval by both houses of Somalia’s parliament of a bill to establish a National Disability Agency, which the country’s president signed into law in December 2018.

“Once the agency is established, it will promote and improve the current situation of persons with disabilities,” he explains. “It is a great move to protect and respect the rights of people with disabilities.

The government and the international community must pay attention to how CRPD is implemented. Thought should also be given on how to address poverty and discriminations faces by disable people.”

“I encourage the government and international organizations to have more collaboration with and financially support organizations that deal with the rights of the persons living with disabilities – by doing that, I think the morale of disabled people will be uplifted,” he says. “More importantly, their right to participate in politics and social spheres should be promoted, protected and respected.”