The event brought together 29 women and 137 men to a venue in the Somali capital of Mogadishu for a graduation ceremony from the University for Peace, a tertiary education institution established by the United Nations General Assembly some four decades ago.

“Education transforms lives and, as such, is a foundational pillar of the United Nations mission to build peace, eradicate poverty, and drive sustainable development. Education, whether formal or informal, empowers and enables. It drives upward socio-economic mobility, it is the most efficient leveller, and, perhaps most important of all, education provides opportunities for its recipients to meaningfully contribute towards nation-building,” the UN Secretary-General’s Deputy Special Representative for Somalia, Anita Kiki Gbeho, said in her remarks to the graduating students. 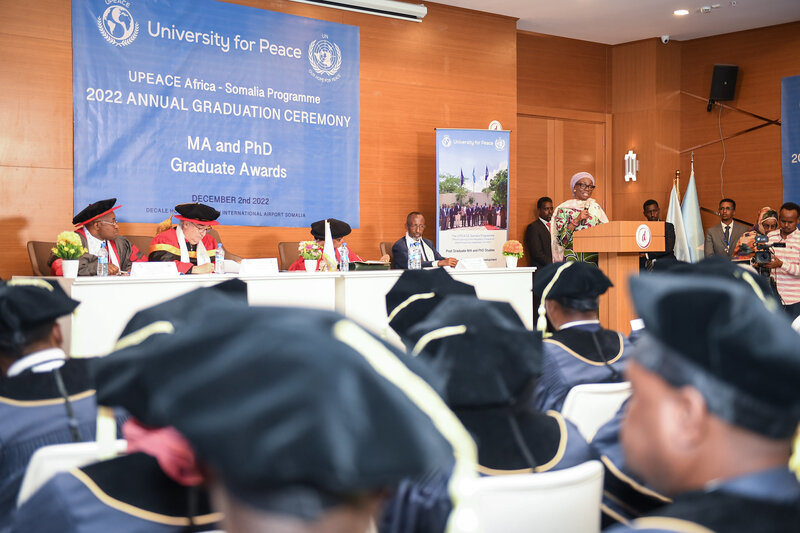 “I can think of few places where the fruits of education are more relevant, more impactful, than in Somalia,” added Ms. Gbeho, who also currently serves as the Head of the UN Assistance Mission in Somalia (UNSOM).

Other senior officials and dignitaries attending the graduation on Friday included Somalia’s State Minister of Education, Farah Sheikh Abdulkadir; the Special Representative of the Chairperson of the African Union Commission (SRCC) for Somalia, Ambassador Mohamed El-Amine Souef, who also serves as the Head of the African Union Transition Mission in Somalia (ATMIS); and other representatives from the international community in Somalia. 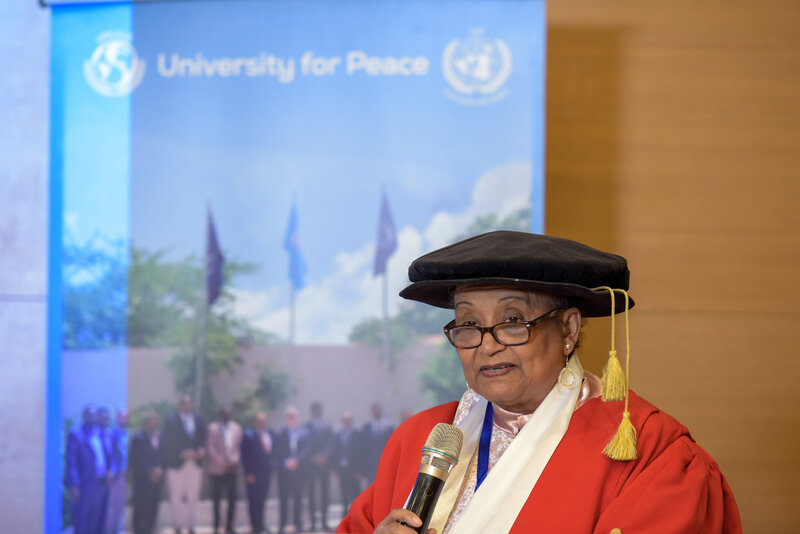 Presiding over the ceremony was a member of the university’s Council, Lalla Ben Barka.

“The attainment of a Master’s or Doctorate degree in a prestigious global higher education institute such as UPEACE [University for Peace] is an event to be celebrated, especially within Somalia’s context as [the country] often faces obstacles such as conflict, terrorism and numerous other challenges,” said Ms. Barka.

“Changing the world through the weapon of education is about [using] the power of education to bring light rather than destruction,” she continued. “I will refer to the importance of education in the context of Somalia by quoting the former United Nations Secretary-General Kofi Annan, who said that education is peacebuilding by another name.”

According to University for Peace’s Professor Samuel Kale Ewusi, who specialises in peace studies and international relations and serves as the director of its Africa Regional Programme, it was by design that the university was had operations in Somalia and that the first Doctorate of Philosophy (PhD) graduates of its programme in Africa were all from Somalia. 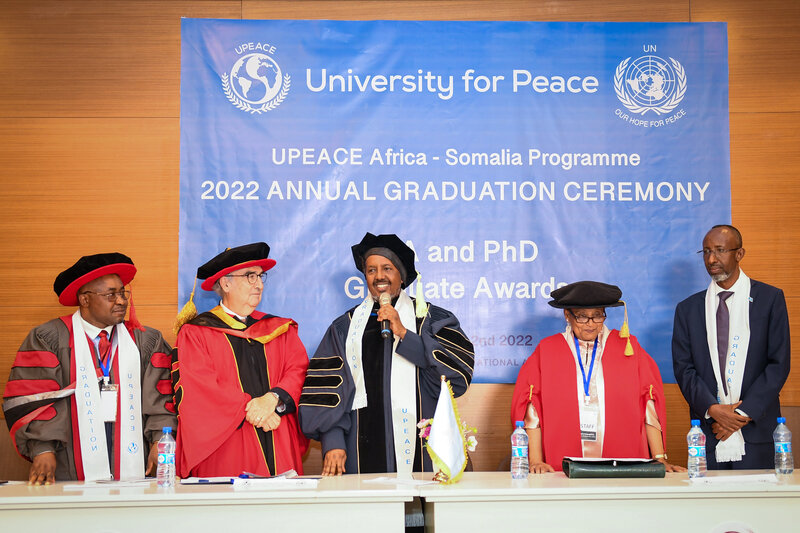 One of the event’s new degree holders, Somalia’s President Hassan Sheikh Mohamud, took the opportunity to address his fellow graduates and highlight the importance that education can have on their country’s future development.

“Somalia does not lack skills. We have enough qualified people now, thanks to the University for Peace, and we are getting more and more every day. Today, we have graduates who could not even dream at all of graduating inside Somalia in specific subjects like environmental science and peace and security. This is a new variable,” said President Mohamud.

"The day I started going to school in the 1960s until today – this was a very long journey, but it ended successfully as I reached the destination,” he noted. “That demonstrates everybody can reach it. If I did, anyone younger than me who has got more time than I do, can do it."

To assist and encourage other students considering applying for the university’s doctoral programme, President Mohamud pledged to create a scholarship fund to support the first 100 students willing to pursue doctoral degrees at the university. 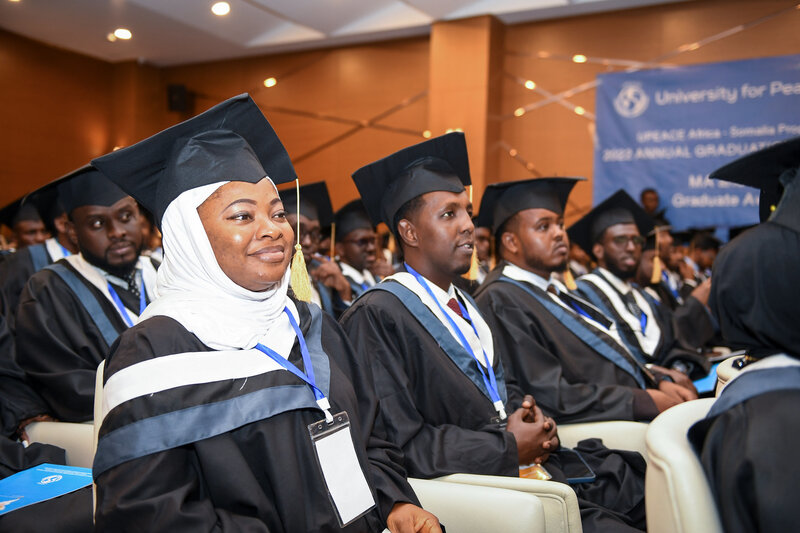 The country’s leader was conferred with a PhD focused on peace, governance and development. He noted that, in August this year, he had defended his dissertation, which was titled, ‘Examining the Challenges of Clan Politics in State-building: A Case Study of Somalia.’

The graduation ceremony was the University of Peace’s second such event for students in its specialised Somalia programme. The first cohort of students took part in a graduation event in 2021.

According to the university, in recognition of the social and economic difficulties that female and other students in Somalia can face in paying for education, its tuition fees for Somali students are the lowest of all its programmes worldwide, while still maintaining academic standards. It also provides substantial waivers and for certain students it covers some costs. 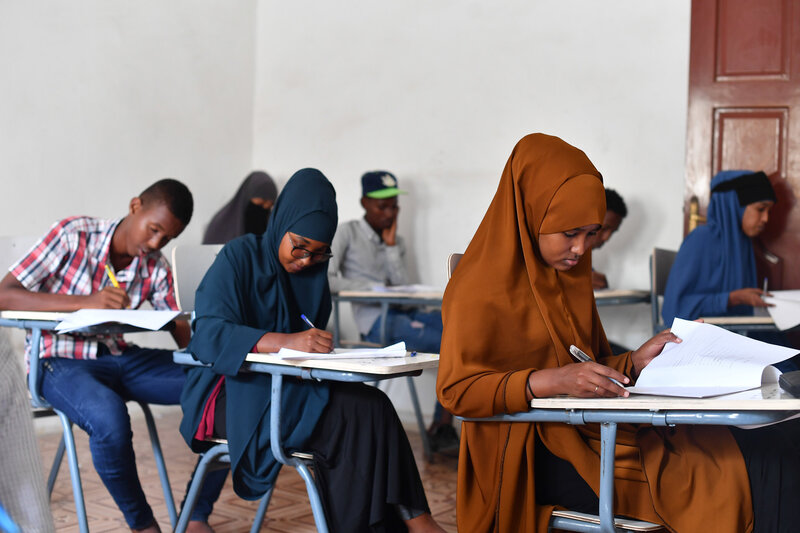 Somalia's ninth National Development Plan, covering the 2020-24 period, lists education as a key sector that is vital for the country's prosperity and progress.

The United Nations in Somalia has been supporting the Federal Government in the education sector for a number of years. This includes the completion of an Education Sector Strategic Plan, the launch of a new education curriculum for primary schools across the country, the conduct of national examinations across Somalia, and the successful completion of the Joint Review of the Education Sector in Mogadishu.

The world body is also heavily engaged in supporting the achievement of the Sustainable Development Goals (SDGs). The fourth SDG is centred on education, with the premise being that when people are able to get quality education they can break from the cycle of poverty. This in turn reduces inequalities, enabling upward socioeconomic mobility and helping to reach gender equality.