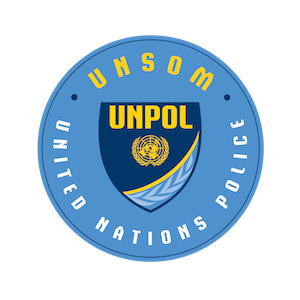 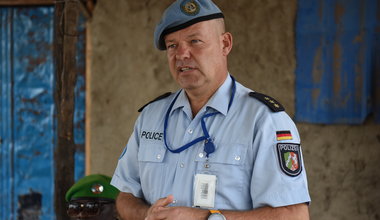 “UNSOM Police is supporting the Federal and State Police services and their respective line ministers as well as the various coordination bodies in the field of policing organized by the Ministry of Internal Security of the Federal Government of Somalia. The Somali authorities responsible for policing are working hard on the implementation of Somalia’s New Policing Model in line with the execution of the Transition Plan, the planning for election security, the integration of regional forces into Somali security institutions and the deepening of federalism as such. The UNSOM Police team is proud to be rated as partner while designing these multiple processes.”

UNSOM Police provides strategic advice to the Somali government at the federal and state serve the Somali people and uphold the rule of law in order to establish and strengthen capable, accountable and rights based police services. UNSOM Police also coordinates closely with AMISOM, the UN country team and international partners and donors on policing issues.

UNSOM Police is led by the Police Commissioner, Meinolf Schlotmann (Germany), and has an authorized strength of 19 staff. The UN police officers in UNSOM are deployed in Mogadishu and in the Somali Federal Member States of HirShabelle, Jubaland, Puntland ,South West State and Somaliland. As of 1 April 2019, 16 seconded police officers from nine UN Member States – Finland, Germany, Ghana, Malawi, Nepal, Philippines and Sweden, Switzerland and Zimbabwe – are deployed to UNSOM. 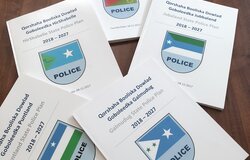 UNSOM Police is supporting the implementation of the New Policing Model both at the federal and member state levels based on the political agreement at the 2016 National Leadership Forum. The agreement was renewed by the Government on 16 April 2017 and endorsed by the Security Pact at the London Conference on Somalia on 11 May 2017. The New Policing Model provides an organizational structure of policing at and member state level that will report to their respective federal and state-level ministries responsible for policing. Each ministry will be responsible for recruitment and training of police personnel based on principles, standards and requirements, agreed collectively.

Technical Committees which oversee the implementation of the New Policing Model are operating in Galmudug, HirShabelle, Jubaland, Puntland and South West State. The Technical committees include representatives from the respective ministry responsible for policing and its State Police High Command. The Committees developed State Police Plans which were endorsed by the National Security Council on 3 December 2017. Prioritized projects emerging from these plans will be presented to the international community to seek adequate support. 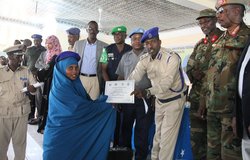 UNSOM Police provided mentoring and monitoring activities the recently launched joint patrol program and initiated a joint patrol training for 200 Police officers from Galmudug and Puntland as well as support to the Gaalkacyo Ceasefire Team Advisory Group in the disputed northern city.

Police officers from the UN Standing Police Capacity were deployed to the area to cooperate with AMISOM on the training of joint patrol units consisting of security service personnel from both member state governments, which has helped to uphold the ceasefire.

Further training initiatives such as on Community Policing under the umbrella of the Joint Rule of Law and on security equipment efforts are in progress to strengthen the operational capacity of Community Policing aiming to foster the promotion of safety and security for the people of Gaalkayco. 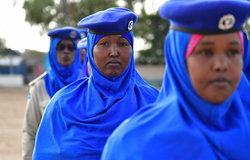 UNSOM Police works in close cooperation with UNSOM’s women and child protection units, all UN agencies and the Somali Police to provide a coordinated multi-sectoral approach to prevent and investigate sexual and gender-based violence, conflict-related sexual violence and violence against children. The close cooperation aims to enhance and improve the status of the victim and the quality of . Awareness raising and supporting women to be recruited for the Somali Police are measures that are already being taken in this regard.

In December 2015, the UN convened a workshop to establish pilot gender-responsive community-policing units. Trainings focusing on the collection of evidence in cases of sexual and gender-based violence and interview techniques required to obtain critical information from victims and witnesses have been provided to the Somali Police.

UNSOM Police has a designated focal point for sexual and gender-based violence and for mainstreaming gender perspectives in the Somali security services.

UNSOM Police is working together with the AMISOM Police component to train and mentor the Somali Police. Trainings have been provided on international human rights principles to ensure the Somali Police upholds its responsibility to protect civilians. The themes of these trainings include Protection of Internally Displaced Persons, Protection of Children in armed conflicts, Human Rights in Police Search and Seizure and Human Rights in Detention.

UNSOM police is collocated within the AMISOM Headquarters in Mogadishu to strengthen the cooperation and support between the African Union (AMISOM) and United Nations (UNSOM) operations. The at headquarters level is mirrored in the Federal Member States, where AMISOM Police maintains a close cooperation with the international police officers deployed both organizations. 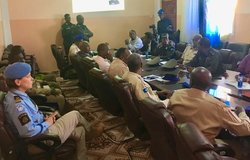 The Sub-Working Group Police under the strand 2b of the security coordination mechanism known as Security replaces the former Police Working Group as a high level strategic platform established for the Somali Police Services and the international community. UNSOM Police is supporting the federal Ministry of Internal Security, the Somali Police Force and the German Embassy, which co-chair this group. The body links the internal Somali Police Joint Management Structure, comprising the Joint Technical Committee, the Council of Police Commissioner and the Conference of Ministers of (Internal) Security with those foreign countries supporting Somali Police development. 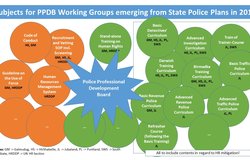 In 2017, the standardized police curriculum and a respective train-the-trainer program was approved by the federal and the Somali Federal Member States police organizations and provides the basis for common training standards in Somalia for police recruits. Based on the Police Plans developed or pending to be developed at federal and state level under the umbrella of the New Policing Model, subsequent training programs and policies require major attention in 2018.

UNSOM Police is implementing the United Nations Human Rights Due Diligence Policy by aiding in the risk assessments of various non-UN security forces/services. Mitigation measures in line with this Policy are incorporated into the implementation process of the New Policing Model.

The United Nations ensures gender-sensitive policing throughout the work of its Police as an operational necessity to address the differentiated security needs of women, men, girls and boys. In addition, female police officers act as role models for gender equality, inspiring women and girls to advocate for their own rights and pursue careers in law enforcement. Female police officers, moreover, provide a greater sense of security women and children and improve access and support law enforcement agencies to local women.

2101 (2013) UNSOM is mandated to help build the capacity of the Federal Government of Somalia to promote respect for human rights and empowerment and to prevent conflict related gender-based violence, including through the provision of Gender Advisors.