The UN Under-Secretary-General for Political Affairs Rosemary DiCarlo concluded a day-long visit to Somalia today, her first field trip since her appointment to the position one month ago.

Ms. DiCarlo’s visit to Somalia is part of a regional tour of three countries in the East Africa.

The Under-Secretary-General met with Federal President Mohamed Abdullahi Mohamed Farmaajo and senior federal government officials at the Presidential Villa in the Somali capital, and they reviewed the political, security and economic situation in the country.

“I wanted to come to show how important Somalia is to the United Nations. It’s a high priority for the Secretary-General and for me,” she said in an interview after meeting with the President.

Ms. DiCarlo expressed satisfaction with the progress the country has achieved on the political and security fronts and noted recent efforts to expedite the constitutional review process.

“I had a very good discussion with the President, and it is very clear Somalia has made a great deal of progress over the last decade,” Ms. DiCarlo stated, adding that she had assured the President of the UN’s continued support to Somalia.

The Under-Secretary-General also met with senior UN officials and staff and held discussions with the senior leadership of the African Union Mission in Somalia. 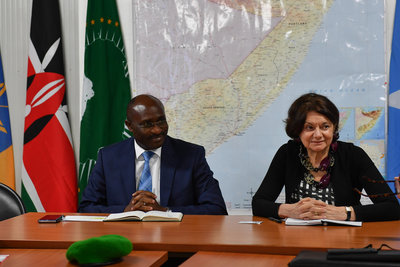 On arrival in Mogadishu this morning, she was received by the Special Representative of the UN Secretary-General for Somalia, Michael Keating, and the Federal Deputy Foreign Affairs Minister Mukhtar Mahat Daud.

Ms. DiCarlo visited Nairobi earlier this week and met with senior officials of the Kenyan government. At the conclusion of her visit to Mogadishu, she left for the Ethiopian capital of Addis Ababa, where she will hold discussions with the leadership of the African Union.