Mogadishu –  A Joint Policing Programme (JPP) that supports the two-tier policing structure and sets the next stage in the development of strong national and state-level police services has been unveiled by the Federal Government of Somalia in close cooperation with the Federal Member States, the UN and other international partners.

The programme will be introduced in five Federal Member States, the Benadir region and to the future Federal Police to support the implementation of priority police projects, as outlined in the Federal and State Police plans and the country’s National Security Architecture that was endorsed by Somalia’s political leaders in April 2017.

Spearheaded by the Federal Ministry of Internal Security, the programme is also expected to expedite the ongoing transition of security responsibilities from the African Union Mission in Somalia (AMISOM) to Somalia’s security forces.

“The structure demonstrates the best way to coordinate policing so that we form an effective policing system in Somalia,” said the Federal Minister of Internal Security, Mohamed Abukar Islow Duale. “This investment in the Somali Police is an excellent opportunity for rebuilding Somalia and the development of peace and security.”

Building on the dividends of the Joint Rule of Law Programme, the JPP will oversee the procurement of equipment, recruitment and in-service training; the payment of stipends for personnel and the development of a legal framework and accountability; and construction projects for federal and state-level police agencies. Key implementing partners of the JPP include the United Nations Office for Project Services (UNOPS) and the United Nations Development Programme (UNDP).

“The future role of the police in stabilisation, in the holding of and building in areas that are recovered from Al-Shabaab, cannot be overestimated,” noted Peter de Clercq, the Deputy UN Special Representative for Somalia. 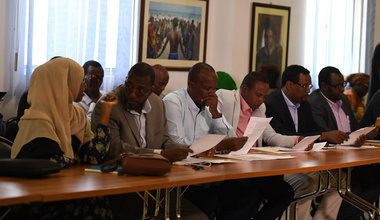 The JPP will rely on support from Somalia’s international partners to implement the country’s New Policing Model and strengthen the capacities and skills of the country’s law enforcement agencies in order to perform their duties more effectively.

Adopted by Somalia’s political leadership in 2016, the New Policing Model was presented at last year’s London Conference on Somalia as a key pillar of the country’s National Security Architecture.

“It is essential to have a police that is responsible for their actions, based on the core universal principles of legality, necessity, professionalism and responsibility,” said Gen. Bashir Abdi Mohamed, the Somali Police Force Commissioner.

The programme has already received commitments from the United Kingdom and the European Union to donate $42 million while Germany is promising additional pledges.

The Deputy UN Special Representative for Somalia Raisedon Zenenga stressed the importance of national ownership and leadership in the upcoming implementation of the JPP. The programme will play a critical role in strengthening the rule of law particularly the justice chain – police, justice and corrections – which is key to building a more secure and just Somalia.