Garowe – The top United Nations official for Somalia today called for greater involvement of women in dealing with the country’s challenges on various fronts, including its efforts to bring about peace and stability.

“It is very obvious that Somalia’s problems are not going to be solved unless women are at the front and centre and that includes everything from health and education, to supporting families, through to business and the economy – but also security and, especially, conflict resolution,” the Secretary-General’s Special Representative for Somalia, Michael Keating, said today, at a women’s peace forum in Garowe, the capital of Puntland state in the country’s north.

Organized by the Somali National Women’s Organization, the forum was one in a series of consultations taking place around Somalia, which will feed into a national conference on peace and mediation, aiming to help prevent violent extremism and promote reconciliation.

In 2000, the world body recognized the role that women can play in peace and security with the UN Security Council’s adoption of resolution 1325, which reaffirmed the important role of women in the prevention and resolution of conflicts, peace negotiations, peace-building, peacekeeping, humanitarian response and in post-conflict reconstruction.

While in Garowe, the UN envoy, who also heads the UN Assistance Mission in Somalia (UNSOM), also met with a group of Puntland's traditional elders and leaders, who have played a key role in resolving conflicts through their respected role in local governance and security issues.

A dispute arose earlier this year between Puntland and neighbouring ‘Somaliland’ for control of the town of Tukaraq, claimed by both sides, and which the elders could assist in resolving, according to Mr. Keating.

“In Tukaraq, there is a need to prevent violence and find a political solution that involves the people in the region on decisions about their own future, something on which the UN is willing to assist,” he noted. 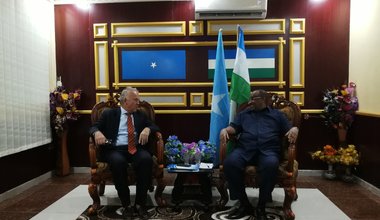 Earlier, the UN official met with Puntland’s President Abdiweli Mohamed Ali. Their discussions included the peace-building support that the UN can provide, in partnership with other international actors, to resolve the Tukaraq conflict.

They also discussed the recent visit by the Special Representative to the city of Galkayo, which straddles the border between Puntland's shared border with the adjoining state of Galmudug. The city had been plagued by armed violence, and efforts to end the conflict there led to the establishment of a joint peace committee, which has been key in local reconciliation and peacebuilding efforts.