Garowe – Like many other countries, Somalia is battling the coronavirus (COVID-19) global health emergency, with its first reported case announced in mid-March.

However, unlike many other countries, Somalia has some additional challenges in its battle – a key one of these is poverty. Its impact is felt at the most basic level of the response; for example, when the first case of COVID-19 was announced the price of hand sanitizers rose dramatically, placing it beyond the reach of the poor and vulnerable communities.

The issue drew the attention of two medical staff at the Puntland State University (PSU), located in Puntland’s capital of Garowe – and, with the aid of some of their students, led to their invention of a low-cost hand sanitizer in early April. 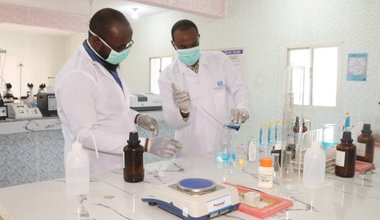 “Responding to the needs of people for hand sanitizers and other disinfectants to prevent COVID-19, I along with my PSU medical colleagues conducted a research and invented hand sanitizers which has the chemical components of isopropyl alcohol, hydrogen peroxide, glycerol, and distilled water,” said one of its co-inventors, Abdirahman Adan Gambool, a medical researcher and Deputy Dean of PSU’s Faculty of Health Sciences.

Mr. Gambool noted that the hand sanitizer adheres to the UN World Health Organization (WHO) standards for quality control, including ensuring that the level of alcohol concentration and combined chemicals would not cause allergic reactions when used.

“As per WHO guidelines every antibacterial must contain more than 60 per cent of alcohol, and the PSU hand sanitizer has around 75 per cent

alcohol. The first experiment was very successful and it was presented in front of people and government health officials, including Puntland’s Ministry of Health,” he added.

“All disinfecting and cleaning products are imported from overseas,  and we cannot easily control their quality, so it's remarkable to get a locally invented product such as the PSU’s hand sanitizer,” said Dr. Jama Farah Hassan, an official from  Puntland’s Ministry of Health. 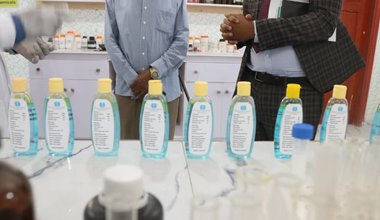 Asides from the praise from local health authorities, the PSU team's ingenuity has also received praise from Somalis, both locally and across the country.

On Twitter, a commentator wrote: “The Pharmaceutical Science Department of Puntland State University has done commendable action and produced the first ever locally made hand sanitizer in Puntland. Job well done, but Puntland State government must provide all the needed materials and support.”

Another Twitter user said, "Puntland is a fascinating place, you find people trying to be creative and beat COVID-19. Puntland State University striving to be first to produce sanitizer in Somalia.”

So far, just 15 small bottles of sanitizer, each containing 100 millilitres, have been produced, and its creators are now exploring funding options and ways to ramp up production to thousands of litres and distribute to those in need.

"We are expecting to produce more sanitizers if we get financial backing from Puntland or the Federal Government of Somalia or international agencies," said Mr. Gambool. 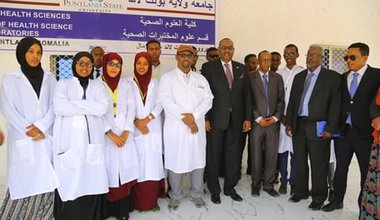 Asides from exploring how to mass-produce the hand sanitizer, the PSU team is also actively contributing to the fight against COVID-19 in other ways, such as supporting community awareness campaigns about maintaining basic hygiene.

The United Nations in Somalia is committed to supporting the country’s authorities and people in the COVID-19 response. Particularly through the WHO, it has been working with the Somali authorities across the country to prepare the country’s health systems to contain and mitigate the spread of the pandemic in Somalia.

On the health front, the United Nations is partnering with the federal and federal member states’ governments to address immediate needs and prepare for future requirements. The world body is also assisting with the coordination of the support from international partners and helping the federal government to prioritise and allocate resources where they are needed.