Mogadishu – The Somalia Partnership Forum concluded today in Mogadishu, with attendees taking stock of progress the country has made, while also noting remaining challenges and agreeing on a set of priority actions needed to take the country forward.

“Somalia is making tremendous strides. We are ready to move forward together in this limited time we have, together with our federal member states; both houses of parliament and the political elite. We will endeavour to chart forward, to ensure that progress achieved is not set back,” said Somalia’s Prime Minister Hassan Ali Khayre, who led today’s discussions.

“Therefore in the coming times,” he continued, “we will work on narrowed priorities, including holding open and fair elections and ensuring a peaceful transition, completion of the constitutional review process and deepening of federalism, all this while not losing sight of the gains made so far and the investment of our international partners.” Mr. Khaire added. 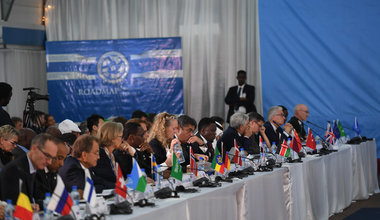 The two-day gathering brought together officials from the Federal Government of Somalia and several of the country’s Federal Member States, and representatives from more than three dozen countries and various international organizations.

Their joint commitments on the way forward were outlined in a communiqué issued at the end of the two-day meeting.

“International partners recognised Somalia’s achievements and commended the leadership of the Federal Government of Somalia for the significant progress in implementing reforms including improved public financial management and revenue generation, consultations on a new National Development Plan, extensive security reforms, successful operations to retake and stabilise territory previously held by Al-Shabaab, increased delivery of social services, and progress towards local reconciliation in some areas,” the communiqué stated.

“At the same time, a number of challenges remain, including the need to generate jobs and economic growth, continue the fight against Al-Shabaab, respond to humanitarian crises and build resilience, lay foundations for inclusive politics and strengthen respect for the rights, participation and representation of women and minorities,” it added. 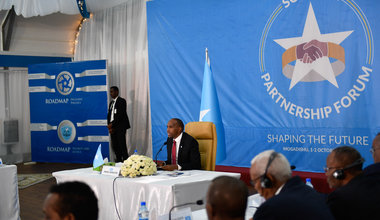 In regard to the so-called Mutual Accountability Framework (MAF) for 2019-2020, the Somali authorities and their international partners agreed on one to narrow their joint focus to priority areas for action and resources in order to achieve key priority outcomes before December next year.

The MAF details the joint commitments of Somalia and its international partners in the areas of political reforms, security reforms, economic development and recovery and humanitarian assistance, as the country rebuilds after decades of armed conflict and climate-related shocks.

The international partners noted today that despite advances in a number of key priorities, strengthened political cooperation between the Federal Government and some Federal Member States would have accelerated progress. Somalia’s leaders agreed that such cooperation is critical in order to make further progress on political, security and economic reforms – and that this will require the strong personal commitment of all federal and state leaders.

‘One person, one vote’ elections

In relation to the federal ‘one person, one vote’ elections planned for sometime around late 2020 and early 2021, the communiqué noted how the country’s executive and legislative arms are committed to adopting an Electoral Law by December this year.

Earlier in the day, during discussions on inclusive politics, the UN Secretary-General’s Special Representative for Somalia, James Swan, flagged the importance of meeting set timelines. 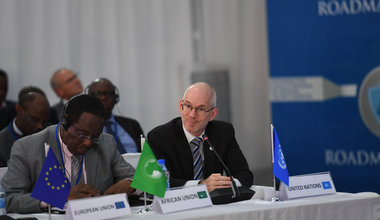 “Passage of the electoral law is the crucial next step and we are pleased to see the commitment to make every effort to complete this by the end of 2019, failure to meet this deadline will jeopardize the mobilization of essential funding and risks slippage in the electoral calendar,” Mr. Swan said.

The UN envoy added, “Inclusive politics if handled with the necessary leadership and consensus building has the potential to accelerate progress across all of the Mutual Accountability Framework commitments.”

The communiqué also noted that Somalia has committed to completing its Constitutional Review by June 2020, as well as adopting an amended Federal Constitution, establishing a Constitutional Court and Judicial Service Commission, continuing the country’s National Reconciliation process, and ensuring the participation of all sectors of society, including women, in political decision-making.

International partners agreed to promote dialogue and political engagement and to mobilize resources to supplement government financing, following the adoption of the legislation to support these processes, and to help Somalia to meet the timetable for preparations.

“In 2020, the focus of these will be jointly identified and planned, to ensure that all stakeholders can align their efforts and resources to agreed locations,” it stated.

Among other areas of cooperation, international partners committed to supporting the generation of human rights-compliant security forces, the stabilisation of newly-recovered areas, including access to justice, and key reform processes, including human resources and payroll reform of the Somali security forces. 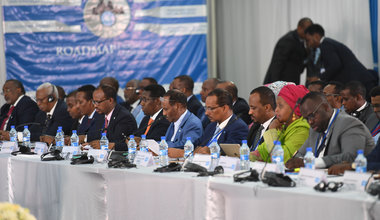 Somalia’s leaders have repeatedly called on the country’s international creditors to grant Somalia debt relief under the Heavily Indebted Poor Countries (HIPC) Initiative, which the International Monetary Fund (IMF) and World Bank established in 1996 to ensure that no poor country faces a debt burden exceeding its capacity to service and manage.

On the issue of next steps to meet requirements for the HIPC Initiative by early 2020, the communiqué noted Somalia’s commitment to meet, in full, the benchmarks in its fourth IMF Staff Monitored Program (SMP).

According to the IMF, Somalia owes some $5.2 billion to its international creditors. The SMP is designed to foster economic reconstruction efforts and enable countries to establish a track record of policy and reform implementation. Somalia completed its first SMP in 2016-2017.

Today, Somalia’s international partners also committed to actively supporting the Federal Government of Somalia to meet benchmarks building on significant progress to date, and to take the necessary steps to prepare for an anticipated HIPC Decision Point early next year.

In the area of how Somali and the international community work together, the communiqué flagged how Somalia has made progress in recent years thanks to the strength of the partnership between the two.

Among their agreements in this area, they agreed to ensure that their efforts are aligned and to adopt and implement a national legal framework governing national and international non-governmental organisations.

“The Forum reaffirmed the commitment of all parties to this partnership and to the principle of mutual accountability in order to maximise their collective efforts to build a bright future for Somalia,” the communiqué stated.