Mogadishu – On a visit aiming to express her solidarity with the women of Somalia, the United Nations Deputy Secretary-General, Amina Mohammed, has called for the full participation of women in the country’s peace, security and development efforts.

As part of a joint UN-African Union (AU) solidarity mission to the region which has been ongoing for the past few days, Ms. Mohammed was in Somalia today. Her delegation included Bineta Diop, the AU’s Special Envoy on Women, Peace and Security, and Parfait Onanga-Anyanga, the Special Envoy of the UN Secretary-General for the Horn of Africa.

“It has been a wonderful experience. What we have had is clarity as to where the Government intends to go with the reforms, with the plans, with the bills that they have put forward, with the recommendations and the processes for the elections,” she told journalists at the end of the visit.

Discussions focused on the upcoming landmark ‘one person, one vote’ elections slated for 2020/2021, the process to promulgate a new federal constitution, the quota for elective positions for women, and women’s participation in other spheres of life such as the business sector.

“We listened to the different constituencies, all in an effort to ensure the centrality of women in the rebirthing, in the healing of a nation that has so much opportunity and prosperity ahead of it,” said the UN’s deputy chief. 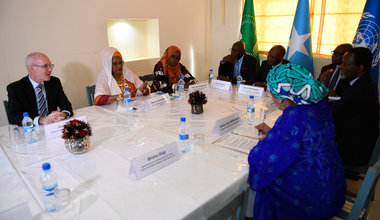 Ms. Mohammed also held separate meetings with representatives and women leaders from civil society organisations; the Chairperson of the National Independent Electoral Commission, Halima Ibrahim Ismail; and officials from the gamut of UN agencies and programmes working in Somalia.

“We are very pleased to see that a woman heads the independent electoral commission. We believe that augurs well for the independence for the credibility and the inclusion of women,” she noted.

The Deputy Secretary-General pledged that the UN would continue to support Somalia’s path to peace, putting at the centre the need for women and youth to participate in the post-conflict reconstruction efforts.

“We urge everyone to come along on this new dawn to rightfully have the whole society to participate in a new era for Somalia,” she said.