Mogadishu, 31 January 2019 - The United Nations top political official concluded a two-day visit to Somalia where she held discussions with the Federal Government of Somalia (FGS) and women representatives of the country’s civil society.

Rosemary DiCarlo, the UN’s Under-Secretary-General for Political and Peacebuilding Affairs, held meetings with President Mohamed Abdullahi Mohamed ‘Farmaajo’, Prime Minister Hassan Ali Khaire, and a group of federal cabinet ministers. Discussions with the President and Prime Minister focused on practical measures for the FGS and the United Nations to work more closely together to benefit the Somali people and support the country’s state building and peacebuilding priorities.

“We are committed to supporting peace, stability and prosperity for the people of Somalia. We are here to help Somalia succeed,” said Ms. DiCarlo after the meetings held in Mogadishu on Wednesday.

The senior UN official welcomed the Federal Government’s ongoing reform agenda, and expressed the strong support of the United Nations for implementation of the milestones set out in the government’s roadmaps on inclusive politics, security and justice, economic recovery, and social development.

“Somalia has made significant progress and, despite the obstacles, there is a strong political will to build a stable future for the Somali people. Many challenges remain but I am encouraged by the determination of all those I met in Mogadishu to address them, and the FGS’ commitment to prioritise good governance, human rights, women’s rights and to complete the Constitutional review. As we approach elections in 2020, the UN stands ready to continue to support Somalia and its people to achieve its goals”, she said. 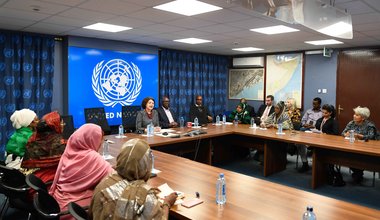 At a joint press briefing with Ms. DiCarlo, the Prime Minister said that the Federal Government had agreed to strengthen its collaboration with the UN to implement a Somali-led agenda.

“We welcome the support of the UN to enable Somalia to achieve its national development goals. We appreciate the UN’s valuable contribution to Somalia over the years and we hope the partnership will grow stronger,” Mr. Khaire stated, adding that the federal government would work closely with the UN to implement programmes that spur development, fight corruption, provide access to education, health and security.

During her visit, the Under-Secretary-General met with women representatives of civil society organisations in Somalia, where she underscored the importance of an independent civil society, while pledging continued support towards the inclusion, representation and participation of women in the country’s political processes in light of the 2020 elections.

“Stability in any part of the world is more likely to be achieved if women are engaged in society,” Ms. DiCarlo noted. “The percentage of women participating in the political life, throughout the world, is still unsatisfactory. We also want to support Somalia to address that," she emphasized.