Belet Weyne, 4 November 2019 – The United Nations has joined the national efforts to provide immediate assistance to tens of thousands of people affected by floods that have devastated parts of Somalia, especially Belet Weyne district in Hirshabelle State.

The World Food Programme (WFP), the food-assistance branch of the United Nations, and other partners facilitated by the Office for the Coordination of Humanitarian Affairs (OCHA) have scaled up humanitarian response, providing food to address the short-term nutrition needs of flood-affected families, as well as potable water, sanitation, shelter and health assistance.

The director of WFP in Somalia, Caesar Arroyo, said that the agency was working closely with Somali Government authorities to deliver relief items to affected families. The agency had delivered by road and airlifted over 260 metric tons of critical relief supplies, including high-energy biscuits.

"This is food that doesn't need preparation and can support children, mothers, and everybody else who will need immediate response," noted Arroyo.

Arroyo added that WFP would continue delivering food to support about 4,000 households, or about 24,000 beneficiaries.

"In the meantime, we are bringing more commodities as a roller food basket, to be able to support up to two months, the area of Belet Weyne and surrounding locations, which are flooded and impacted by the latest climate change situation," said Arroyo.

Heavy seasonal rains triggered floods along the Juba and Shabelle rivers in Hirshabelle, Jubaland and South West states. Flash flooding was also reported in Benadir region, Jowhar in Hirshabelle, and Ceel Jaale and Jamame in Jubaland.

In Belet Weyne district alone, over 270,000 people have been affected, and casualties have been reported. Farmland and infrastructure have been destroyed and livelihoods disrupted in some of the worst-hit areas.

“The floods may eclipse what we experienced last year”

Halimo Osman Abdi fled Koshin village when the rains flooded her home. All her belongings have gone, and she barely escaped together with her family to seek shelter in Ceel Jaale.

She learned about the food distribution organized on one of the rare land patches not engulfed by the waters. 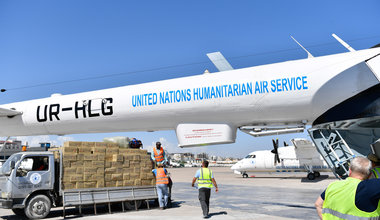 "I have received assistance, and now I have flour and rice. I have my rations here, and am very thankful to Allah," said Halimo, carrying her ration bags.

Hodan Amin has also to rely on the food distributed by the agencies. She left her home village of Hawo, in Dhagah Jibis, and now is among the displaced people presently sheltered in Ceel Jaale.

"Our homes are submerged now, and we can only access the area by boat," explained Hodan after receiving her ration.

During a visit to Belet Weyne on Saturday, President Mohamed Abdullahi Mohamed 'Farmaajo' expressed his concerns regarding the scale of the floods devastation, and the effort needed to recover.

"We know that last year's floods were the worst on record. But this year, the floods may eclipse what we experienced last year," the President noted.

"The WFP has informed us that food distribution would continue as they endeavor to reach all affected villages," he said.

OCHA Somalia, which is supporting the flood response task force comprising local authorities and humanitarian partners, reports that the medium- and long-term needs of the affected communities cannot be met by available resources, and further assistance is urgently needed.