“One of the issues I had wanted to raise with His Excellency was the issue of women’s participation in the Upper House process,” said the UN Secretary-General’s Deputy Special Representative for Somalia, Anita Kiki Gbeho, referring to her scheduled meeting with Jubaland’s President Ahmed Mohamed Islam ‘Madobe’ earlier on Tuesday.

“He beat me to it. He announced — we are very pleased to have heard the news this morning — that two seats will be reserved for women, and of the two remaining seats, a woman will be competing for one of the seats. So good news coming out of Jubaland this morning,” she added.

The UN official was on an introductory visit — her first to the southern Federal Member State — to meet with Jubaland’s leadership, as well as electoral officials, including the chairperson of the State Electoral Implementation Team (SEIT), Siyad Mohamed Mursal, and civil society representatives. The country’s ongoing elections were a key topic on her agenda.

“It’s important, since I’m here to serve Somalia, that I go around and understand the different regions and I understand what is important to them,” Ms. Gbeho said. “This is a time when we’re smack in the middle of the [electoral] process, and we wanted to ensure that the Upper House process is finalized here in Jubaland and then we move on to the Lower House process.”

Jubaland was the first of Somalia’s Federal Member States to start holding Upper House elections. Four seats had already been filled, and the administration announced early on Tuesday that the elections for the remaining four Upper House seats would be completed on Thursday.

The country’s international partners had previously emphasized the need for the election of the remaining Upper House seats to be completed quickly in order to allow the electoral focus to shift towards the next phase of the federal elections, those for the Lower House, known as the House of the People.

In her comments in Kismayo, the UN Deputy Special Representative echoed the international community’s points, and noted that lessons could be learned.

“It means that it can go ahead and begin [the Lower House elections],” Ms. Gbeho said. “We know that for Somalia this will not be an easy process, we saw the process for the Upper House elections, we saw some of the comments that came through. But if we look at the glass as half-full, then we could learn from the process of the Upper House and use it to influence the Lower House process moving forward.”

Somalia’s international partners have also been advocating for the country’s leaders to ensure that the electoral processes respect the right of women to participate fully in all aspects of public life, and that the minimum quota of 30 per cent women’s representation should be achieved in Parliament.

“Women are 50 per cent of the population — if you move forward with half of your population not being represented, not having a voice, not having a say, I dare to imagine that it's unlikely that you will find solutions to the problem, and government — this life of service is about people — it is about building Somalia,” the UN Deputy Special Representative said.

“So if you don't have Somalis at the table or if you have half of the population missing when you're taking decisions,” she continued, “when you're trying to agree what the way forward would look like, I'm not sure you will actually get to your end game or the vision that Somalia imagines for itself.”

To see more photos of the visit, check out our Flickr album here. 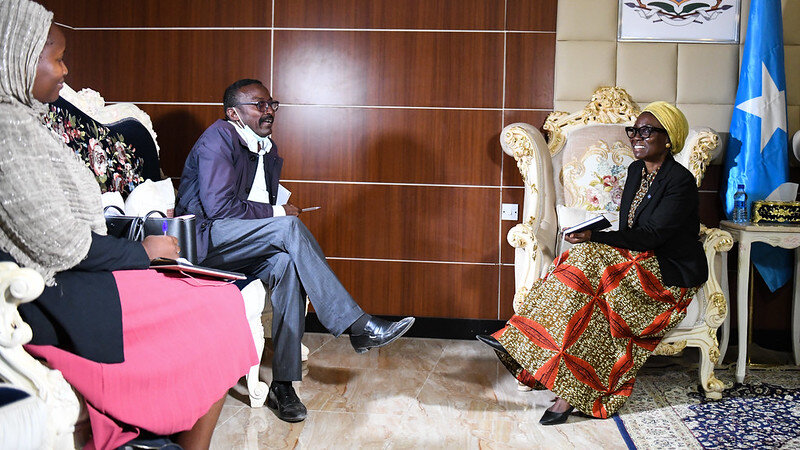