Minneapolis - On a whirlwind visit to the city of Minneapolis, home to the largest Somali diaspora population in the United States, the top United Nations envoy for Somalia highlighted the valuable links between the local community and the Horn of Africa country.

“The diaspora is both a repository of ideas, of business connections, of hope, in many ways, and the government in Somalia right now is the most diaspora government there has ever been,” the Secretary-General’s Special Representative for Somalia, Michael Keating, told a meeting of Somali entrepreneurs, community leaders and humanitarian aid organizers at the local office of the National Urban League, a non-partisan civil rights organization. 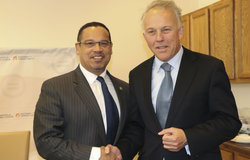 Based in the Somali capital of Mogadishu, the UN official was visiting as a guest of local legislator Keith Ellison, who represents the Fifth Congressional District of Minnesota, of which Minneapolis is the capital, and where most of the state’s residents of Somali heritage live. The previous day had been spent in UN Headquarters in New York City, where he had briefed the UN Security Council on the latest developments in Somalia.

In the meeting with the National Urban League, participants expressed concern over the security threat posed by Al-Shabaab militants. Other topics included US regulations on remittances – a vital source of hard currency for the east African nation – and ongoing political tensions in Somalia.

“We are grateful to facilitate the kind of conversations that are taking place in Somalia right now. The current reality is not state-forming, it is state-building, and that is a huge progress,” Mr. Keating told the meeting’s attendees when updating them on the situation on the ground.

“We are grateful to facilitate the kind of conversations that are taking place in Somalia right now. The current reality is not state-forming, it is state-building, and that is a huge progress.”

The Special Representative later delivered a speech at the University of Minnesota’s Humphrey School of Public Affairs, entitled, ‘New Beginning in Somalia: Building Lasting Peace, Security, and Prosperity.’ His remarks focused on financial reform, job creation initiatives, inclusive politics and the vital role the Somali diaspora is playing in the reconstruction of their country.

“The government in Somalia is largely drawn from the diaspora, a lot of the money that is helping people cope with the current drought conditions is coming from the diaspora,” he said. “A lot of the political support for Somalia from a number of countries, whether it’s the US, Europe, Canada or other places, is coming as a result of the diaspora support.”

The audience questions Mr. Keating fielded ranged from the state of Somalia's health care system and security conditions to the role of women in the country’s politics. 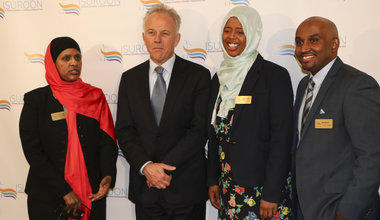 Mr. Keating’s day-long visit included a luncheon with elected Somali-American officials, and a stop at the headquarters of Isuroon, a non-profit organization that lobbies for the empowerment of Somali-American women in Minnesota and improved health care services for the diaspora community.

Founded by Fartun Weli in 2010, Isuroon also operates programmes designed to combat gender inequality, poverty and social isolation. Ms. Weli thanked the UN envoy for meeting with women, girls and families who are supported by her organization, adding that, “We are very proud to create a safe space for women.”

The Special Representative ended his stay in Minneapolis with a tour of the four-story Karmel Mall, the largest shopping centre catering to the Somali community in the United States, and which also serves as a community centre bringing together people of Somali heritage.