Addressing an audience of senior journalists and civil society representatives in Mogadishu, the United Nations envoy to Somalia today highlighted the important role played by its media and reaffirmed the world body’s support for its rights and development into a responsible and vital part of the country’s society.

“The UN is very supportive of a free and responsible media, and we will do our best to support you in that because we think it is good for the future of Somalia, it is good for democracy, it is good for accountability,” the Secretary-General’s Special Representative for Somalia, Michael Keating, said.

“Somalis are very proud of their freedom of expression and they don’t want to be silenced, but it needs to be done in a responsible way,” he added.

The UN official was speaking at a discussion on the topic of ‘A Free Press Contributes to Good Governance, Peace and Democracy in Somalia,’ organized by the National Union of Somali Journalists (NUSOJ) and supported by the UN Assistance Mission in Somalia (UNSOM).

In 2016, in its ‘Report on the Right to freedom of Expression: Striving to Widen Democratic Space in Somalia’s Political Transition,’ UNSOM and the Office of the UN High Commissioner for Human Rights (OHCHR), UNSOM highlighted that freedom of expression plays a central role in building democratic states and in time of political transformation. The report made recommendations to the country’s federal and state-level authorities, including fostering a conducive environment for all Somalis to express their opinions freely.

In his remarks, Mr. Keating highlighted the important role played by the media in societies around the world, which included helping keep those in power accountable.

He also pointed to the importance of Somalia’s recognition of press freedom under Article 18 of its 2012 Provisional Constitution, which deals with freedom of expression and opinion. It states that every person has the right to have and express their opinions and to receive and impart their opinion, information and ideas in any way, and that freedom of expression includes freedom of speech, and freedom of the media, including all forms of electronic and web-based media. 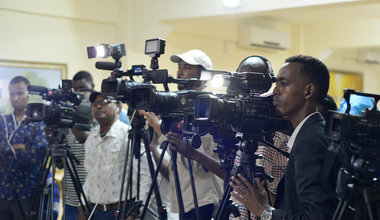 “One of the responsibilities of the media is to report accurately and not to abuse the power that the media has,” Mr. Keating said. “All around the world now this is becoming a big issue with the story of fake news, stuff going out on social media which is politically motivated, and frankly, it’s becoming increasingly difficult for people to understand what is going on.”

In that vein, he noted the importance of capacity-building to help improve the professionalism of Somali journalism.

“It seems to me that a responsible media requires good training opportunities, good internship and apprenticeship opportunities, and that requires resources, so if NUSOJ is in the business of trying to help professionalize the media, that is extremely important – sometimes this does not get the attention and support it deserves,” the envoy said.

In addition to the need for improving the capabilities of Somali journalists – something by UNSOM and the UN Educational, Scientific and Cultural Organization (UNESCO) are actively engaged in – Mr. Keating also recognized the challenges they face in reporting in Somalia. According to the non-governmental organization Committee to Protect Journalists, 64 Somali journalists have been killed since 1992, with 44 of those targeted for murder and 37 murdered with impunity.

REPORT ON THE RIGHT TO FREEDOM OF EXPRESSION:  Striving to Widen Democratic Space in Somalia’s Political Transition (August 2016)