UN, Somalia recommit to end the recruitment and use of child soldiers

UN, Somalia recommit to end the recruitment and use of child soldiers

Mogadishu – The Federal Government of Somalia (FGS) has renewed its commitment to end the recruitment and use of child soldiers by signing a roadmap detailing measures and practical actions to prevent violations against children, release children associated with armed forces, and reintegrate them into communities. The Special Representative of the Secretary-General for Children and Armed Conflict, Virginia Gamba, witnessed the signature of the roadmap.

"The whole United Nations body and the civil society of good faith will support this plan so that across Somalia in all regions, all law enforcement officials, all members of any armed forces will be the first to protect children from violations,” said Ms. Gamba.

“And for this, we will support the possibility of vetting, of screening, of capacity building and of ensuring that children that are captured, or that escape, or children that are in any way released, will also receive the rehabilitation and reintegration needs that they deserve,” Ms. Gamba added.

The UN official was speaking in the wake of signing of the roadmap, which is in line with action plans signed by Somalia and the UN in 2012 to protect children from recruitment and use by the army and protection of children from being killed and injured.

According to the UN Secretary-General's Report on Children and Armed Conflict, released in June 2019, armed groups in Somalia forcefully recruited and used in conflict 2,228 boys and 72 girls in 2018. Al-Shabaab recruited 1,865 children, accounting for the highest number of child recruits.

Somalia’s Federal Minister of Defence, Hassan Ali Mohamed, represented the FGS at the signing of the agreement. In his remarks, he emphasized the FGS’s commitment to ending children’s rights violations, including forceful recruitment.

While in Somalia this past week, the UN official also visited Baidoa, the capital of the South West State (SWS), where she announced the launch of a $2 million Peace Building Fund project supporting the prevention of child recruitment and reintegration of children formerly associated with armed forces and groups. The project aims to reinforce prevention, screening Somali security forces including regional forces to ensure that there are no children in their ranks, release those identified, rehabilitate and reintegrate them. 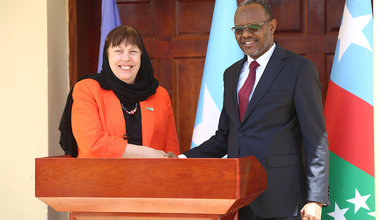 Following a meeting with SWS’s President Abdiaziz Hassan Mohamed Laftagareen and his cabinet ministers, Ms. Gamba stressed the commitment of the UN and international partners to preventing all forms of violations against children.

Speaking at the end of their meeting, President Laftagareen expressed his agreement on the way forward to strengthen child protection.

"Our discussions focused on the protection of children from recruitment as fighters, protection of women's and children's rights. We had good discussions and agreed to launch a campaign against child rights violations and come up with plans to educate children," the SWS leader said.