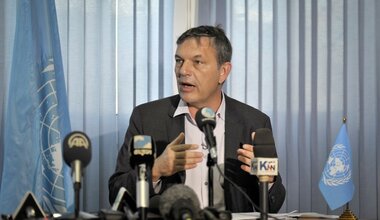 Mogadishu, 15 June 2014 - Despite improved security in some parts of Somalia following a military operation against Al Shabaab earlier this year, the fragile humanitarian situation in the country could become an emergency unless funds are made available to support life-saving interventions, Philippe Lazzarini, the UN Humanitarian Coordinator for Somalia, has said.

While addressing a press conference in the capital, Mogadishu, on 15 June, Lazzarini said Somalia risked drifting back into a humanitarian crisis, with the already fragile food security situation likely to worsen in the coming months as a result of delayed rains, continued conflict and rising food prices.

"Our assessments have shown that over 857,000 people in Somalia require urgent and life-saving assistance, an additional 2 million people are on the margin of food insecurity and require continued livelihoods support,” he said, adding that decades of conflict had displaced more than one million people inside Somalia.

Lazzarini explained that the situation was further compounded by the military offensive and the recent Al Shabaab tactic of blocking major supply routes and encircling newly recovered areas, which was hampering commercial activity and the ability to transport humanitarian support to those regions.

He noted that just 22 percent of the US$933 million humanitarian appeal for the country is funded.

"We are facing a significant resource gap that has undermined life-saving programmes like the provision of food, water, sanitation and health," Lazzarini said.

Somalia’s humanitarian needs remain vast, with global acute malnutrition levels among internally displaced people above global emergency levels of 15 percent; the country is among the five countries in the world with the highest child malnutrition rates, with one in seven children under the age of five estimated to be acutely malnourished.

Lazzarini cautioned that unless addressed urgently, the worsening humanitarian situation could have implications for the country's recent political gains.

“We need to address the peace and security agenda, the state-building agenda, but we should not drop the humanitarian agenda off the table,” he said. “If we continue to ignore it, it may undermine the rest of the positive agenda which is also unfolding in the country.”

“The country is once again at a moment where an emergency is just around the corner. Action is required now, before this downturn becomes an actual emergency,” he added. “The next two months are critical.”

The “broad political consensus” reached in September that ended a two-year stalemate in Somalia must be “preserved and indeed deepened,” the country’s UN envoy told the Security Council on Monday.

Mogadishu – Somalia’s international partners (see list below) have closely followed the establishment of the second Hirshabelle State regional assembly, the recent presidential election in the State and the ongoing preparations fo