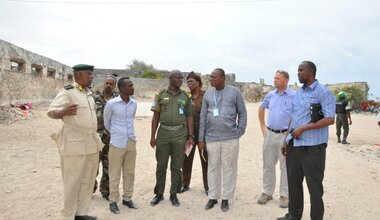 Mogadishu, 9 June 2014 – Officials from the corrections department of the United Nations Assistance Mission in Somalia (UNSOM) visited the Mogadishu central prison today to monitor ongoing renovation projects and to discuss with the custodial management ways to support their needs and priorities.

The prison is being renovated at the moment with the support of the United Nations office on Drugs and Crime (UNODC) including fencing and building of septic tanks.

UNSOM corrections officer Francis Benon highlighted the need for an in-depth assessment on the prisons infrastructure and its human resources’ capacity.

“We would like to conduct a participatory needs assessment and develop a strategic plan together. We understand your priorities and with the right resources you can improve not only Mogadishu central prison but also all prisons across south central Somalia,” He said.
We are also organizing a management training course for the custodial managers in this month which we also plan to repeat in Garowe,” He added.

The custodial commissioner, Colonel Hussein Hassan Osman welcomed UNSOM’s efforts in supporting the national corrections sector stressing that the sector lack proper attention in the national agenda. “We cannot carry out some of our duties effectively due to lack of resources. We don’t have enough vehicles and the infrastructure of our prisons is very poor,”

“Other security sectors are far much ahead of us in terms of receiving support and resources such as police and military. It seems we are forgotten despite the fact that we are doing equal service for the country,” He said.

Stephen Cox, UNSOM corrections officer expressed the same concern and re-affirmed that the corrections department has put a lot of effort in pleading donors’ support for Somalia’s prison sector.

“We are confident that some resources will be coming for the corrections sector. We have asked for donor funding in the areas of infrastructure, training, and construction of new prisons facilities and provision of vehicles for all those prisons.”

The “broad political consensus” reached in September that ended a two-year stalemate in Somalia must be “preserved and indeed deepened,” the country’s UN envoy told the Security Council on Monday.

Mogadishu – Somalia’s international partners (see list below) have closely followed the establishment of the second Hirshabelle State regional assembly, the recent presidential election in the State and the ongoing preparations fo