‘Increasing awareness about explosive hazards can save many lives,’ says UN demining agency

‘Increasing awareness about explosive hazards can save many lives,’ says UN demining agency

Baidoa –  Mukhtar Abdi was tending to his family’s goats in the southwestern Somali city of Baidoa one day when a shiny, circle-shaped metallic object caught the nine-year-old boy’s attention. “It seemed beautiful to me. I removed it from under a thorn tree and started playing with it. Unfortunately, when I banged it against that tree, it exploded,” he recounts. 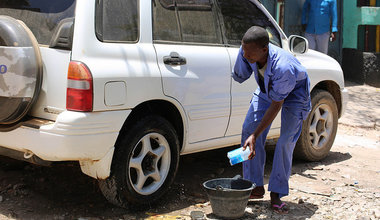 Mr. Abdi survived, but he sustained severe injuries in his chest and a fractured right hand. No functioning hospital existed in Baidoa in the early 1990s, and he could only receive medical treatment at a local pharmacy. “I believe that the probability of fixing the fracture of my hand was very high at that time, but due to a lack of proper medication and personnel, my hand was amputated,” he says.

Many years of armed conflicts in Somalia have bequeathed a lethal legacy of explosive devices, including landmines and explosive remnants of war (ERW) which, according to the UN Mine Action Service (UNMAS), affect marginalized communities in conflict-affected areas and along border regions. The threat of improvised explosive devices (IEDs) in the country remains an ever-present source of danger.

Almost 3,000 civilians have been killed or injured in IED incidents in Somalia over the last three years. Of these, 2017 was the deadliest, in large part due to an IED attack on 14 October in Mogadishu which killed more than 500 people and injured over 300. Children accounted for three-quarters of all casualties caused by unexploded ordnance last year.

The threat posed by explosive hazards is a grim fact of life for many Somalis, causing the tragic loss of lives and livelihoods and affecting the physical and emotional well-being of people in many parts of the country.

As the world prepares to observe International Mine Awareness Day on 4 April, UNMAS is highlighting how mine action operations provide a tangible form of protection, reducing the explosive threats faced by affected communities, as well as vulnerable populations such as internally displaced persons and refugees.

Abshir Mahdi Isakh is an UNMAS specialist on unexploded ordinance who educates Baidoa residents about the risks of explosive devices and carries out demining operations to help keep communities safe. “Last month, a farmer in Baidoa was trying to expand his farm. As he was trying to remove an old fence, he found a serious-looking ERW. He reported it to our office, so we went to the farm and removed it. He can now continue his work,” he says.

According to UNMAS data, in 2017 alone more than 70 communities in Somalia benefitted from the clearance of explosive remnants of war in over 450 locations. Similar work is being carried out currently in more than 40 districts nationwide to rid communities of explosive hazards. 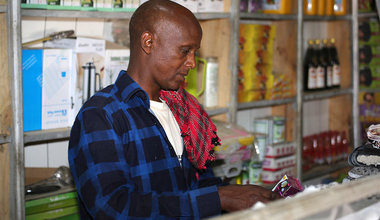 Abdinuur Moalim Abshir, a carpenter and builder by trade, lives in one of the communities which have benefitted from UNMAS activities in Baidoa and environs. “We had a big problem before demining began. We used to see many people and animals dying from explosive remnants of war. We could not even build new houses because when we would start to dig the foundations, we would come across landmines that were buried there a long time ago, and this would impede building further,” he says.

Casualties from ERW have decreased, says Mr. Abshir, and he can now gather the necessary building materials for his line of work without constantly worrying about explosive hazards. “If we happen to suspect that remnants of explosive materials can be found, we can easily report it to the UNMAS office in Baidoa,” he notes.

According to the UNMAS approach to conflict prevention – which draws from the central role of development in sustaining peace – as contaminated land is cleared, communities are empowered to recover and rebuild their towns, cities and economies.

Mr. Isakh, the UNMAS technician, also underlines the benefits of knowing the risks associated with landmines and other explosive hazards, and the action that can be taken to mitigate them. “Increasing awareness regarding threats of explosive remnants of war creates room for saving many lives. Nothing is more valuable than knowledge. Awareness is the best solution for this issue,” he concludes.