Mogadishu – Marking the International Day for Mine Awareness and Assistance in Mine Action, a top United Nations official in Somalia today highlighted the danger posed by improvised explosive devices (IEDs) to the country’s civilian population. 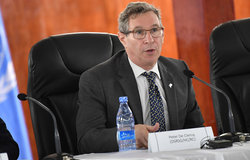 In his remarks at an observance event in the Somali capital, the Secretary-General’s Deputy Special Representative for Somalia, Peter de Clercq, drew particular attention to the threat posed to children by landmines and explosive remnants of war (ERW) left behind after years of conflict.

“Each year, 75 children are killed or injured by mines and explosive remnants of war in this country. And the impact on lives and livelihoods therefore is devastating,” said Mr. de Clercq.

“Many more people are killed through these improvised explosive devices along Somalia’s roads and across its cities,” he added.

Years of armed conflict in Somalia have resulted in widespread contamination with ERW and landmines, as well as a steady rise in the use of IEDs – the latter remain the deadliest threat to lives in the Horn of Africa country and were responsible for killing and injuring more than 1,400 civilians last year, according to the UN Mine Action Service (UNMAS).

More than 900 people were killed and injured by the devastating IED explosion that occurred in Mogadishu on 14 October 2017, which Mr. de Clercq described as “one of the worst” IED bombings to ever occur in Africa.

The theme for this year’s observance of the international day is “the role of mine action in advancing protection, peace and development,” underscoring the obstacle that IEDs, landmines and unexploded ordnance represent to the country’s economic growth and development.

“Scaling up the mine action programme can play a key role in providing jobs in rural areas and improving livelihoods by making roads passable and allowing for the movement of goods and people,“ Mr. de Clercq, who also serves as the UN Humanitarian Coordinator for Somalia, told those gathered at the event, which included representatives from the Somali authorities, civil society and international community.

Also addressing the observance, the Head of UNMAS in Somalia, Alan MacDonald, stressed the importance of removing all unexploded ordnance and landmines, the contents of which are often used to assemble IEDs. 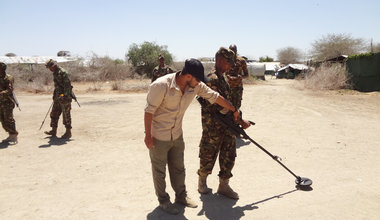 In his remarks today, the Director General of the Somalia Explosive Management Authority (SEMA), Abdulkadir Abdulle Hooshow, called for more donor support for mine disposal initiatives in the country. He said his agency has developed a national mine action strategy to guide mine disposal programmes for the next three years.

“There is no proper investment in efforts to dispose of mines in Somalia and there is insufficient stakeholder coordination. There is also insufficient international funding for landmine disposal programmes and poor training,” said Mr. Hooshow.

When it declared 4 April of each year as the International Day for Mine Awareness and Assistance in Mine Action in 2005, the UN General Assembly also called for continued efforts – with the assistance of the United Nations and relevant organizations – to foster the establishment and development of national mine-action capacities in countries where mines and ERW constitute a serious threat to civilian populations, or an impediment to social and economic development at the national and local levels.

Somalia is a signatory to the Convention on the Prohibition of the Use, Stockpiling, Production and Transfer of Anti-Personnel Mines, which requires countries to destroy all such landmines by October 2022.