14 October Anniversary - Abdulkadir Mohamed Abdulle: Mourning the death of a friend and colleague

14 October Anniversary - Abdulkadir Mohamed Abdulle: Mourning the death of a friend and colleague

The 14 October 2017 bomb blast that ripped through the capital city of Mogadishu and killed more than 500 civilians is still fresh in the mind of Abdulkadir Mohamed Abdulle.

The reporter for the Voice of America’s Somali Service and his colleague, cameraman Alinur Siyad Ahmed, were looking forward to a fruitful Saturday. The two journalists had completed a special report on the Mogadishu Central Prison in the city’s Hamarweyn district and were driving back to the Hodan area where their office was located.

Since they were on deadline, Abdulkadir hurriedly parked his car in front of the Red Crescent office block and began walking towards the Voice of America bureau. Alinur stayed behind to retrieve his equipment from the boot of the car.

At that point a truck full of explosives was speeding towards the bustling Zoobe junction, which at the time was full of people from all walks of life.

“I had just crossed the road and was walking towards the Safari Hotel, but before I reached my office I heard a deafening explosion. Its shockwaves lifted me into the air before I fell hard on the concrete pavement,” recalls Abdulkadir.

The force of the blast was so strong that the 30-year-old reporter remained prostrate on the ground in an unconscious state.

“All I can remember is that I gained consciousness on a bed in Medina hospital, writhing in pain and unable to move my limbs,” he notes.

Abdulkadir was retrieved from the rubble by a team of rescuers who rushed him to the Mogadishu hospital for emergency treatment. He later learned that his workmate Alinur had died instantly in the attack. 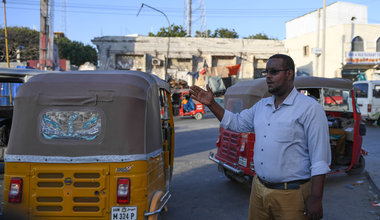 Abdulkadir suffered a fractured limb and life-threatening soft-tissue injuries caused by flying shards of glass and razor-sharp pieces of metal. After two days of treatment, the doctors at Medina hospital recommended he be flown abroad for specialized medical care.

The journalist was one of 35 patients who were evacuated to Turkey and admitted to Polatli hospital in the capital city Ankara.

“I thank Allah that the treatment I received put me on a path to recovery and ensured that I lived to see another day,” said the father of two daughters.

During the month he spent at Polatli hospital, Abdulkadir had to cope with constant physical pain. He also had to bear the heavy emotional burden of mourning his friend and fellow journalist Alinur, who perished before the birth of his youngest child some weeks later.

Despite the loss, Abdulkadir has remained strong for the sake of his two young daughters. To fully recover, he had to seek physiotherapy, and the painful memories of the attack continue to haunt him.

“I still experience flashbacks every time I pass through Zoobe junction due to the trauma I went through,” he says.

The incident has strengthened Abdulkadir’s resolve to inform and educate the public about the importance of rebuilding the country on solid and peaceful foundations. As Somalia marks the first anniversary of the devastating attack, Abdulkadir urges his fellow youths to use the occasion to advocate for peace and reconciliation.

The Federal Government of Somalia has described the 14 October 2017 terrorist attack as the deadliest in the history of the country. To this day, hundreds of survivors are still coping with the physical and emotional consequences of the incident.