Abdullahi Mire: A personal experience with the benefits of education for refugees

Abdullahi Mire: A personal experience with the benefits of education for refugees

The sprawling Dadaab refugee complex in north-eastern Kenya has a population of close to 220,000 registered refugees and asylum seekers. Most of them are from Somalia and some 56 per cent are children.

Operations there are coordinated by the Office of the UN High Commissioner for Refugees (UNHCR), which, along with its partners and with the support of the Kenyan government and host community, has for close to three decades provided all essential services for the refugees – including education. 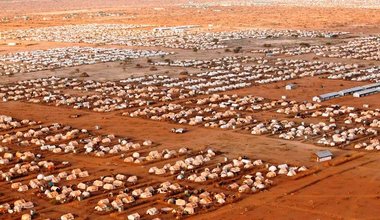 The number of students enrolled across pre-school, primary school and secondary school stands at just over 62,000.

Yet, despite these signs of progress, challenges remain in its educational activities. According to UNHCR, in some of the schools, teachers work double shifts as one group of children attend school in the morning and another group comes in the afternoon. The lack of text books, teaching material and stationery contribute to low performance in the schools in the camps. This is on top of the strong demand for more classrooms, desks, textbooks and teachers.

Out of those students who manage to complete secondary school, only a small number are able to go on to further education.

Abdullahi Mire is one of the fortunate ones who did. 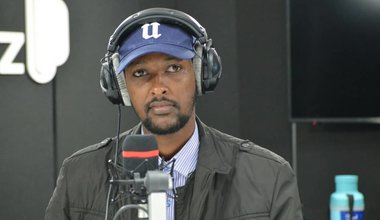 Born in southern Somalia in 1987, Mr. Mire lived in Dadaab in the 1990s when his family fled the country’s conflict. He spent 23 years in the refugee complex and eventually went on to tertiary study at Kenya’s Kenyatta University, from which he graduated with a diploma in journalism and public relations in 2013.

He later went on to work for the UN’s International Organization for Migration in Mogadishu and the southern Somali cities of Baidoa and Kismayo. His work centred on disarmament, demobilization and reintegration issues, aimed at taking combatants out of their groups and helping them to reintegrate as civilians into society.

“At that time, I realized that Somali youth are a disenfranchised lot. Because of illiteracy, these young men were indoctrinated with radical ideologies. If you can’t read, someone else will do it for you. You will be brainwashed. That is what happened to the youth in those locations,” Mr. Mire says.

His time growing up in Dadaab and subsequent work experience drove home the importance of education – so much so that he ended up deciding to dedicate his working life to helping the complex’s population through education. In early 2018, he started an organization called Refugee Youth Education Hub (RYEH), which has two full-time staff and six volunteers and focuses on refugee education and youth development.

“I want to change the lives of refugee children and youth living in Daadab. The only way to do that is through education. If you give quality education for these children or youths, their lives will be improved for good,” he says. “For societies to progress, especially the ones recovering from decades of conflict, education must be a priority. I think it’s the midwife of peace and stability, if not more.”

Mr. Mire firmly believes education promotes peace and development, and should be a priority for Somalis as their country rebuilds after decades of conflict and amid acts of terrorism. He notes that the youth in Dadaab have a massive appetite for learning – and that their reading skills are strong, despite the traditionally oral culture associated with Somalis.

“This camp has produced intellectuals – brilliant students who have been admitted to Ivy League universities in the United States of America, like Princeton University, as well as universities in Canada. It has also produced excellent journalists, teachers, writers and other professionals,” he says. “Given the same opportunities as others, Daadab youngsters can contribute to the rebuilding of their home country.”

A new activity carried out by RYEH is the ‘Dadaab Book Drive,’ aimed at providing Dadaab’s residents, especially its students, with reading material. The first was held in March 2019 to great success. 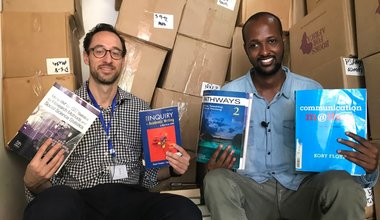 “The Daadab Book Drive was a massive campaign directed towards Somali diasporas and international organizations to donate books to schools in Daadab. It was a successful initiative,” Mr. Mire says. “It is a generous thing to do for these children.”

More than 20,000 books were donated to RYEH’s ‘Dadaab Book Drive’ in 2019 by the non-profit organization Books For Africa. The Embassy of Qatar to Kenya and UNHCR are also major donors of books. Mr. Mire hopes the event will become a regular one.

“The number of students will continue to increase in these schools. And what does this mean? They all need books. Imagine a book shared by 10 students – that is why Refugee Youth Education Hub continues to advocate for the rights of these students and encourage international organizations, corporate and individual well-wishers to help us get as many books as we can so that we can make the ratio one to one,” he said.

With the donated books, Mr. Mire is establishing a public library in the Dadaab complex. The library is currently under constructions.

“The public library will quench the thirst of knowledge of Daadab’s youth. It will be a space for them to do assignments and read for pleasure. I hope by the end of the day they will develop a reading culture,” he noted.

However, Mr. Mire’s ambitions extend beyond Dadaab, all the way over the border and into his home country.

“In a nutshell, my ultimate plan is to extend this initiative to Somalia, especially in cities like Kismayo, Baidoa, Garowe and several others soon,” he says, adding that he knows it will not be easy but that he is determined. 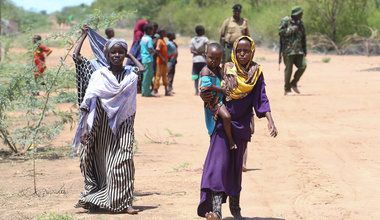 As it continues on its path to peace and stability after decades of conflict, Somalia has made important strides in rebuilding its education system, with steps such as the introduction of unified curriculum for primary and secondary schools and a standardized exam system.

However, challenges remain. According to the UN Children’s Fund (UNICEF). Somalia has one of the world’s lowest enrolment rates for primary school-aged children – only 30 per cent of children are in school and only 40 per cent of these are girls. Furthermore, only 18 per cent of children in rural households are in school. In addition, extremely high rates of poverty in communities across Somalia make it difficult for parents to afford school fees. In many areas, parents are required to pay for their children’s education, and poverty remains the main reason they give for not sending their children to school.