After years of conflict, Somalia eager to recapture former glory as tourism destination

After years of conflict, Somalia eager to recapture former glory as tourism destination

Mogadishu – Once, in the 1960s and 70s, it was known as the “Pearl of the Indian Ocean.” That was before decades of armed conflict and instability drove visitors away from Mogadishu, the capital of Somalia, leaving a once-thriving tourism a distant memory.

However, there are steps underway to return it, and the rest of the country, to its former glory as a haven for tourists seeking a mix of beach, culture and history – so much so that in some quarters, the country’s neglected tourism sector, while still in its nascent stages, is being touted as a potential catalyst of significant economic growth and employment in coming years.

That prospect received a boost last September when Somalia was admitted as the 157th member of the United Nations World Tourism Organization (UNWTO) at the organization’s general assembly meeting in Chengdu, China. 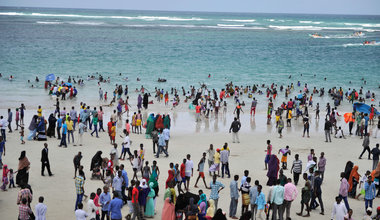 According to the UNWTO, which helps destinations position themselves in global tourism markets, the spread of tourism in industrialized and developed states has produced ‎economic and employment benefits in many related sectors – from construction and ‎agriculture to telecommunications. It adds that developing countries particularly stand to ‎benefit from sustainable tourism and acts to help make this a reality.‎

The outbreak of civil war in 1991 triggered the collapse of Somalia’s once-promising tourism sector, and for the ensuing 25 years the only foreigners who visited the country tended to be diplomats, aid workers, African Union peacekeepers and employees of the United Nations and other international organizations.

Though still modest, the number of bona fide tourists arriving from Europe, Asia and the United States has been on the rise in recent months.

“Now we have lots of people daring to come to Somalia. (Last) year alone we hosted almost 40 non-Somalis, most of them Europeans,” said Noor Hassan, a tour operator with the Mogadishu-based Sahan Hotspot Travellers firm.

Mr. Hassan said some recent visitors have hailed from some unlikely locations, including one group of Chinese tourists who came to the country in September 2017.

“This week, we have the first ever Singaporean citizen in our country which gives us pleasure,” said the tour operator, who started working in the industry in 2013. “We have been hosting a lot of people from the European Union, the United States and Asia.”

As an advisor to the federal government’s Ministry of Information, Culture and Tourism, Yasir Baffo played an instrumental role in securing the country’s admission to the UNWTO, and he reels off a list of tourist attractions that Somalia offers to foreign visitors. 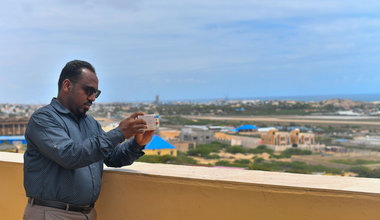 “When we look at ecotourism, the areas that tourists can go to are beaches; at the same time we have a place where the river and the sea join each other in Goobweyn near Kismaayo. In Baidoa we have waterfalls, we have hot springs in Bossaso. We have caves and white sands,” he observed.

Older Somalis can remember an era when Mogadishu was considered to be one of the African continent’s most attractive cities, and yellowing post cards from the 1960s hark back to an era when the capital was famous for its wide boulevards, spacious parks and colonial architecture.

It will take decades to make Somalia a viable tourism destination that can compete with the likes of Uganda, Tanzania and neighbouring Kenya. But the federal government’s Ministry of Information, Culture and Tourism, is moving forward with plans to promote the country and put Somalia firmly back on the map of international tourism.

“The (tourism) department is quite active now, and we are working to have locals understand the value of this industry,” said Mr. Baffo. “Somalia is ready to welcome the world, Somalia is ready to host events and conferences on the continent.”