Ahmed Diini Hassan knows only too well the importance charity work plays in the lives of the poor and vulnerable members of society.

Born in 1956, Ahmed, who hails from Hiiran region, was orphaned at a tender age, leaving him dependent on charity of others.

“I was only two years when I lost my mother, before I could even get over it, my father also died. It was the worst period in my life,” says Ahmed.

Having nowhere to go, in 1961, one of his relatives took him to the Somali capital of Mogadishu and registered him in a crowded government-owned orphanage, hosting more than 100 children.

Feeling abandoned by relatives, Ahmed developed a strong bond with charity workers at the orphanage who acted as his foster parents.

“I have never known how it feels to be raised by a mother or a father, and I credit charity workers at the orphanage for my upbringing and helping me acquire education,” says the Somali National University graduate.

After graduating with a bachelor’s degree in veterinary science and agriculture, in 1981, Ahmed landed a job with the Ministry of Livestock and Husbandry.

Being busy at work did not mean forgetting the impact that charity can have. Ahmed continued to maintain strong links with humanitarian organisations, donating a portion of his salary every month to help vulnerable members of society, mainly women and children.

However, in 1991, Ahmed’s world was turned upside down – civil war broke out, the central government collapsed, and he was left jobless.

Despite the challenges, Ahmed never gave up on his dream of establishing some sort of charity group. In 1995, he teamed up with six of his friends to establish a not-for-profit organisation called Somali Peace Line (SPL), which would later become one of the leading charitable organisations in the country.

“Growing up in an orphanage is what drove me into charity work and my main objective was to help women and children who were worst affected by the civil war,” observes the 62-year-old and father of 11 children.

For the past 20-plus years, Hassan and his colleagues have risked their lives providing food, clothes, and school supplies to the most vulnerable, among them, orphans and internally displaced persons.

“We also refer sick people to hospitals in Mogadishu, Jowhar, Galmudug and parts of Lower Shabelle and pay for their medical bills,” he adds.

Despite the good intentions, charity work in Somalia is not for the faint hearted and comes with enormous risks.

On October 14, last year, Ahmed survived one of the deadliest bomb attacks in the country’s history, which killed at least 500 people at Zobe junction in Mogadishu. The terrorist attack took place several metres from the office where he normally coordinates SPL’s charity work.

“The power of the blast threw me into the air before falling hard on the floor leaving me unconscious. I saw many dead bodies of people I knew after regaining consciousness. Many more were writhing in pain. It was traumatizing,” Ahmed recalls, while also thanking Allah for saving his life.

Though the tragedy left him shaken it also made him appreciate charity even more, after witnessing fellow citizens coming together to aid those injured and console bereaved families. 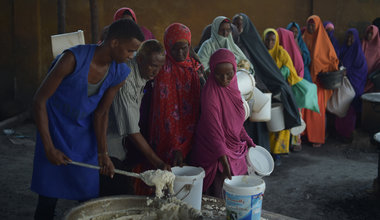 More difficult during the war

Overall though, Ahmed believes that the situation for charity work in Somalia has improved.

“Charity work was even more difficult during the civil war, pockets of the country were controlled by different warlords so moving from one area to another was almost impossible,” he explains.

In many instances, Ahmed and his colleagues had to negotiate with militia groups to allow them access to reach the poor in remote areas, where only a few aid workers dared to visit.

Though conditions in Somalia have improved, security remains a major challenge. According to the United Nations Humanitarian Coordinator for Somalia, Peter de Clercq, 74 violent incidents affecting humanitarian personnel, health facilities and assets had been registered in Somalia since the beginning of 2018. Seven humanitarian workers have so far died this year and another ten have been injured.

To overcome these challenges, Ahmed and his colleagues have managed to establish strong networks with community leaders in various parts of the country, who deliver aid on their behalf, reducing the risk associated with transporting humanitarian supplies by road.

“We even deliver charity through EVC [a type of electronic money transfer] to help reduce security risks,” he adds.

In addition, prior to delivering supplies in high risk areas, the SPL team engages elders and religious leaders to ensure they are aware of their plans to avoid being mistaken as intruders.

“Due to inter-clan rivalry in some parts of the country there is always a danger of being mistaken as belonging to a rival clan – a situation that can easily lead to one’s death,” Ahmed notes.

Six years ago, the United Nations established 5 September as the International Day of Charity to recognize the role played by individuals, the private sector, the civil society and philanthropic organisations in eradicating all forms of poverty.

According to Ahmed, it is a day that resonates in Somalia.

“This day has a lot of relevance to Somalia given that we are coming out of a long conflict and there is too much suffering and unemployment,” says the 62-year-old. “This makes charity necessary.”